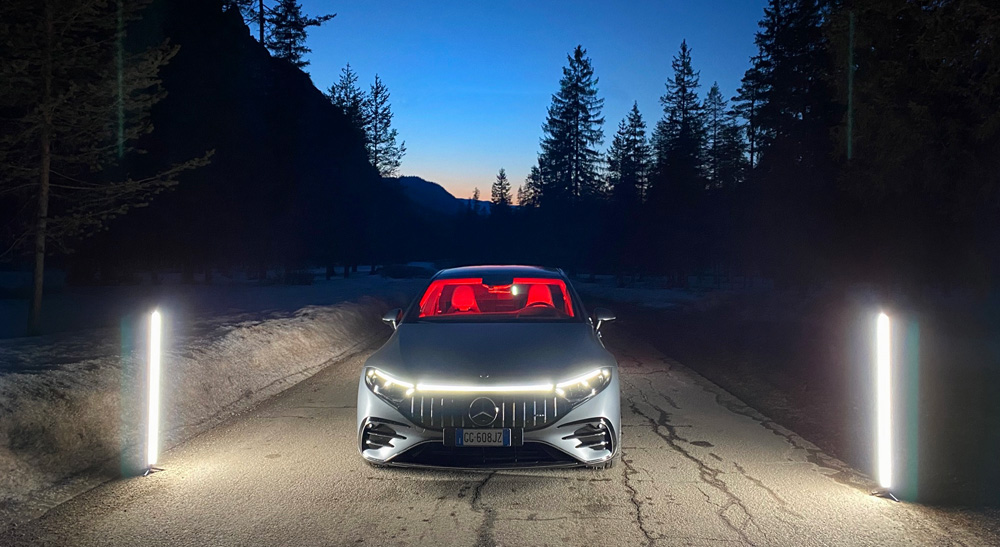 Featuring a special DJ set from the Lumen Museum of Mountain Photography rooftop on Mount Kronplatz (Plan de Corones), filming for the car spot took place over three days in the Trentino-South Tyrol region of Italy.

“Recognized worldwide for its prestige, charm and class, we wanted the campaign’s aesthetics to express the values of the German automaker’s philosophy,” begins Cestari.

“My choice fell on the Pocket Cinema Cameras as they are incredibly versatile, especially given the logistical challenges of the various mountain elements that made up a significant proportion of this shoot. Beyond that, I love their excellent cinematographic qualities,” he adds.

Shooting from sunrise to sunset posed some creative challenges. “In particular, the sun behind us was very harsh compared to the light on the mountains, as was the light in between the branches, causing strong areas of light and shadow,” explains Cestari. “However, the wide latitude and dynamic range of the 6K sensor ensured that we could balance these two completely different lights easily, while the Gen 5 color science helped to get the truest essence of the colors.”

The Pocket Cinema Camera 6K Pro was mounted to a car using a spring system to film the sequences of the Mercedes-AMG EQS 53 on the mountain path. In contrast, the promo’s interior sequences were filmed from a garage using an electronic dolly which helped to achieve elegant, lightly moving images.

According to Cestari, the production relied exclusively on LED lights inside the garage. “For example, we achieved the signature red on the dashboard using a dimmable LED tube from Astera, while an ARRI SkyPanel helped with the filling light,” he reveals. “Rating the camera at its native 3200 ISO, we were able to move comfortably in the dark dimness of the garage, while still getting a clean image thanks to the camera’s dual gain sensor.”

A drone carrying a Pocket Cinema Camera 4K rigged with a 10mm lens captured the promo’s many aerial sequences to give the campaign a more contemporary touch.

The production employed a ProRes 422 HQ workflow acquiring in 4K for UltraHD delivery while entrusting DaVinci Resolve Studio for editing and color correction. “I loved how the entire editing and color workflow worked so smoothly for us by staying in one software tool,” notes Cestari.

“I chose the Pocket Cinema Cameras because they are a compact and practical solution for handheld and aerial work while also working well on the gimbal system we used for tracking the car,” concludes Cestari. “They gave us all the versatility we needed in a package that was both lightweight and easy to transport around.”