As Senior Director of Global Innovation at Adobe, Michael Cioni lives and breathes digital cinema technology. A graduate of Southern Illinois University, Cioni went to Hollywood in 2003 and became a founding member of PlasterCITY Digital Post, one of the industry’s first digital file-based production houses. He quickly saw that digital technology was the future of video post-production

In 2009, Cioni founded Light Iron, with his brother, Peter. Light Iron’s non-traditional digital workflow was at the cusp of the digital cinema movement.

After a time at Panavision, Cioni joined Frame.io, which was acquired by Adobe a year ago. Since the acquisition, he has worked on Frame.io’s continuing development as a Camera to Cloud platform.

Frank Beacham: Michael, for those that don’t know, could you describe Frame.io?

Michael Cioni: Frame.io is a cloud operating system that’s designed to connect content creators with their collaborators and audiences. Those are the three legs of creating any form of media — those who make it; the ones collaborating on it; and then the audience who views it. Frame.io connects those three things together.

Frank Beacham: Frame.io skips the uploading, downloading, transfer and shipping parts of the traditional digital workflow, sending the media directly from the camera to the editor.

Michael Cioni: That’s exactly right. It’s what we call Camera to Cloud. Frame.io began about seven years ago as a pioneer in high-quality timecode accurate play buttons in the cloud. Now everyone does that. What’s new today is Frame.io is the first company to be able to record assets from digital cameras directly in the cloud. That’s the new frontier of collaboration.

Frank Beacham: You recently announced partnerships with RED and Fujifilm to send images and sound made with their cameras directly to the cloud. Typically, you use 5G cellular or Wi-Fi. How do you overcome the bottleneck of the high amount of bandwidth needed to send large files from a location?

Michael Cioni: A great question! Bandwidth is rapidly increasing. Look how it has increased in the past 10 years. Peplink makes a 5G industrial modem for professionals. You wouldn’t have it in your home, but a pro would use it. The technology allows people to upload large files because it has a stronger antenna and uses multiple 5G carriers. This is the kind of technology unlocking increased bandwidth going forward. Today, it is hard to send 8K files RAW files from anywhere, but you can send proxy or compressed files with metadata directly to an editor.

Frank Beacham: With all the metadata intact, an editor can begin work on a proxy file, even without the full bandwidth data.

Michael Cioni: That’s right. Because Frame.io will deliver proxy files pretty much anywhere. On the RED camera, I hit the record button and record a few seconds of video. Then when I hit stop, the camera begins uploading the file of the type and size I’ve selected. When I hit record again, it pauses the upload. When the camera is rolling, it’s just recording. When it’s paused, it continues the upload of the file. These are very big files. In a feature film, however, it takes 12 hours to shoot about two hours of footage. So that leaves 10 hours of upload time when the camera is not rolling. 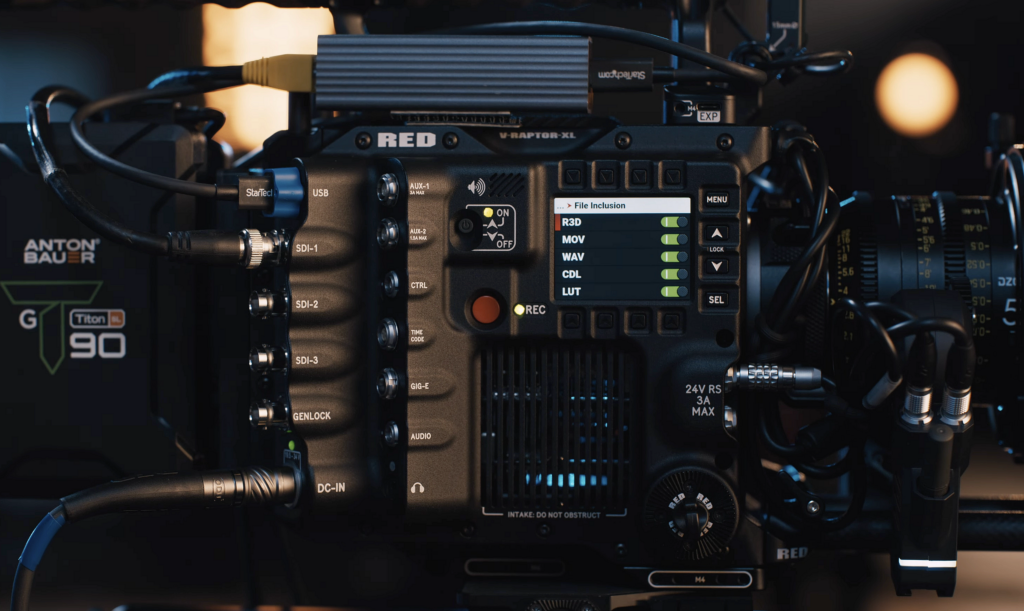 Frank Beacham: Ah, so between takes, the camera is continuously uploading those large files to the cloud?

Michael Cioni: It never stops. For large RAW files, we don’t expect that video to be sent today over cell towers. When working on a sound stage, most have hard lines for fast internet connections. In the field, ProRes is more appropriate for the available bandwidth today. That, of course, will change over time.

Frank Beacham: What other methods are available today to send camera data to Frame.io?

Michael Cioni: There’s a company called First Mile that uses satellites in low Earth orbit. This can be used to upload camera data directly the cloud. But even mobile and commercial hotspots can also be used.

In this photo, that’s me on a plane over the Atlantic Ocean flying 600 miles an hour while I was uploading H26 files to the cloud using the airplane’s hotspot. While it’s not practical, it proves a point that it’s not impossible to do. It’s in the telecom industry’s best interests to increase bandwidth and sell it to professionals because they are willing to pay for more bandwidth when it’s available.

Frank Beacham: In addition to RED, Frame.io just announced a partnership with Fujifilm. How does that work?

Michael Cioni: I’ve got my Fuji camera with beta software right here. I can take a still image and it is transmitted automatically to Frame.io. It can handle TIFF, RAW, JPEG, whatever. For professional photographers, it is a fairly immediate system. Filmic Pro even has Frame.io for iPhones. These smartphones are often being used for news. Think of what a television station could do using Frame.io with their reporters’ iPhones.

Traditionally, Frame.io was a video collaboration company. With Adobe’s help, being able to focus on stills is becoming a high priority. And Fuji really is coming out of the gates with a lead because they’re the first people to put this type of technology in a professional camera. The camera is tied directly to the cloud and to all collaborators in seconds. That is very new and different. This will be available from Fuji in 2023.

Frank Beacham: Are other camera manufacturers connecting with Frame.io?

Michael Cioni: I can’t disclose the names, but I can tell you there are 30 camera to cloud integrations in the works across many products in the market. This includes video, stills and audio. Any electronic assets in the future are going to the cloud. Electronic assets are not going to be local, saved, downloaded, uploaded and shared, which is the way it’s done today. In the future, all electronic assets will just be born in the cloud. 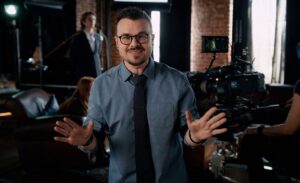 Frank Beacham: Let’s look five years ahead. Where do you predict Frame.io will be then?

Michael Cioni: Five years from now, the question won’t be am I going to be shooting to the cloud? The question will be whose cloud technology will I use. Bandwidth will catch up by then. There will probably be competitors, but Frame.io is the only tool that is a collaborative environment that includes stills, video, audio, RAW and metadata from independent sources.

For me, digital cinema has been my personal mission for 22 years. My career goal has been to help people on a set connect to post-production with the least amount of friction or time possible.

Creative people want to connect what they’re doing in the field or on the set with their editor. That’s it. Today, the convoluted workflow can take up to three days. For broadcast, it requires a satellite uplink, which is not cheap. When I started working with digital technology, I thought it would change the world. It has and now we’re on the path with Frame.io to make the process easier…much easier.