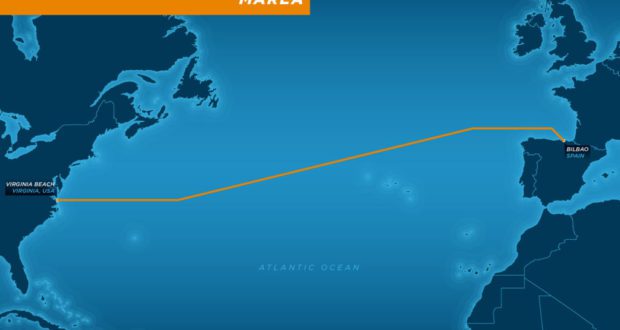 In an effort to meet the growing demand for high speed, reliable connections for Cloud and online services locally and abroad, Microsoft and Facebook jointly announced their latest step in building a global cloud infrastructure with the laying of “MAREA” – a new, state-of-the art subsea cable across the Atlantic.  MAREA, Spanish for “tide” will stretch from Virginia, US, to Bilbao, Spain, shuttling digital data at a rate of 160 terabits (Tbps) per second across 6,600 kilometers (4,101 miles) of ocean. Specifically, the cable will travel from northern Virginia in the US, a major junction point in the global internet, to Bilbao in Spain, and then onward to the rest of Europe, Africa, the Middle East and Asia. The companies said it will be highest-capacity undersea cable yet across the Atlantic, which is significant, given that there are already more than a dozen undersea cables between America and Europe. MAREA is also the third public investment in a trans-Atlantic cable by Microsoft.

This planned route is south of existing transatlantic cable systems that primarily land in the New York/New Jersey region. Being physically separate from these other cables helps ensure more resilient and reliable connections for the parties customers in the United States, Europe, and beyond.

Both companies have cleared conditions to go “Contract-In-Force” with their plans, and construction of the cable will commence in August 2016 with completion expected in October 2017.

Microsoft and Facebook are working with Telxius to lay and manage the cable, Telefónica’s telecommunications infrastructure company. Telxius will serve as the operator of the system and sell capacity as part of their wholesale infrastructure business. Facebook and Microsoft are ensuring they will get priority access to the bandwidth – in effect, guaranteeing the two companies will have their own private data highway. The project reinforces the trend where technology companies are assuming disruptive roles traditionally left to public utilities, multi-national conglomerates, the government, or in this case, undersea cables being traditionally laid by telecommunications giants. Think ride sharing companies like Uber, Lyft, BlaBlaCar, Carma, etc. to displace regulated cab companies; Amazon with its growing private delivery service and recent investment in the Hawaiki cable from Oregon and Hawaii to Australia and New Zealand; Facebook and its initiative to bring wireless internet to Africa (it has also invested heavily in “dark fiber”—unused terrestrial cables—so that it can control how its data moves from place to place more efficiently); Airbnb.com, Tripping.com, etc. to displace traditional rental and vacation agencies; and even Google, which has invested in two undersea cables that stretch from the West Coast of the United States to Japan, another that connects the US and Brazil, and a network of cables that connect various parts of Asia.

According to Frank Rey, director, global network acquisition, Microsoft Corp, he sees an ever-increasing customer demand for high speed, reliable connections for Microsoft cloud computing services, including Bing, Office 365, Skype, Xbox Live, and Microsoft Azure. As such, he adds that Microsoft is committed to building out the unprecedented level of global infrastructure required to support ever faster and even more resilient connections to our cloud services. This robust, global infrastructure will enable the company’s customers to more quickly and reliably store, manage, transmit and access their data in the Microsoft Cloud. He added, “In order to better serve our customers and provide the type of reliable and low-latency connectivity they deserve, we are continuing to invest in new and innovative ways to continuously upgrade both the Microsoft Cloud and the global Internet infrastructure. This marks an important new step in building the next generation infrastructure of the Internet.”

Microsoft and Facebook have designed MAREA to be interoperable with a variety of networking equipment. Continued Rey, “This new open design brings significant benefits for customers: lower costs and easier equipment upgrades which leads to faster growth in bandwidth rates since the system can evolve at the pace of optical technology innovation. This is critical to ensure the Microsoft Cloud continuously improves to provide the highest availability and performance our customers need for their mission-critical workloads and data.”