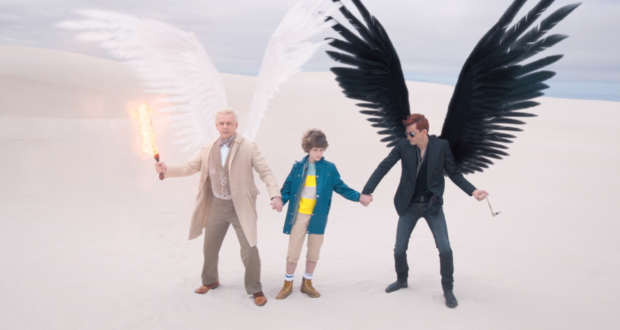 Adapted from the cult novel by Terry Pratchett and Neil Gaiman, and directed by Douglas Mackinnon, six-episode miniseries “Good Omens” follows demon Crowley and angel Aziraphale as they attempt to prevent the end of the world. In addition to occasionally manifesting large, feathered wings, the unlikely duo traverses surreal locales and encounter mythical creatures on their quest to recover the Antichrist, who happens to be an 11-year old boy. The series’ extraordinary visual effects are the handiwork of UK-based Milk Visual Effects, under the guidance of Milk VFX Supervisor Jean-Claude Deguara. While the Milk team was brought onto the production early – about two years ahead of delivery, artists ultimately had a five month post production period to create the series’ 650 VFX shots. 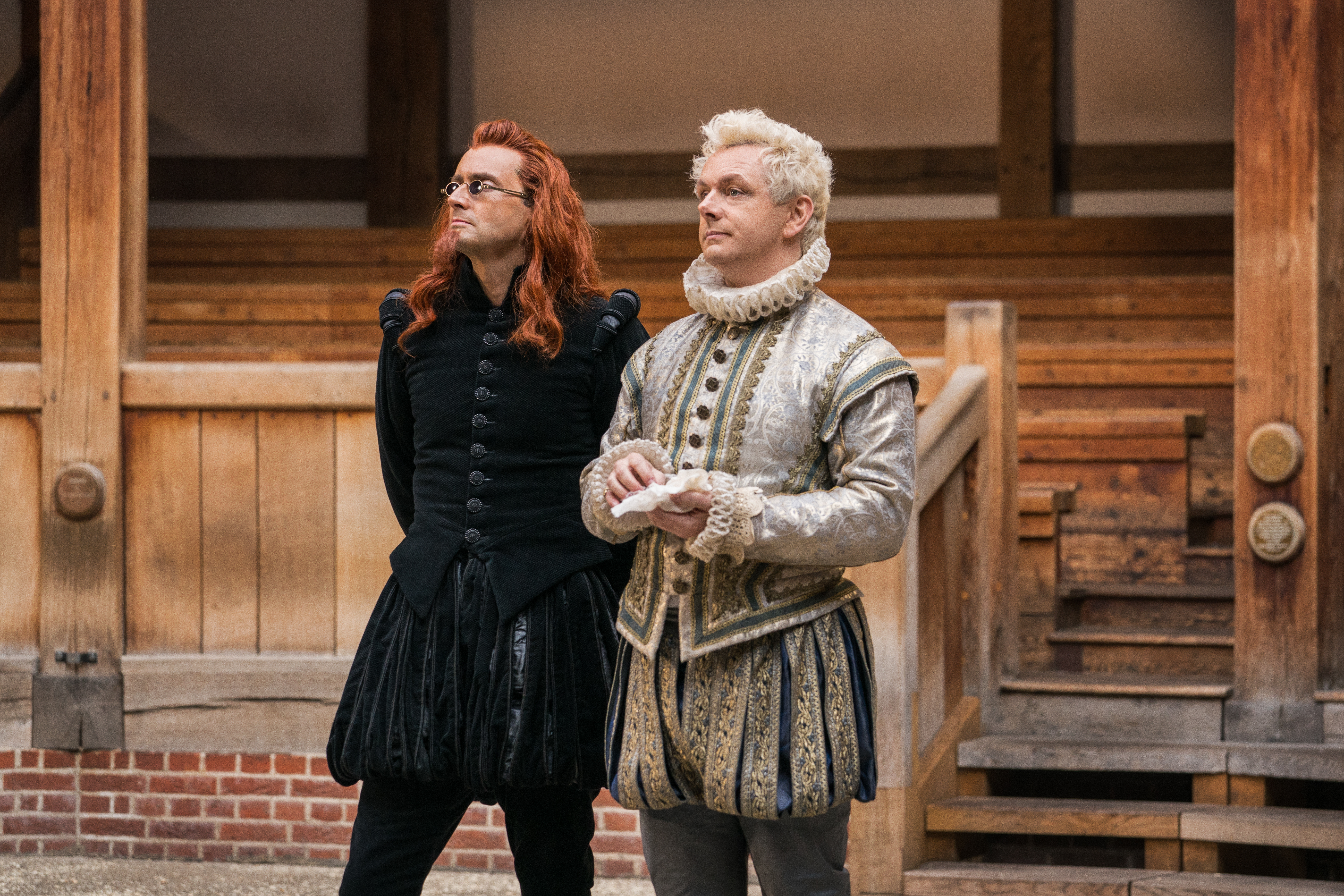 “Given our tight post production turnaround, AWS was essential to help get through the volume and sheer variety of work, from creatures to environments to effects. In particular, EC2 resources were used to render complex shots in scenes that required a lot of creative iteration,” said Benoit Leveau, Head of Pipeline and Systems, Milk Visual Effects.
The tools Milk used for “Good Omens” work include Autodesk Maya, Maxon’s Cinema 4D, Side Effects Software’s Houdini, Autodesk Arnold, and Foundry’s Nuke. Because of the project’s complexity and short deadline, AWS was used for rendering throughout production, averaging 15K cores per day of Amazon Elastic Compute Cloud (EC2) Spot Instances for 20 weeks. A total of 212K compute hours were completed with AWS using 96-core nodes with at least 384GB of RAM, and of the project’s 960K 3D-rendered frames, 60 percent were rendered with EC2 resources. Milk hit peak core usage early in the project, using 83K simultaneous cores to render the magnificent feathered wings of Crowley and Aziraphale. 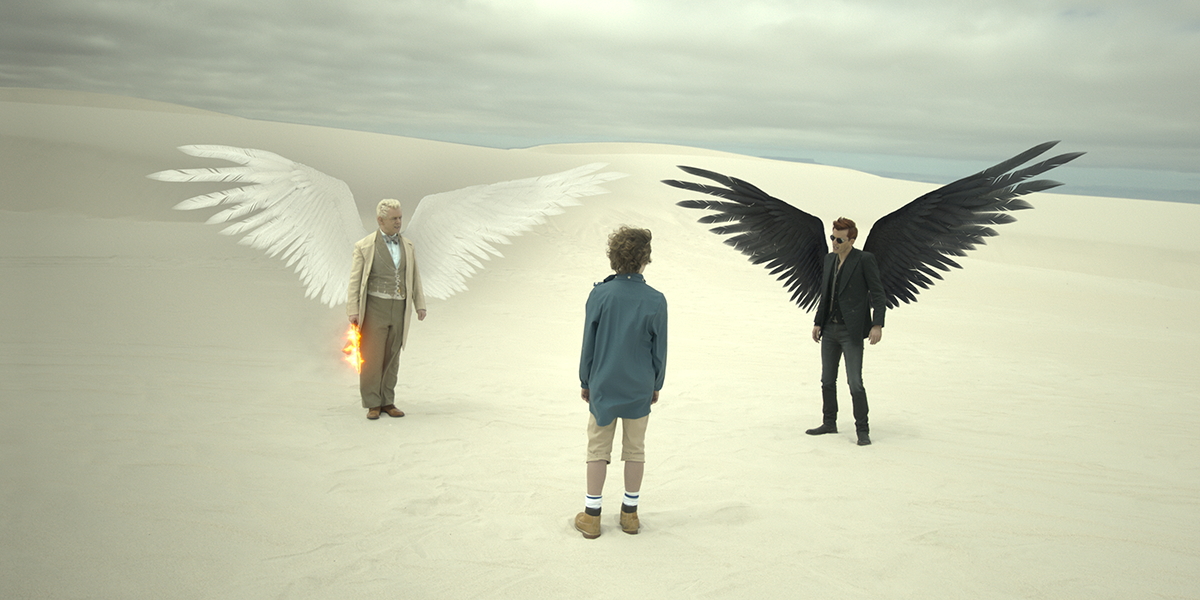 “We weren’t initially planning to render the wings in the cloud – but as we developed them and they became more intricate, it became clear that we would need additional nodes beyond our in-house capacity for this asset,” explained Leveau.
Milk artists built each feather for Crowley and Aziraphale’s wings using swans as a guide, both aesthetically and for bone structure. Artists created the wings’ geometry first to provide a map for the groom team. The wings’ structures were laid out in an anatomically correct way, with long finger-like primary feathers on the end, smaller secondary feathers in the middle, and fluffy feathers near their origination point. From there, the wings were re-groomed and modeled, then passed to the rigging team to ensure the feathers folded correctly and to get a feel for the overall effect. Texturing was done through shaders, providing artists with complete control over color variants, though striking the right balance of iridescence on the black feathers and a discernible level of detail on the white feathers proved challenging.
Leveau shared, “We spent time in look development tweaking the shaders and when we got to actual shot production, we worked very closely with Neil Gaiman (who was showrunner as well as creator of “Good Omens”) to get a look that he and Douglas Mackinnon were really happy with. Some of the shots needed to have a bespoke groom set up so that we could sculpt the groom, making sure that none of the detail was lost and that the wings looked and felt a part of the actors throughout the scene.” 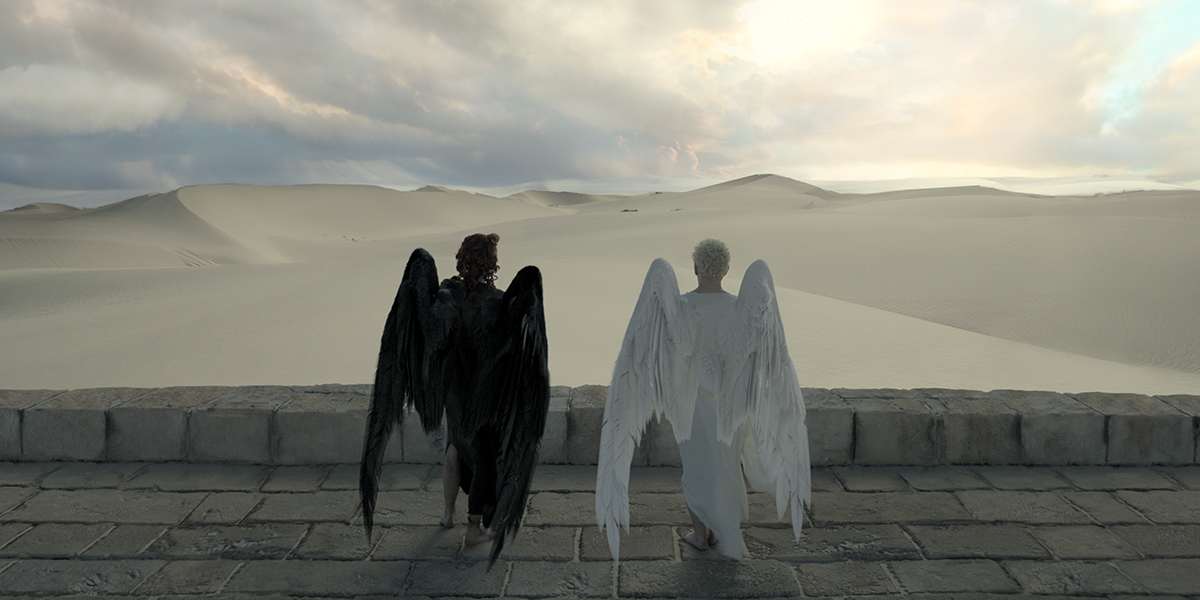 EC2 resources were also key for rendering Satan and the complex FX surrounding him as he bursts from the ground, the Kraken scene, and the wall of fire on London’s M25 motorway. Towering at 400 feet, Satan was created to make an instant impact, considering he appears briefly for one long sequence. Milk built a basic model for Satan, featuring a large, muscled, red body and horned crown, then incorporated the facial characteristics and movements of actor Benedict Cumberbatch, who provided the voice. The Milk animation team, led by Joe Tarrant, was then tasked with finding the right movement timing to authentically convey Satan’s immense scale. Milk’s effects team, led by James Reid, completed Satan’s surrounding environment, layering multiple effects simulations to shatter the CG airfield tarmac and generating clouds of smoke and dust. Milk’s Kraken pays homage to Ray Harryhausen’s iconic work on “Clash of the Titans,” and for those scenes, the team built upon the complex water simulation system that it originally developed for CG ocean work on “Adrift.” Interior boat shots were full CG, including water effects and the tentacle animation. To create the wall of fire sequence, Milk was given a still photo of a napalm strike for reference, then translated that look in a way that maintained the appearance of constant heat and size by creating a detailed explosion simulation that was built into a loopable asset. 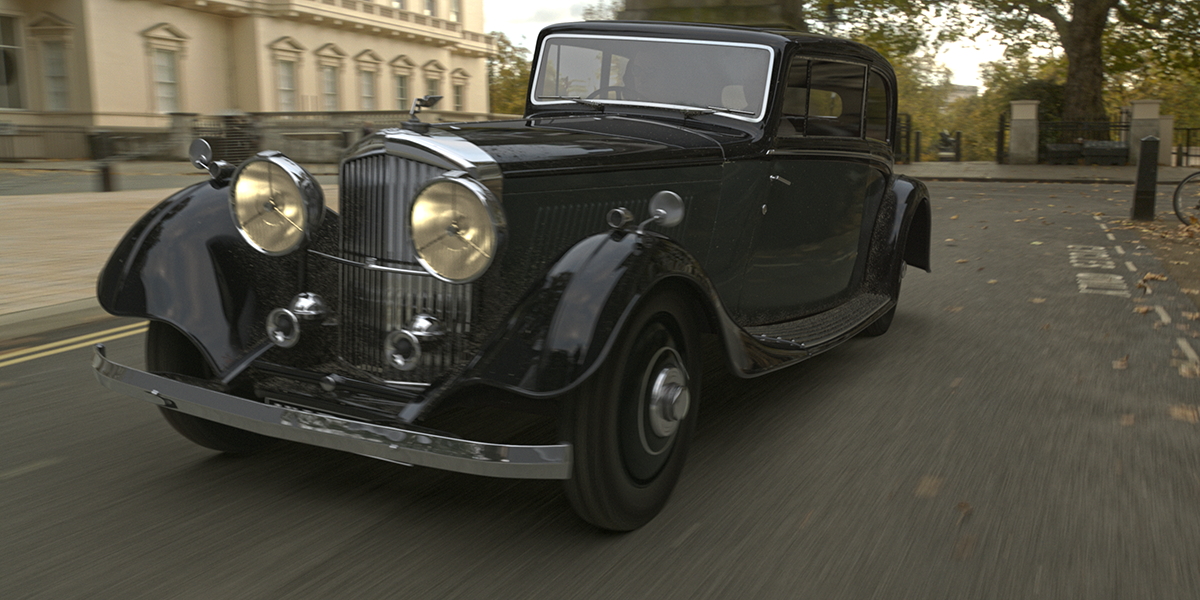 “Fast moving objects are always a challenge when simulating fire as the distance travelled between frames requires a huge number of sub steps to create a smooth look,” said Leveau. “In the case of the moving Bentley, our effects team had the additional problem of the collision object moving through the emitted fire volume and erasing itself. To work around this, they removed a proportion of the car’s translation from its original animation and created a much more manageable simulation environment. This translation was later restored before rendering.”
“Good Omens” debuted on Amazon Prime Video on May 31, 2019. For more info and episodes, visit: www.amazon.com/dp/B07FMHTRFF