Miller Camera Support Equipment Gets Two Thumbs Up from Director Shane Peel on Premiere of His Feature-Length Documentary, Snowsurf

HOKKAIDO, JAPAN, FEBRUARY 10, 2016 – For the past three years, award-winning Australian surf photographer and writer Shane Peel has dedicated his life to making his first feature-length documentary, Snowsurf. With the documentary’s release, Peel feels that part of its success is due to the stunning visuals he was able to achieve with his Compass 12 Solo 75 Carbon Fibre System from Miller Camera Support Equipment, a leader in the production of innovating camera support solutions. 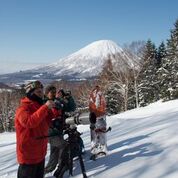 Snowsurf explores the history of an unusual snowboard subculture that exists in Japan’s northern-most island, Hokkaido. The film has played to enthusiastic audiences at festivals in Europe and North America and is the number one selling Japanese snowboarding film this winter. The film is also available on VOD through Vimeo, iTunes, etc.

As a still photographer, Peel wanted his first documentary to have the tripod-mounted look of a print coming to life. Many of the shots are strictly tripod mounted, but Peel also relied on key camera movements that typically involved two-axis pans to help him achieve the “right feel.” The Compass 12 Solo 75 2-Stage Carbon Fibre System was perfect for his needs.

“My Miller gear worked incredibly well once again,” says Peel, a long-time user. “The Compass 12 Solo 75 2-Stage Carbon Fibre System is the perfect combo for a little cine rig like the RED I used on Snowsurf. It consistently provided the same reliable smooth action that I’ve become accustomed to from Miller to help me capture the action shots that everyone is talking about in Snowsurf. I am very proud of the film and all of the people and equipment it took to bring this beautiful vision to the screen.” 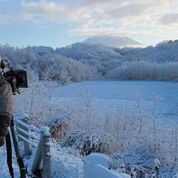 One of Peel’s chief requirements for filming in Japan’s Hokkaido Mountains was the size and weight of his gear. “Weight is crucial when you are hiking for hours at a time, but it is always a trade-off for stability,” he says. “It plays a large role in deciding what gear to use for human-powered productions like mine. Miller’s lightweight Compass Carbon Fibre System was the obvious choice. The really big plus of the system was the weight to stability ratio – even when it was overloaded.”

“We are happy to see that Snowsurf has premiered to great reviews and that Miller could be a part of that success,” says Charles Montesin, marketing manager, Miller Camera Support Equipment. “Miller’s Compass 12 Solo 75 Carbon Fibre System was designed for applications such as this. The lightweight design, along with selectable smooth pan/tilt drags, illuminated bubble level and quick release sliding camera plate with 60mm travel, were able to withstand shooting through such harsh, snowy conditions.”

Peel has been fond of Miller equipment since he first started in the industry over three decades ago. “As an Aussie photographer, Miller is the only way to go,” says Peel. “Aussies invented the fluid head and we are proud of our inventions in Australia. I have been using them since I started capturing images 35 years ago and will continue to do so in the future.”

Snowsurf made its debut at the Niseko Chomin Centre in Niseko, Japan, on December 11, 2015. To read more about Snowsurf visit its Facebook page at: www.facebook.com/pages/Snowsurf/672189579472050?fref=ts.