SYDNEY, FEBRUARY 16, 2016 – Ever since she was a little girl, Clare Thurkett had a wild imagination. For her, recording moments was a way to bring that imagination to life. At the age of 15 she left school to study film and media at the Sydney Institute Film Academy to help quench that creative thirst. Thurkett graduated last year and now at the age of 18, has been fortunate enough to work on several substantial projects, including television programs, as well as commercials, music videos and short films. While her projects may change, Thurkett never leaves home without her AIR Fluid Head and Solo 75, 3-Stage Carbon Fibre Rapid Lock Tripod from Miller Camera Support Equipment, a leader in the production of innovating camera support solutions. 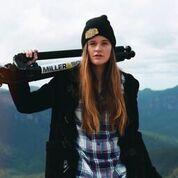 Thurkett was first introduced to Miller during her studies at the Sydney Institute Film Academy and has been using its products ever since. Her AIR system has always been close by. “The benefits of using Miller equipment cannot be understated,” says Thurkett. “It’s lightweight, easy to set up and has incredibly smooth tilt and pan. I can get the shots in the bag faster due to the easy setup. What more could you want in a tripod?”

With a diverse portfolio, Thurkett has already gained an impressive reputation, especially with her work with iTheme Modele Photography & Video, a company that shoots and directs show reels for models. It is here that Thurkett uses her full Miller arsenal to capture and deliver imaginative photography and video of her subjects. Thurkett uses her Miller gear along with a Canon EOS 5D Mark III camera, Canon EF 24-105mm f/4L IS USM zoom lens, Canon EF 50mm f/1.8 II lens, a jib arm and camera slider.

Miller’s AIR Fluid Head is perfect for any new entrant into videography. It features a payload range from 2-5 kg (4.4-11 lbs), a two position counterbalance system and caliper disc brakes. Weighing 1.4 kg (3.1 lbs), it is perfect for any run-and-gun applications. The 75mm mounting with bubble level and quick release, sliding camera plate allow for fast set-ups.

The Solo Rapid Lock tripod series are the most versatile tripods available to videographers and cinematographers around the world. Using the most advanced carbon fibre tubing, Solo Rapid Lock tripods give users a solid operating height in a lean and light design. In addition to the sleek telescopic body, the 3-stage Solo 75 tripod provides a greater height range with a lightweight 75mm bowl.

“The fact that the Miller SOLO tripod legs can extend out to the point where they are just about flat on the ground is amazing,” adds Thurkett. “I can get those low angle shots so easily. You can’t compare Miller. It’s an all-around amazing company that makes incredible products.”
About Miller Camera Support Equipment
Founded in 1954, Miller Camera Support Equipment designs, manufactures and delivers professional fluid heads and tripods to the film and television industry, providing support for the world’s leading camera operators. Celebrating more than sixty years in the industry, Miller is a longtime, global leader in the field of contemporary camera support and holds the first patent for fluid head design for film cameras, which it obtained in 1946. Today, Miller’s tripod and camera support systems are frequently used during electronic news gatherings (ENG), electronic field production (EFP), and digital video applications by the world’s leading networks, production houses, corporate, educational and government institutions in more than 65 countries. For more information, call +61 2 9439 6377 or visit www.millertripods.com.