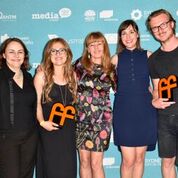 The Miller Australia Award for Best Cinematography in an Australian Short Film allows the short film community to celebrate and recognize achievement in a specific area of craft and skill. Jurors for this award included Head of Business and Audience at Screen Australia Richard Harris, director/writer Jocelyn Moorhouse and actress/writer Susan Prior. 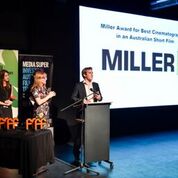 “The panel was impressed by the incredible cinematography on display in many of the shorts, so it was a highly competitive field and a seriously tough decision to select a winner,” says Harris. “In the end we were impressed by not just the beautiful images in Reg Makes Contact, but also because of the film’s wonderful use of light throughout. Because in the end, the capture and manipulation of light is really what being a DOP is all about. This film moved from confined spaces to outer space, all the time playing with different direct and dappled lighting textures, successfully conveying the protagonist’s changing state of mind throughout, and ultimately capturing the sense of wonder that was so intrinsic to the film’s story.” 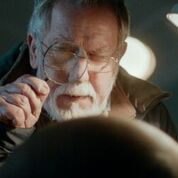 Reg Makes Contact follows a space-obsessed elderly man that finds a mysterious object from the sky on the eve of being admitted to a nursing home. “It is an honor to be the recipient of the Miller Australia Award for Best Cinematography,” says Reg Makes Contact cinematographer Michael Latham. “I would like to thank FLiCKERFEST and Miller for their encouragement and support for up-and-coming filmmakers. It’s great to see a renowned cinema brand like Miller supporting the short film medium.”

“This award is important to FLiCKERFEST, as it allows us to celebrate and recognize filmmakers who are not the director and producer, and their achievement in a specific area of craft and skill in a short film,” says Annie Parnell, FLiCKERFEST Manager.

Miller’s AIR Fluid Head is perfect for any new entrant into videography. It features a payload range from 2-5 kg (4.4-11 lbs), a two position counterbalance system and caliper disc brakes. Weighing 1.4 kg (3.1 lbs), it is perfect for any run-and-gun applications. The 75mm mounting with bubble level and quick release, sliding camera plate allow for fast set-ups.

“We are very proud to be a part of this great honor and to present this award to Reg Makes Contact,” says White. “FLiCKERFEST gives amazing support to all short filmmakers around the world and we are delighted to be a part of it. By awarding the people involved with Reg Makes Contact with an AIR Tripod system, we hope to continue to inspire their creativity through our camera support solutions that will provide them with the ‘right feel’ Miller has come to be known for.”

What began as a small local festival in 1991, FLiCKERFEST has grown to become Australia’s only Academy® accredited and BAFTA-recognized competitive International Short Film Festival with entries coming from filmmakers across the globe.