PARK CITY, UT, JANUARY 26, 2016 — When Levi Whitney, owner and creative director of Uphill Cinema production company, was enlisted to create a video demo showcasing one the latest mirrorless cameras, he knew he needed a rugged, compact and multi-tasking tripod custom built for the smaller payloads of DSLRs and HDV cameras. He chose the AIR CF2 Carbon Fiber System from Miller Camera Support, LLC, a leader in the production of innovating camera support solutions, to put the camera through its paces in the ideal professional context. 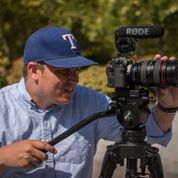 A three-year Miller tripod user, Whitney selected the AIR CF2 Carbon Fiber System to showcase the capabilities of the new Sony Alpha 7R II in his “Camera Review” project. The AIR proved to have the reliable, lightweight setup he needed to take on the active outdoor Utah-based events he was shooting for the video. It saw the most action during two of the larger events he shot with the camera — the Autumn Aloft, a popular hot air balloon festival held in Park City, UT, and the XTERRA Utah Off-Road Triathlon, which required him to move around swiftly and constantly just to get the shot. 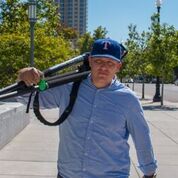 “Miller [Camera Support] solutions are professional,” says Whitney. “The fact that the products are a professional setup means you can pick it up and go, you can throw it in the bag, and then just run-and-gun. It’s amazing. Basically, during these events, I was just running and flying to the next place, which is what made the AIR so good to have along. It’s so light and versatile for those types of projects.”

Whitney says one of his favorite things about Miller tripods is they have the “right feel,” as the company’s tagline implies. “The feel of the pan and tilt is super nice,” he explains. “You can feel this drag that’s not this big clamp down, it is just this different feeling when you pan and tilt on it. You can feel it instantly.”

For the XTERRA triathlon, Whitney had to follow participants competing in a 1,500-meter swim, a 28-kilometer bike ride and a 10-kilometer trail run. In addition to the lightweight feel of the AIR’s Solo 75 2-Stage Carbon Fiber Tripod body, Whitney relied on its spiked feet for secure positioning. “Before the XTERRA shoot, I never really thought too much about the spiked feet, but now I use them almost every time,” he says.

Whitney also extolled the physical flexibility of the AIR CF2 Carbon Fiber System, noting how helpful it is during a shoot that the tripod can get extremely low or high. “You don’t really need a hi-hat if you get one of these tripods,” he says. “It can get that low and you can get those low shots, and be completely fine. The fact that you can get the feet nice and super wide is a huge advantage.”

Whitney is also quite fond of the way Miller Air locks. “It is one of my favorite things,” he says. “I know it sounds crazy but when you lock the pan and tilt, it is not using screws to pinch down on anything. It is using a disc break that grabs. So it is really easy to get them to stop. You don’t need to use your hand; you just need to use your thumb to flip it and lock it.”

Whitney is quick to point out how valuable the AIR could be not just in the hands of his seasoned colleagues but for younger videographers just starting out as well.

“The AIR tripod is built in such a way that if this was out years ago and I was buying my first tripod, I would have saved a little extra money and just bought it because it would last me years and years,” he says. “I really think it is targeted to the professional and then also that kind of up-and-comer videographer and cinematographer that doesn’t want to break the bank but still get amazing quality.”

To learn more about Whitney and his upcoming projects and view more of his creative content, visit his company page, Uphill Cinema: www.uphillcinema.com.