SYDNEY, APRIL 4, 2016 – When accomplished director and cinematographer Ketch Rossi looked to upgrade his current tripod system, he decided on the Cineline 70 Fluid Head by Miller Camera Support, a leader in the production of innovating camera support solutions. Having only used the Cineline 70 for a short time, the industry veteran quickly learned that the fluid head could offer a setup he had never seen before in his 25 years in the film industry. 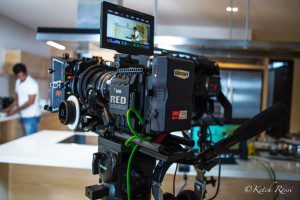 The Cineline 70’s unique capabilities became apparent during Rossi’s first venture with it while on a long-term film project on the African island nation of Mauritius. For this project, Rossi was asked to achieve some acrobatic shots at difficult angles, relying on the locking mechanisms of the Cineline 70’s Mitchell base. He would sometimes find himself leaning over the edge of a balcony three stories above his subject, at a 90-degree angle, depending on the locks to hold his camera in position. 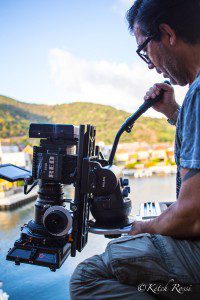 “I placed my trust in the reliability of the locking mechanism of the Cineline 70 and the Mitchell base, which was what allowed me to take some of my best shots,” Rossi explains. “In particular, a shot from the edge of a balcony off the third floor from the Marina level, where without any grip I had no choice but to place the Trost Motion Slider system on the Miller Studio tripod via its Mitchell mount. The lock on the Miller Cineline 70 Fluid Head worked extremely well, especially when I was facing 90 degrees down to film the scene set up at the edge of a small pool. My director was extremely happy I got that shot – and so was I! 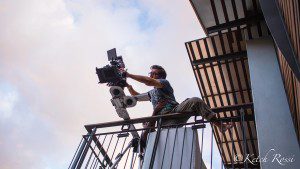 “The Miller Cineline 70 brings my experience with the Miller line of fluid heads to another level,” continues Rossi. “It is a product that I am certain I will not step away from. This system is a sublime marriage of technological advancement and ergonomics designed to let the cinematographer worry about the shot and be allowed to follow the subject with ease with any given camera setup – from a slight system of about 10 pounds, to a fully loaded system of 50 or more pounds.” 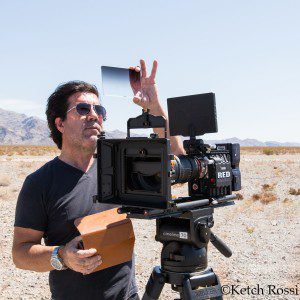 Another one of Rossi’s favorite features of the Cineline 70 is the ergonomic controls that allowed him to achieve Miller’s famous “right feel.” “The locations and size of the control knobs are great and allow me to make fast, on-the-spot adjustments while not taking my eyes or focus off the subject I am filming,” adds Rossi. “This is by far what I find most useful. Every shot I have been composing with it is very high quality, which is a result of how great this system is. It has taken my work to new heights.”

The Cineline 70 is purpose-built for film and digital production cinematographers who desire a new dimension in professional camera support. It is constructed of corrosion-resistant alloy and offers advanced precision fluid drag control with ultra-soft starts, smooth stops and perfect diagonal drag transition, as well as counterbalance systems with “all-in-one-location” control layout. The Cineline 70 is set to accommodate industry-leading camera mountings, including Arri, Sony, RED, and Canon, and it also features an Arri-compatible, side-loading camera platform, along with an optional, easy-to-fit Mitchell Base Adaptor to suit traditional Mitchell Flat Base tripods. Additionally, the fluid head comes equipped with an extended sliding range to promote quick and seamless rebalancing of the rig when lens and accessory changes result in weight distributions. As an added bonus, the fluid head offers dual side mounts for monitors and accessories, as well as an assistant’s box front mount.

“I loved the Miller Compass 25, which I used for several years around the globe, from the extreme cold in the mountain ranges atop the Italian Alps, to the intense heat of the deserts of Dubai. I never had a single issue with that system, so Miller gained my absolute trust. When the Cineline 70 came out I was ready for it. I use it in confidence knowing that this system will also prove to be as solid and dependable as my previous Miller system.”

Rossi moved to Hollywood in 1989 from his home country of Italy to pursue his carrier in the film industry. He has worked as a photographer, cinematographer, director and producer for the past 25+ years in various productions around the globe. Learn more about his work at www.ketchrossi.com.