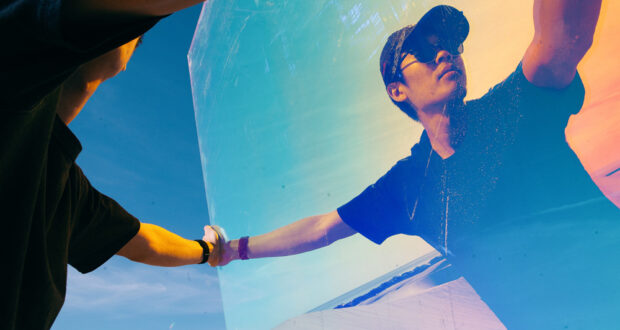 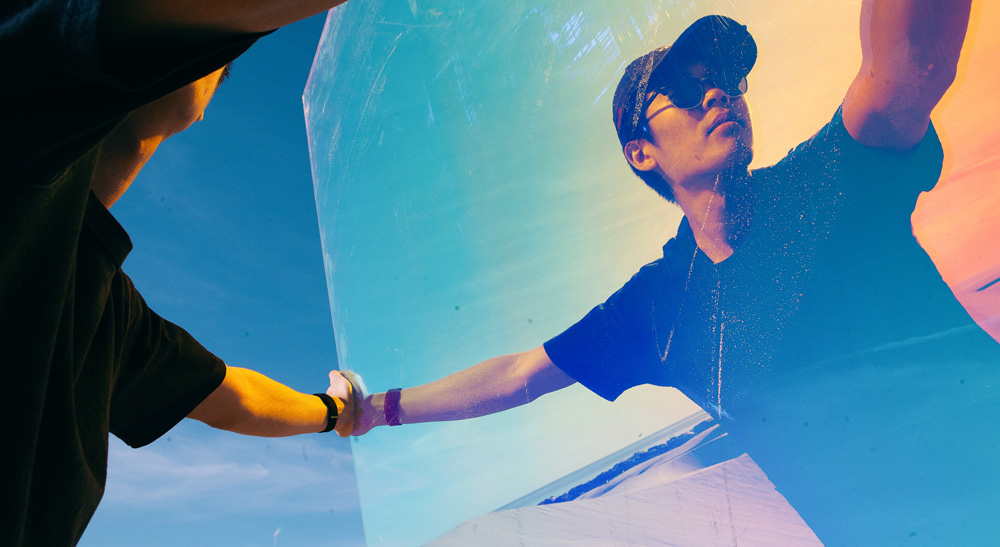 MisterWives is an American indie pop band that has gained an international following. “Rock Bottom” is the highly anticipated first song from the band’s upcoming album. Shot and graded by Jade Ehlers, the video for “Rock Bottom” premiered in late April 2020.

In the video, the band’s lead singer, Mandy Lee, is seen walking through the sands and hills of a beach in California before walking through a mirror and finding the rest of her band on a dance floor. The video combines brilliant neon colors and different textures with dark and gray backgrounds at the beginning as Lee goes from dark times to eventually breaking through the mirror and shining with her band on a swirling dance floor.

To capture the look the band wanted, production was done in a number of different locations and times of day. This included shooting on a remote beach and in the California desert, where Ehlers and his small crew had to hand carry in all of their camera gear, lighting, which included a 100 pound mirror.

“We wanted to go for a darker tone, with the neon colors in the darkness that showed that light can shine through even the dark times. The song is about showing it is more about the journey to get to the end of the tunnel than just sitting in the dark times, and the video had to capture that perfectly,” Ehlers said.

The high dynamic range and ability to shoot in low light of the Pocket Cinema Camera 6K, along with the camera’s small size, were essential in allowing Ehlers to shoot at the locations that were best for the song.

“Honestly, because of how different all our scenes were I knew we needed a camera that had great low light that would allow us to be sparing with light since this shoot had a lot of hiking involved,” he said. “The beach location was quite crazy, and we hiked all of the gear in so having a small camera bag to carry everything in was great.”

“Since there was a lot of hiking to locations and needing to be light with a small crew it allowed us to use smaller rigs for stabilization’s and not have a 20 to 30 pound rig. I think we walked around 13,000 steps in the dunes! And the mirror/plexi was about 100+ pounds and we carried that a mile in the desert to set up that shot. It was worth it though! Blood sweat and tears included,” Ehlers continued.

Throughout the video, Ehlers had to adjust for very different textures and unexpected lighting problems. This included having to have the lead singer’s bright green puffy dress against a gray background in the desert. Another challenge came from shooting the dance floor scenes, where the black floor was not outing as much light as expected. To compensate and get the shots needed, Ehlers used the Pocket Cinema Camera 6K’s 13 stops of dynamic range and dual native ISO up to 25,600 along with the Blackmagic RAW codec for high quality lifelike color images and skin tones.

“Because of the bit range of the camera’s sensor I was able to qualify the dress to make it pop a bit more, which was amazing and saved me a lot of extra work. And the dance floor scenes were great but were also harder than we imagined, so we had to push the camera higher on the ISO so make it exposure we needed. The camera gave me the power to make both of these shots pop out visually,” he continued.

Product photos of Pocket Cinema Camera 6K, DaVinci Resolve Studio, as well as all other Blackmagic Design products, are available at www.blackmagicdesign.com/media/images.