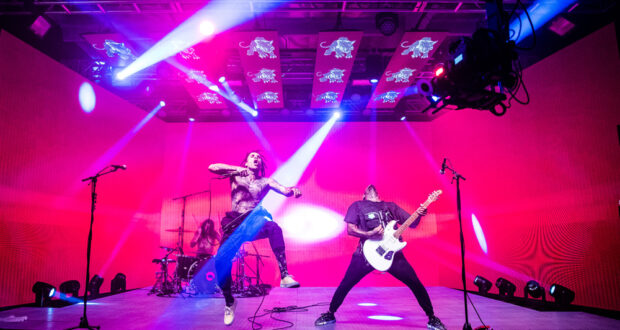 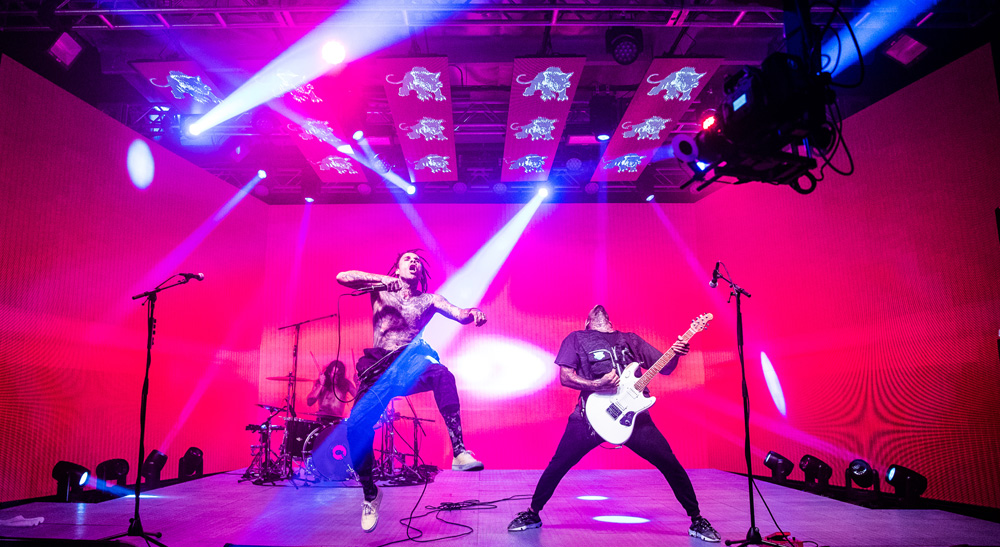 When restrictions were placed on live events because of the COVID-19 pandemic, MixOne Sound’s Video Partner & Director of Film Kevin Garcia and his team came up with a creative way to keep live performances going while complying with social distancing guidelines by building a stage where artists can perform safely on site while the performances are live streamed to remote audiences or recorded. The new setup includes a broadcast control room, as well as a main sound stage featuring a 40’ by 40’ production area, 48’ LED wall, full lighting, 21’ jib, and full streaming and recording setup.

A combination of Blackmagic Pocket Cinema Camera 4K and 6K, URSA Broadcast and URSA Mini Pro G2 cameras feed into the broadcast control room’s ATEM 1 M/E Production Studio 4K live production switcher complete with ATEM 1 M/E Broadcast Panel, and a program SDI feed passes through a DeckLink 4K Extreme 12G capture and playback card from the streaming software to an in house television that’s just off camera, so the artist knows when they are truly live.

The control room also features a HyperDeck Studio Mini recorder for backup recording or for clients who want a program cut of the show right away, as well as a Video Assist 7” 12G HDR monitor/recorder for a backup recording of the program out feeds. While there is a separate audio room, the team uses a Blackmagic Audio Monitor 12G in the broadcast control room for monitoring audio, along with a Teranex Mini Audio to SDI 12G converter using AES for a cleaner sound for the streamed audio.

“When it came time to purchase additional cameras for our space, I knew the URSA Broadcast would be the best addition as I already had an URSA Mini Pro G2 and the Pocket Cinema Camera 4K and 6K,” said Garcia. “Everything is compatible, and with all of my hardware being interchangeable, it made my personal transition from field to studio incredibly seamless. I appreciate the ease of networking all of our switching and broadcast gear together. I can control it all from my office behind a closed door. I’m a camera guy at heart, before anything else, and being able to keep the quality high even when dealing with low bit rates from many stream platforms is something Blackmagic Design has helped us to achieve.”

For the live streamed performances, MixOne Sound can provide direct streaming to the artist’s social media channels or to a streaming/ticket service hosting the stream. For pre recorded performances, Garcia is in charge of most of the post production, and he has integrated DaVinci Resolve Studio into his post production workflow for color grading and editing.

“I try to shoot in Blackmagic RAW any time we are doing post production,” explained Garcia. “I personally handle most of our post production and editing, so the flexibility and control that comes with Blackmagic RAW is something I never want to pass up. There is always an element of human error when shooting, even something as simple as over or under exposing, and Blackmagic RAW has saved me from those problems in the past. The quality is amazing, and it has become a natural part of my workflow.”

“Two weeks into the shutdown and with no end in sight, we knew we had to do something,” concluded Garcia. “We determined that since we already owned so much gear, it wouldn’t take much to build it into a stage if we restructured our warehouse. MixOne Sound Stage, supported by Blackmagic Design, has allowed us to adapt our business model and provide our clients with the ability to stay engaged with their fans.”