As part of its requirement to manage a greater amount of content moving forward, and upgrade the facility to 3 Gb/s, MLB Network has added additional NVISION 8500 Series routers, equipped with fiber optic connectivity, to its workflow that was already managed with NVISION routing. The expanded system now includes two NVISION 8576 (576 x 1152) and one NVISION 8280 (288 x 576), with fiber tielines.

Mark Haden, VP, Engineering and IT at MLB Network, said, “When our all-HD facility first went live in January of 2009, our infrastructure was supported at the core with a Miranda NVISION 8576 router. It served not only as the fulcrum of our production environment, but master control and all broadcast elements. 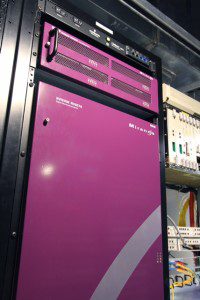 “At the time we thought we’d never need another router, but rapid expansion meant that we found ourselves needing more sources and destinations than we ever could have imagined.  The most important thing to us is that we didn’t have to decommission the 8576 – we simply added another one.  We’re still using the original router, which is the beauty of the NVISION routers. They grew and scaled, matching our growth.”

The original NVISION 8576 now serves MLB Network’s operations functions while the new NVISION 8576 is dedicated to production. Both are linked via Miranda fiber optic, bidirectional tielines, including a third NVISION 8280 router that now sits at the heart of the network’s distribution function. 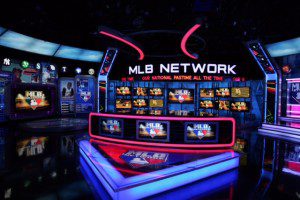 The direct lines of fiber connectivity that link MLB Productions and MLB Network via NVISION routers have substantially streamlined the ability to move, manipulate and manage high quality content between the two.

Haden added, “The amount of content and metadata associated with all of the baseball games we ingest, catalog and broadcast is immense, so reliability and expandability are crucial. The NVISION routers deliver system resilience, simplify signal management and provide far lower return losses through high-density connectors, audio concentrators and direct fiber connectivity.”

Marco Lopez, Miranda’s president, said, “As production and content requirements continue to grow, it’s essential that the infrastructure provides a level of capacity that facilitates growth, not cap it. MLB Network is a prime example of how well-planned, well-executed expansion is done, and we’re excited to have helped make it happen.”

About Miranda
For over 24 years, Miranda Technologies (www.miranda.com<www.miranda.com>) has been a leading worldwide provider of hardware and software solutions for the television broadcast, cable, satellite and IPTV industry. Its solutions span the full breadth of television operations, including production, playout and delivery. With a wealth of experience in delivering IT-based and traditional television systems, Miranda leverages its expertise to create the highest quality solutions available and delivers, deploys and supports them with a company-wide commitment to keeping the customer first. Miranda was acquired in July 2012 by St. Louis-based Belden Inc. and is the cornerstone of its broadcast division. Belden is a worldwide leader in the design, manufacture and marketing of cables, connectivity and networking products for many industries including broadcast, entertainment, consumer electronics, education, transportation and industrial automation. For more information, visit www.belden.com<www.belden.com>.
Belden and Telecast Fiber are trademarks or registered trademarks of Belden Inc. or its affiliated companies in the United States and other jurisdictions. Miranda, NVISION are trademarks or registered trademarks of Miranda Technologies Partnership. All rights reserved. Belden Inc., Miranda Technologies Partnership and other parties may also have trademark rights in other terms used herein.