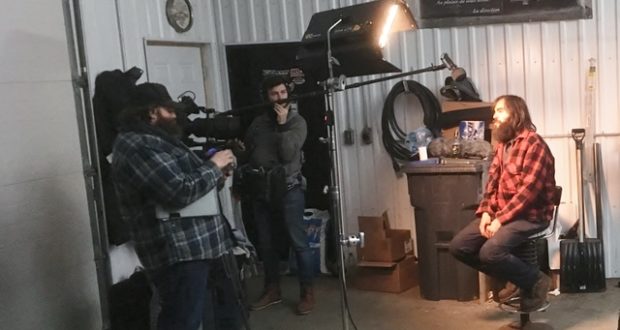 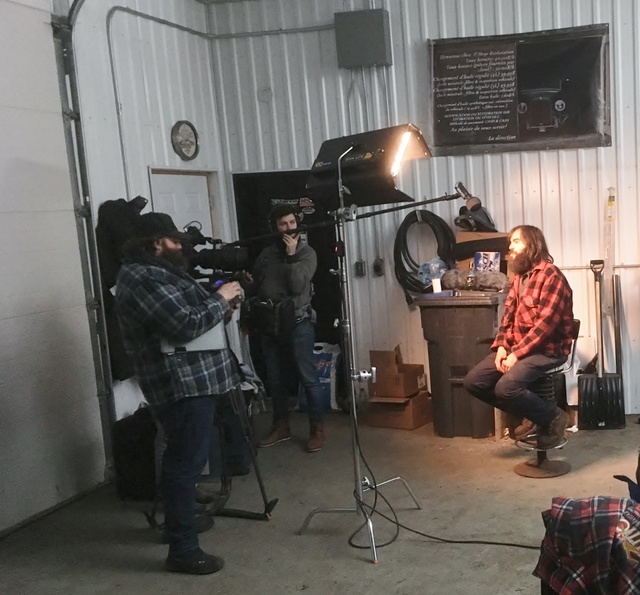 Montreal, Canada(September 25, 2017) — What do you get when you put a bunch of French-Canadian mechanics in a garage with a rusty late-seventies Chevrolet sedan and a Honda motorbike? The answer is “Gars de Chars” (“Car Guys”), a new web series from Mad Paris, a car fanatic, producer, director, videographer and long-time location sound mixer who used his Lectrosonics Digital Hybrid Wireless®kit, including LT Transmitters and SRc Receivers, to capture the craziness.

In “L’intégral,” the pilot episode of “Gars de Chars,” Mad Paris and his three accomplices — Andy, “P-O” (Pierre-Olivier) and his brother, Alex — have a budget of $2,000 and just 48 hours to create something special. They buy a beat-up 1977 Chevelle Malibu Classic for $600 and a 1988 Honda Shadow for $250, rip the engine, transmission and rear axle out of the car and build a custom tricycle powered by a small-block Chevy V8 engine.

“It’s a bit redneck, but it was fun to do,” laughs Mad Paris, otherwise known as Alain Parisien, who owns and operates 12 Gauge Production. He juggles multiple careers, getting involved in hair-raising adventures with vehicles while at the same time working as a location sound mixer for award-winning Canadian reality shows and documentaries. He also contributes to “Rat Rod” magazine.

“I’ve been doing location sound for 20 years or more, and I’ve been on the TV side for maybe another 10 years,” he says. “I have my own kit, so we used my sound equipment for ‘Gars de Chars,’ with the help of one of my friends.”

“We’re mechanics, not actors. It’s real stuff, and for this type of show you need tough equipment,” he continues. “All four guys were miked with the Lectrosonics LT transmitters. For the receivers, we used the Lectrosonics SRc. And we used Sanken COS11 lav mics. I love those, they’re big and tough and they sound good, too.” Sound was recorded to a Sound Devices 688 with an SL-6 SuperSlot interfacing with the Lectrosonics receivers.

When he first began working in location sound, Mad Paris used another brand of wireless equipment. “But the gigs were getting bigger and bigger and I needed more range and more clarity. So I decided to go with Lectrosonics,” he says. “What I love about Lectro is the reliability and versatility. You can go from 50 to 100 milliwatts, or 250mW with the SMQV. That’s why I have LTs and SMQVs in my arsenal.”

Not that “Gars de Chars” needed a lot of range, he says. “Everybody was in the garage so 50 milliwatts on the LT was perfect. I’m a sound guy, so I wanted to make sure, for this type of project, that the sound and the image were perfect. Even though the project looked a bit sketchy we had good quality sound and image.” If the reaction to the pilot on the web is favorable, he says, the series could be picked up for TV broadcast.

Mad Paris is currently providing location sound for “L’amour est dans le pré,” a French-Canadian version of the award-winning TV reality show originally developed by British production company Fremantle Media. “Besides that, I do all types of gigs,” he says. “I’ve been doing a documentary on the café racer motorbike, in Quebec. I did a food show in Toronto. And I do a French version of ‘The Voice.’”

Mad Paris and 12 Gauge Production’s credits also include “Scrap Metal,” an earlier series of car customization videos. “Ride Society,” a 2011 series, featured him participating in stock car races and races between school buses. He has also produced a host of music videos.

Well respected within the film, broadcast, and theatre technical communities since 1971, Lectrosonics wireless microphone systems and audio processing products are used daily in mission-critical applications by audio engineers familiar with the company’s dedication to quality, customer service, and innovation. Lectrosonics is a US manufacturer based in Rio Rancho, New Mexico. Visit the company online at www.lectrosonics.com.