AGITO is the world’s first modular remote dolly and features multiple configurations, allowing smooth motion from slow, precise dolly movement to high-speed tracked operation, all within one highly portable solution. With a very simple and fast change of its drive ends, the AGITO can be configured for free-roaming operation in Sports mode, or precision movement on rails in Trax mode. 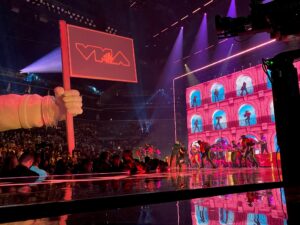 “We started talking to MTV in May about this show and by July, discussions turned serious,” said John Pry, Owner/President of JitaCam. “The plan from the beginning was to use four-track systems. It was our idea to make it four Agito Trax systems.”

Pry and JitaCam have a more than a 20-year working relationship with different production people at MTV Entertainment and Viacom, including the main stage director of this year’s VMAs, Joe DeMaio. 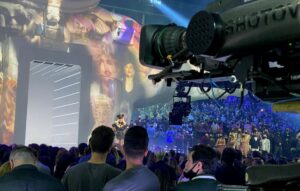 “This year’s VMAs didn’t have a single camera on a pedestal head,” remarks Pry. “It was just impossible to do that. You had the audience on the floor, a center stage main entrance, performance stages both house right and house left. Traditional camera stacks would have to be pointing dead center on each area and would block the views of everyone in the audience. It was all AGITOs, handhelds, and Stedicams.”

While four AGITO Trax systems were used, two of them were equipped with two cameras each, giving DeMaio six AGITO-mounted cameras to pick shots from. Each AGITO was on tracks under the stage, with the towers and Shotover G1 gryo-stabilized gimbal-mounted cameras protruding out. 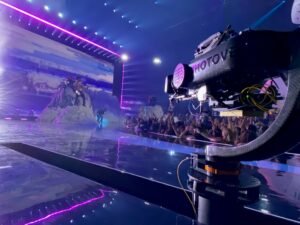 “The two ‘double cam’ AGITOs were about 20-30 feet from each performance stage,” said Pry. “Each had a lower camera for wide shots, and the higher tower camera for tight shots…although sometimes they did switch roles.”

Pry and his crew started setting up the Saturday a week before the VMAs, with everyone taking off the following Monday for Labor Day. On Tuesday, they would start teaching the camera operators how to use the AGITO.

“We had one of our guys manning one of the AGITOs, but MTV wanted to use their regular camera operators for the rest,” said Pry. “Now, these guys are amazing camera operators when it comes to handheld or cameras on heads, but they had little to no robotics experience. It wasn’t a hard learning curve, but we gave them a crash course in the AGITO and would give them different operating options until they were comfortable with what worked for each of them. Rehearsals started Wednesday, and come show night, they all had the operation of the AGITO down solid.” 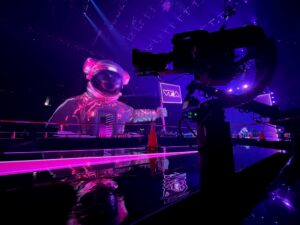 While some productions will use an AGITO operator and a separate camera operator, Pry believes that having one person operate everything is the way to go. “It’s really better for the camera guy to have full control. On the double cams, the higher tight lens operator used the foot pedals for the tower to get the perfect shot composition, while the wide shot operator could just flow with it more.”

According to Pry, one primary goal for the shots from the AGITOs was to not stand out – for them not to say “hey, look at me…I’m a really cool robotic camera.” To the audience at home, they would look just like cameras on heads with movement.

“What made me very happy,” remembers Pry, “was when we were all done and Joe [director Joe DeMaio] said that this was the first show he had ever done – and he’s done a lot of award shows – without a single camera on a head…and he was happy about that. We received a lot of extremely positive feedback from everyone. And at the end of the day, that’s what you want.” 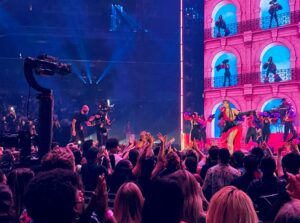