In addition to showcasing its artificial intelligence and automated graphics capabilities, multiCAM Systems will demonstrate how tightening the Visual Radio and social media connection can engage and build online audiences 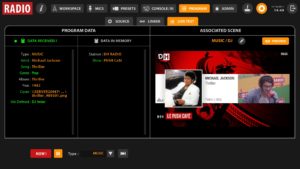 At NAB, multiCAM Systems will demonstrate new features to simplify social media moderation. Instead of a continuous feed of all posts, operators now have full power of what tweets and Facebook comments to show. Operators can immediately filter and move approved content into the display queue, and quickly overlay graphic scenes to further enhance the mood.

Stan Walbert, CEO of multiCAM Systems, points to better social media integration as an important pain point to solve in quickly evolving Visual Radio landscape – from both an operational and experiential perspective.

“Visual Radio is all about engaging the audience is a broader way,” said Walbert. “Terrestrial radio remains a strong medium worldwide, and as broadcasters build onto their traditional audiences with strong online and mobile programming, social media is without a doubt a significant part of the visual element. Our new toolset makes it easier for broadcasters to moderate and deliver an engaging social media platform, while audience interaction is amplified through the ability to share video content and provide input across the social network. This is all important to spreading interesting and engaging information, and reaching a larger audience.”

At the RCS booth, multiCAM Systems will focus on the graphics automation power of its Visual Radio solution. This includes the easy and visual setup process of scenes that correspond with information received from the radio broadcast, including tracks, jingles, RSS feeds and social media content. MULTICAM RADIO’s rich metadata management capabilities populate all dynamic visuals and text playing out of the automation system.

“Our solution decrypts every piece of metadata, with automatic and direct matching to each specific field,” said Walbert. “This means that the broadcast is populated with all relevant information associated with artist and song data, album cover and musical genre among other information. It’s a highly important element of the Visual Radio experience, and one that can turn off audiences if not properly addressed.”

multiCAM System will also demonstrate its live and on-demand streaming capabilities. This includes how its Visual Radio content can be recorded for later podcasting initiatives, and be automated within the broadcaster’s overall production workflow.