As an independent distribution company, Multicom Entertainment Group owns more than 1,500 titles, with more than 200 of them on film. According to Executive Director Andrew Baritz, “When looking at our entire workflow it became obvious that building our own post workflow would be more time and cost effective than partnering with an outside post house to do it for us. The costs and wait times of using outside labs for HD and UHD film scans were too high, especially with a library of our size.”

Since purchasing the Cintel Scanner in mid 2017, Multicom Entertainment Group has completed more than 20 film restorations, including Academy Award winning documentary “The Long Way Home,” horror film “Slaughterhouse Rock,” the classic tale “The Adventures of Pinocchio” and romantic biopic “The Whole Wide World,” which is slated for BluRay release in September 2018. 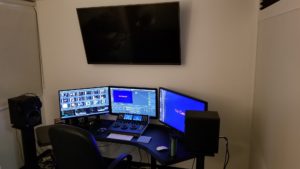 “We’ve already restored around two dozen films using the Cintel Scanner and currently have another five in progress. With most films using five reels, and occasionally capturing release prints along with original negatives (ON) for color reference, somewhere between 100 to 200 reels have already been captured, creating close to 100TB of RAW scanned data,” said Baritz.

Multicom Entertainment Group scans 35mm and 16mm film using a Cintel Scanner with a Cintel Audio and KeyKode Reader, and then does its restoration work using DaVinci Resolve Studio and a DaVinci Resolve Mini Panel. Additionally, the team uses an UltraStudio 4K, Teranex 2D Processor and multiple DeckLink capture cards as part of its workflow.

“Once assets are scanned and move to our edit bay, we use DaVinci Resolve Studio for all color correction, grain removal, audio extraction and stabilization,” said Baritz.

Lead Editor Meni Philip described working with DaVinci Resolve Studio as exercising muscle memory, since he first worked with it more than 10 years ago in Berlin. Philip cited using multiple facets of both DaVinci Resolve Studio and the DaVinci Resolve Mini Panel, including how the knobs on the control panel, specifically RGB, keyboard and color wheels, have helped improve his workflow. “I rarely use the mouse as the panel makes post faster and more precise,” he said.

According to Philip, the system gives him the opportunity to go beyond correcting color and grain, since DaVinci Resolve Studio divides colors into RGB and Luminance separately with full individual control of each, which provides much more control in the overall restoration of a film’s color. Philip employed this exact technique to overcome grading issues in his recent restoration of the 1982 film, “The Retrievers.”

“Even if you have a very faded film, you can still achieve very high quality results with DaVinci Resolve Studio, tackling challenging footage with ease,” he noted. “We also work with the Cintel Scanner to create the stabilization and master files from the scans. The quality is great, especially with the cost of the machine, and the ability to scan in real time allows for fast replacements of scanned assets, creating fast and efficient scans.”

“We have scanned film stock ranging all the way from 35mm ON, interpositives (IP), internegatives (IN) and release prints to 16mm ON, IP, IN and even A, B prints. Our films live in all formats from all years of production,” concluded Baritz. “Having the flexibility to capture most professional film in house has allowed us to bring back films from the past that could not afford to shoot on 35mm.”

Multicom Entertainment Group is an independent distribution company focusing on the worldwide television, digital media, publishing, licensing and merchandising marketplaces. With countless episodes of acclaimed classic television series, hundreds of movies and new theatrical films, Multicom’s expansive catalog boasts a powerful portfolio of global superstars in every format and genre. Multicom has established itself as an industry leader, cultivating strong relationships with partners worldwide, delivering broadcast quality content wherever, whenever and however it is consumed. For more information, you can visit www.Multicom.tv, for blog updates, www.Multicom.tv/blogs, and to learn more about the library, www.Multicom.tv/Library/