The Smart Deployment System (SDS) is the evolution of Cartoni’s best-selling two-stage Smart Stop tripod. It features the newly-developed Smart Lock mid-level spreader with a patented “no-bind” mechanism that offers one-touch, fast spread and collapse capability. This revolution in spreader design combines with the Smart-Stop patented positive-clamping mechanism—which adjusts a double-stage leg with a single trigger lever—for a system with unparalleled speed and ease of use. 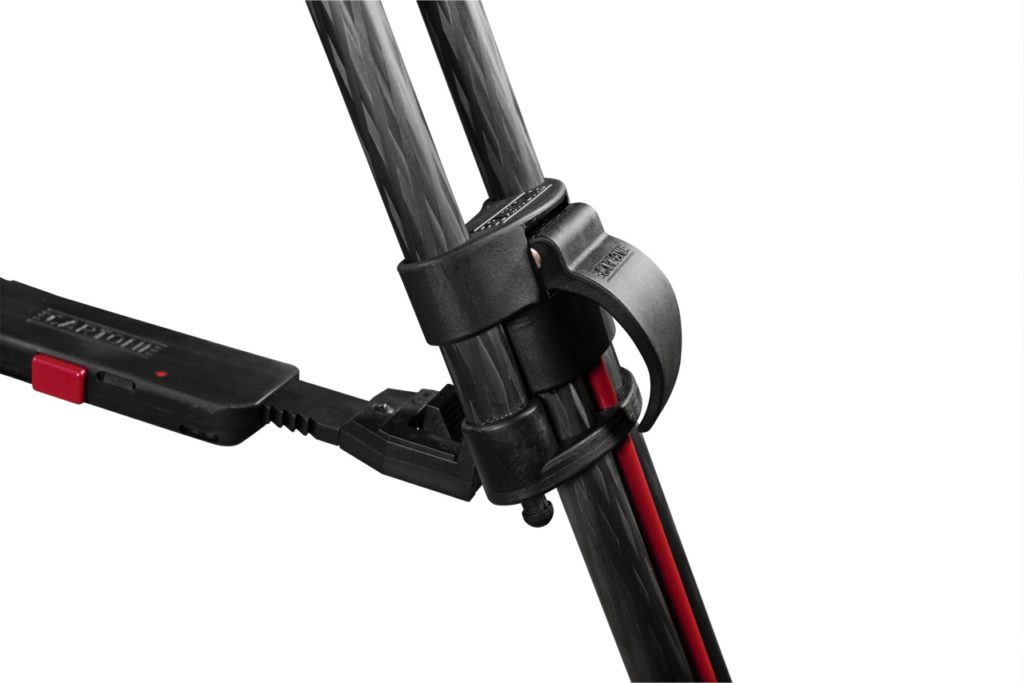 The SDS tripod has a 100mm bowl base in aluminum or carbon fiber tubing, and is paired with Cartoni’s Focus series of compact fluid heads. The SDS tripod and Smart Lock spreader will be sold separately and offered as system packages with the Focus 12, 18, and 22.

“SDS is the most intelligent and fastest deployed 100mm tripod in the industry,” said CARTONI President and CEO Elisabetta Cartoni. “We conceived the Smart Lock from customer feedback on the Smart Stop, and it has exceeded our expectations. No more pinched fingers, it’s perfect for working quickly in unfamiliar locations and uneven ground.”

Cartoni’s Smart Stop tripod has long been a favorite of ENG cameramen and documentary filmmakers for its flexibility, ruggedness and low cost. “I love the Smart Stop tripod,” says Emmy Award-winning producer and cinematographer Steve Gibby. “It’s very quick to adjust, making it ideal for fast-paced, run and gun work. We are excited about the addition of the new Smart Lock spreader, as the great majority of the work for my crews is fast-paced and outdoors. We exclusively rely on mid-level spreaders, and shaving those seconds spent loosening and tightening multiple thumb screws will be a real time saver.”

The SDS Tripod and other CARTONI products can be seen at the Manios Digital/Cartoni USA booth, Central Hall, C9521. NAB SHOW 2017 is April 24-27 at the Las Vegas Convention Center.

The Smart Deployment System (SDS) Tripod is just one of several new products Cartoni will be introducing at NAB. Others include:

Cartoni has a long and rich history of developing innovative camera support systems. Its legacy of high quality Italian design and manufacturing has resulted in numerous patents and awards, and helped shape the modern broadcast and cinematography industries. This dedication to quality and performance continues today in their Focus, Master, Maxima and Lambda systems.

Reflecting the state of the art in camera support technology, CARTONI offers the widest product range in the industry. 80 years of know-how and experience, innovative solutions, patented technologies and the constant care of serving the professional in any shooting situation with any camera, make CARTONI synonymous with excellence in camera support. CARTONI currently exports from Rome, its Italian headquarters, to 65 countries in five continents, with a network of agents and distributors serving all major international users. CARTONI’s mission is to guarantee the cameraman the highest possible reliability, freedom and creativity in any environment.

A division of Ste-Man, Inc. and led by President Steven Manios, Jr., Manios Digital & Film has been bringing the world’s highest quality products to professional filmmakers, videographers and ENG crews in the United States since 1992. The company has longstanding relationships with leading manufacturers around the globe and an extensive dealer network spanning the United States. It is an authorized distributor for Cartoni, Vocas and Kinotehnik. By working closely with its customers, and by listening to and understanding their needs, Manios Digital & Film has become a trusted partner to film and video professionals worldwide.