“Disruptive innovations create jobs,” says Clayton M. Christensen, the Kim B. Clark Professor of Business Administration at the Harvard Business School. “Efficiency innovations destroy them.” He is also founder of his namesake The Clayton Christensen Institute – a nonprofit, nonpartisan think tank dedicated to improving the world through disruptive innovation.  You can find out more about this by going to: www.christenseninstitute.org/

If you haven’t heard the term “Disruptive Innovation,” you haven’t been paying enough attention to the social media networks.  Disruptive innovation is the term used to describe the occurrence of a private, venture-backed company disrupting an industry populated by older, larger corporations or traditional industries. These disruptors pose the biggest threat to the public giants, because they change everything we think we know about the markets – literally, disrupting them.  They do business differently, seek their markets outside the box, and are cutting corners in their climb to the top in ways that just mystify not only people like you and I, but the corporate heads who have been trained to follow time-honored methods of achievement.

While all industries are dealing with some form of disruption, media companies are being hit the hardest.  Content and technology companies are experiencing disruption in media and entertainment, due to recent advances in technological innovation that have created new market opportunities.  Earlier market, technology or business models, while tried and true, is proving less and less reliable in this modern era. In order to survive today and capture any of the new opportunities that are created almost on a daily basis, a disruptive innovation must be identified and a plan to either evolve or adapt must be made

before any harm to the business occurs.

“Disruptive innovation is really the “new normal” of technology,” says former “Days of Our Lives” co-producer Noel Maxam, during an interview with Noel Black of “The Big Something” on “Disruptive Media” and the future of content.

When you consider that disruption has been around literally forever, it’s not that difficult to understand how one innovation can create a new marketplace and new jobs, while displacing an older way of doing things.  One of the best examples I can think of (at this moment) is AM radio.  AM radio was fantastic for what it was – a communications medium that could dispense news and entertainment – nearly at the moment it happens – to people miles away from the source.  AM was disrupted by a combination of FM radio and television (and THAT, in itself, is another story entirely).  Television was disrupted by cable, then satellite, and now the internet and mobile networks.

“In 2009, the FCC basically turned [content] into data as opposed to an analog-RF technology,” explains Maxam.  “As soon as they did that, as long as the memory was big enough, now you could trade that data over the internet; which, then, disrupted the way to make television, because now everyone has a distribution channel.  And so, what’s happening is that they’ve taken something where the cost-entry point was way too high for the average pro-sumer, and they’ve made it available to them, again.  So, in essence, we’re at the beginning or a brand-new opportunity for everybody to create their own content; now, it’s about finding the good content, and how to source that content, and then monetize that content.”

Movies and movie theaters haven’t fared too well in this, either!  Television was the theater’s first disruption; the movie (or “content”) itself was not disrupted, because television provided another avenue for delivery.  After broadcast television, movies were delivered via cable and satellite, and now the internet and mobile networks.  But, suffice it to say, any industry that involves content and delivery are being disrupted by innovations that suddenly appear.  Whether or not they are well-received by the public makes or breaks these new technological advances. 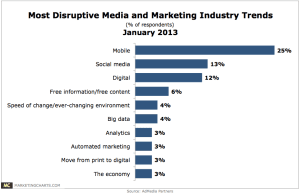 In January, 2013, a survey of domestic and international media and marketing executives (about half claiming they were in the services/marketing or media technology business) has found that 25% see mobile as the most disruptive force in their industry.  However, while mobile outpaced other hot trends such as social media (13%), digital (12%), free information/free content (6%), and big data (4%) according to the AdMedia Partners study, the firm acknowledges that the results could be skewed.  Although they surveyed 7,400 respondents in advertising, marketing services, digital marketing, marketing technology, media technology, media or digital media, only 16% identified themselves as being in the content business.

NAB Show 2014 is taking disruptive media seriously, as well.  According to NAB Show website, “The Disruptive Media Conference gathers broader-casters® who oversee the digital and interactive divisions within their companies to explore developments in online video, mobile and branded entertainment.”  On Wednesday, April 9, 2014, Founding Editor of The Huffington Post, and President and co-creator of HuffPost Live, Roy Sekoff will lead the way as keynote speaker for the disruptive media conference series.

All in all, one has to be on the look-out for disruptive media as it clandestinely works its way into an industry.  No industry is safe – no matter what industry you’re in, someone will come along with a new idea or improvement that can take away your marketshare.  Be careful and vigilant of these hidden disruptions before they sneak-up on you and take you by surprise.