Well, here we are, approaching NAB Show! Even with all the excitement that the Show brings, ever wonder what “NAB” is or who the “National Association of Broadcasters” are? Besides being the hosts of the greatest studio industry convention on this Earth, NAB is a large and complicated body, comprised of broadcast organizations, encompassing both television and radio, and now internet and every other form of media transmission, as well as all the other industries that support them.

NAB is multi-faceted these days, with arms extending from education, research and technological innovation (NAB Labs) to advocacy (or legislative and regulatory affairs), from Standards Setting (and the Television Code aka “The Seal of Good Practice”) to The Emergency Broadcast System (EBS), from online events to workshops and conferences and everything in-between. Just entering their website overwhelms you with just how much they are connected and how much they have going on.

WOW!  I know, right?  You are in as much awe as I am, whenever I contemplate the far reach of NAB.  But how did it all begin?  What are the humble beginnings of NAB and how did they get to where they are today?  Read on, and I hope to answer those and other questions you may have about this organization so integral to the broadcast and studio industry. 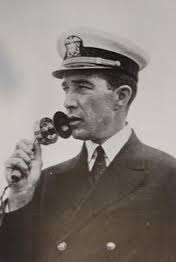 The government was not having any of this “self-regulation” and so it got into the act itself.  The Communications Act of 1934 became the first comprehensive legislation to regulate communication (both wire and wireless).  Broadcasting was considered interstate commerce, for which Congress had the authority to control under the U.S. Constitution (Article I, Section 8), and broadcast messages were granted First Amendment protection.  Broadcasting was recognized as a unique form of communication that would require a different regulatory framework than that of common carriers such as telephony and telegraphy.  All of this was then packaged with the philosophy that the broadcast media should serve the public interest, convenience, and necessity.  The 1934 act created the FCC, which was charged with ensuring that broadcasters acted in the public interest, convenience, and necessity. 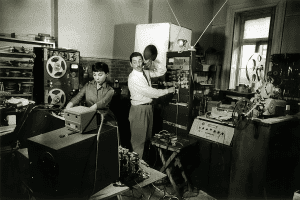 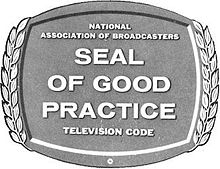 After its formation, the National Association of Broadcasters introduced a Radio Code in 1929 and subsequently, as technology demanded, a Television Code in 1952 (in his book, Leo Bogart observed that Television broadcasting developed swiftly under the aegis of the major radio networks who invested millions of dollars in … [the] enterprise (Bogart, The Age of Television, p. 9, 1956)).

However, both codes were discontinued in 1982 following an antitrust suit initiated by the Department of Justice that was designed to address advertising rate setting, determining a violation of the Sherman Antitrust Act (15 U.S.C. § 1 (1976)).  Broadcasting companies were neither forced to belong to NAB nor follow the codes it established, despite these being recognized as “standards of good practice” by the FCC, which also did not establish public rules in areas covered by the codes.

NAB “goes to bat” for the public, literally trying to maintain broadcasting standards and keeping everything in

broadcasting on an even keel.  Over the years, NAB has been involved in numerous lawsuits, usually appearing as amicus curiae, or “a friend of the court” as having a strong interest in or views on the subject matter of an action, but not an official party to the action.  Their views have helped shape the legal landscape in regards to the entire industry (which encompasses broadcast, post-production multimedia and telecommunications hardware, software, and services).

Aside from lobbying and bringing legal actions, NAB provides its members with other benefits, including a research library containing over ten thousand volumes, a staff that includes experts in science and technology and research and planning, and a monthly newsletter to its members (NAB World), as well as the weekly publications RadioWeek and TV Today. 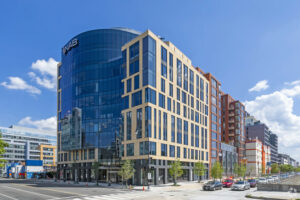 In addition, NAB started NAB Education Foundation, so that it could educate citizens in the United States about the principles of free speech and other topics concerning the industry. The foundation conducts research and education activities on issues such as first amendment rights relating to program content, editorial opinions, and commercial speech.  And let us not forget the aforementioned yearly conventions, which draw over 100,000 professionals and are the leading source of information, networking and technological showcases in the United States!

You’ll find the main headquarters of NAB (where else?) in Washington D.C., where it continues its ever-vigilant watch over the airwaves and leads the march for fairness within the broadcasting industry.  As of December 31st, 2021, Gordon H. Smith, former United States Senator from Oregon, retired as President and CEO of NAB. Curtis LeGyt, who has been with NAB since 2011 and was COO of NAB, stepped into the role as president and CEO of NAB as of 2022.

Find out more about NAB by visiting its website: www.nab.org.