NBC Olympics, a division of the NBC Sports Group, has selected NEP Group to provide mobile broadcasting, engineering consultation and technical support for its production of the XXIII Olympic Winter Games, which take place in PyeongChang, South Korea, from February 9 – February 25. The announcement was made today by Christopher Adams, VP of Venue Engineering, NBC Olympics, and Glen Levine, President, NEP U.S.

NEP will provide outside broadcast units NCP8 A and B, Iridium, and Zinc, as well as associated gear and technical support, for live coverage of the Opening ceremony at PyeongChang Olympic Stadium, figure skating and short track speed skating events at Gangneung Ice Arena, and Ice Hockey games at Gangneung Hockey Centre.

“I can’t believe that it’s been 30 years since we started our relationship with NEP, for our production of the Olympics,” said Adams. “Time flies when you have a valued facilities provider with an experienced team of professionals that have helped us produce the past 12 Olympic Games. We look forward to working with them on this next edition of the Olympics.”

“NBC and NEP started our Olympic journey together nearly 30 years ago, at the 1988 Seoul Olympics,” said Levine. “I’m happy to say that for NBC’s coverage of every Olympic Games since that time, NEP’s support team of managers and engineering specialists has been an integral part of this successful, longstanding partnership. We’re extremely proud of our relationship with NBC Olympics and thrilled to return to South Korea for the production of the 2018 Olympic Winter Games, through our OB units, flypacks and creative technical solutions.” 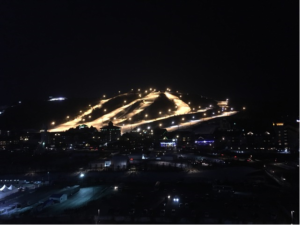 NEP and its Bexel division, which has provided broadcast gear for every Olympics since the Atlanta Games in 1996, will send an experienced, combined team of more than 30 specialists to support NBC’s production of the PyeongChang Games. The NEP team will include 15 broadcast engineers and technical support staff, plus 17 team members to provide long-term planning, operations management and technical consultation at NBC Olympics’ production facility inside the International Broadcast Center in South Korea.