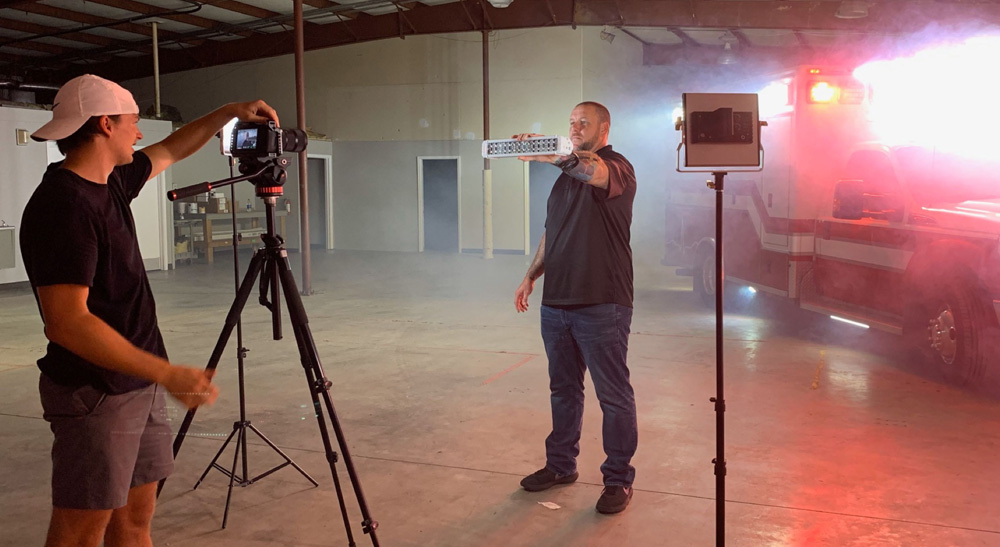 Massa explained, “Due to the nature of our products, we’re constantly shooting near very bright flashing LED lights in dark environments, so the new Studios Cameras’ dynamic range and color science are crucial for our extreme lighting conditions. Also, since we need to show off our lights and their visibility during the day and at night, having the Studio Cameras’ exceptional low light performance is a must for us.”

Massa recently started building out his production studio where he and his team will create original content, including podcasts, panel interviews, how to videos and more, for their social media and YouTube channel, HiVizLEDS. With plans to shoot both in studio and on location, Massa selected a Blackmagic Studio Camera 4K Pro for its professional XLR audio and 12G-SDI, which will come in handy for outside live events where there’s a significant distance between the camera and the ATEM Mini Extreme ISO, as well as two Blackmagic Studio Cameras 4K Plus.

Massa noted that the cameras’ lightweight design and portability are essential, as they allow the team to easily change locations. However, the Blackmagic Studio Cameras’ large HDR display with side handles are what drew Massa to the cameras. “I don’t know if it’s the firefighter in me, but I love being hands on with the gear, grabbing the camera and quickly tracking shots while in the thick of the action,” he said. “The combination of the cameras’ compact design with the handles was a no brainer.”

“Along with quality, our workflow is built around speed, as we’re aiming to publish at least one video per week, as well as hosting twice daily video conferences with our customers,” Massa added. “The ATEM Mini Extreme ISO’s ability to create DaVinci Resolve project files is key to turning around content quickly. We’re able to record feeds from multiple cameras and get most of our edits done live, quickly adjusting any edits in post as needed.”

Massa decided to build the new studio around a Blackmagic Design workflow after he used a Blackmagic Pocket Cinema Camera 4K digital film camera to shoot trainings and video conferences as a way to connect with his customers in lieu of in person tradeshows in 2020. He immediately recognized the impact video content could have for his business long term.

“Since we work with first responders, our customers have a lot of down time in the fire stations to absorb content. We found that we could engage with our existing audience and reach new customers through innovative video content. Investing in more Blackmagic Design equipment has allowed us to increase the quality of our productions.

“We’re a small business, competing in a market where there’s larger, more established competitors,” Massa concluded. “With our Blackmagic Design gear, we’re differentiating and positioning ourselves as a leader in the space by reaching our customers and prospects with more professional content.”