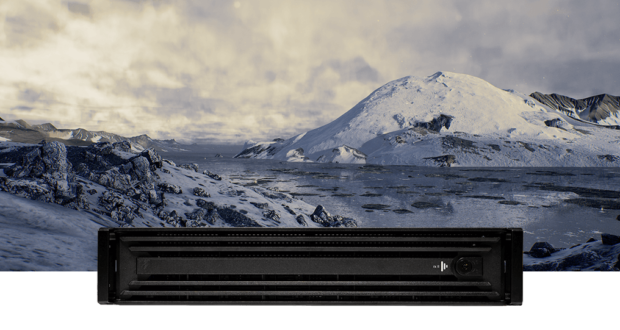 In its mission to revolutionise real-time content rendering, disguise has unveiled its new rx II hardware release, with the fastest and most powerful professional GPU available on the market. The new rendering node unlocks 40% more graphics processing power than its rx predecessor to reliably render larger and higher quality scenes in real-time engines such as Unreal Engine, on any display canvas and across any industry application.

When working on any type of creative project, whether it be fixed installations, virtual production, broadcast or even live shows, the disguise workflow enables users to update their content in real-time, delivering astonishingly detailed scenes on the fly whilst also saving time and money on post-production.

Although GPUs are getting dramatically more powerful, the processing power needed to drive the most detailed images means it can still be a struggle to keep frame rates high. The new rx II enhances disguise’s existing cluster rendering solution, which has been engineered to split the processing power of highly detailed or large scale real-time scenes across multiple rx render nodes.

By splitting up content processing power, each individual machine is only given what its GPU can control. Each render node operates as part of a bigger cluster, allowing for a unified image that is, in reality, the product of multiple machines. The rx II is disguise’s new and improved dedicated rendering node, enabling users to demand far higher quality from their content than previously possible.

“At disguise, we want to stay at the cutting edge of graphics processing – our customers constantly require more performance with engines like Unreal to achieve even more life-like results,” says disguise CTO Ed Plowman. “With the rx II, we wanted to make scalable rendering available to productions of any size, and create a rendering node that perfectly complements the disguise ecosystem.”

The disguise rx II further enhances real-time rendering without compromise via 10-bit HDR processing for highest-quality output. Users can scale their production while using any render engine, create photorealistic backgrounds and assets and leave it to rx II to deliver pixel-perfect graphics to the screen with minimal latency.

Get the rx II by pre-order here.

disguise is the platform to imagine, create and deliver spectacular visual experiences. Its award-winning extended reality (xR) solution has powered over 230 immersive real-time productions in the past year, for music artists such as Katy Perry and Billie Eilish, enterprise businesses like SAP and Siemens, educational institutions like the University of Michigan, broadcast TV shows like MTV Video Music Awards and America’s Got Talent, commercial brands like Nike and Under Armour and on-set virtual productions in more than 35 countries.