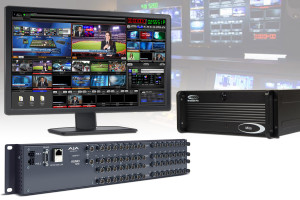 Router Control was developed at the request of Advanced Broadcast Solutions, a systems integration firm based in SeaTac, Wash. “We had a customer who needed more inputs but couldn’t afford to upgrade to a large production switcher, and they didn’t have the space for a larger Router 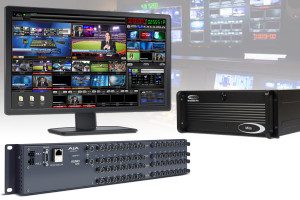 Controlcontrol panel,” explained Mark Siegel, president of ABS. “Broadcast Pix’s Router Control was the affordable and powerful solution we needed to increase their access to more sources from across their facility.”

Through a simple TCP/IP connection, Router Control makes it easy to integrate external sources into live productions. Router assignments are show-based, so a single router can feed different control rooms for easy configuration. Custom names on the KUMO router are automatically mapped to the Broadcast Pix Multi-View as an under monitor display (UMD) and on the panel through patented PixButtons.

Flint™, Granite™, Mica™, and Roadie™ systems can use the built-in Fluent-View customizable multi-view with a mouse or touchscreen, or use a control panel’s source/destination buttons, to control the KUMO router. Plus, with Fluent Macros, Broadcast Pix’s file-based macros system, multiple sources can be routed with one button. AJA router panels and Web-based control offers bi-directional control as well, so any change on the Broadcast Pix system is reflected on AJA router panels and Web-based control systems (and vice versa).

“With our new Router Control, you have access to your entire facility at your fingertips. You can use it to feed any or all of the inputs on your Broadcast Pix switcher,” said Steve Ellis, CEO of Broadcast Pix. “It’s a flexible and cost effective option for stadiums or production facilities that may have multiple sources feeding other house equipment.”

“Broadcast Pix has been a longtime partner of AJA’s who, over the years, has built inventive software solutions to work with our hardware products to solve complex workflow problems,” said Nick Rashby, president, AJA Video Systems. “Router Control together with KUMO is a simple and cost effective way to integrate external sources into live productions.”

While Router Control was initially designed to work with AJA routers, Broadcast Pix will work with other technology partners to expand its applicability. The Router Control software option is priced at $495 and will be available in late June.