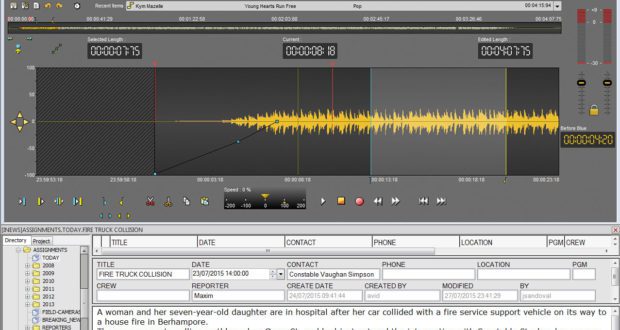 Though MediaWorks has spent the past two years considering the move of its TV and radio assets into a single ecosystem, the company needed only days after seeing the Media Assist suite at the BroadcastAsia2015 show to decide to bring NETIA experts and software to company headquarters for a proof-of-concept demonstration. Just three weeks later, NETIA held on-site workshop sessions at the Auckland facility and demonstrated the integration of NETIA Media Assist with Avid iNEWS(R).

“Media Assist will help Newshub and other MediaWorks news operations units to streamline their workflow and take full advantage of news assets across their broadcast operations,” said Alexandre Martinez, pre-sales engineer at NETIA. “Using NETIA software in conjunction with iNEWS, MediaWorks will be able to reduce its reliance on manual operations, boost content transfer between its radio and TV departments, and ultimately realize an optimal return on its assets.”

NETIA’s radio automation modules cover the digital audio workflow, supporting production and playout of radio news programming. The modular structure of NETIA software makes it easy to integrate into existing operations and facilitates ingest, editing, scheduling, broadcast, multicast, archiving, data security, and administration via a single user interface. The new solution at MediaWorks will allow journalists from central and regional sites in New Zealand to connect to servers within MediaWorks’ Auckland headquarters. Media ingested and edited locally by journalists at regional sites will be pushed to the NETIA server in Auckland.

MOS integration of NETIA and iNEWS will enable radio journalists to work on NETIA audio assets from within the iNEWS client workstation. Media Assist tools, including a browser, player, and NETIA’s Snippet editing tool, are accessible from within the iNEWS workstation session as ActiveX plug-ins. Any rundowns with audio assets created in iNEWS can be used to create audio playlists on Media Assist, which will manage playout.

More information about NETIA and its product portfolio is available at www.netia.com.

About NETIA
NETIA, a Globecast company and part of Orange, is a leading provider of software solutions that enable efficient management and delivery of audiovisual content to today’s full array of media platforms. Relied on by more than 20,000 users in 200 installations in more than 40 countries, NETIA solutions allow content producers and owners to manage content from ingest to delivery, targeting multiplatform outlets including the Internet, VOD, IPTV services, and mobile devices.