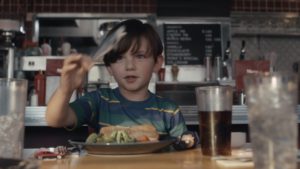 The Newport Beach Film Festival (NBFF), in partnership with Garage Team Mazda and REVERSE, recently announced the release of its official 2019 marquee trailer Play: The Power of Ideas. The promotional film features a young boy who is caught in the crossfire of his parents’ bitter divorce. In an effort to escape, he retreats into the comfort of his imagination. What he doesn’t realize is the power that his ideas have on the world.

The Newport Beach Film Festival has become one of the leading lifestyle film festivals in the U.S., bringing Orange County the best of contemporary filmmaking from all around the world. “The Power of Ideas,” the theme of this year’s film festival, is about the creative power of ideas, and their potential to change the world.

“This year we celebrate our 20th anniversary, a real milestone for us,” said Todd Quartararo, Newport Beach Film Festival co-founder and director of marketing. “Since its inception, the festival has stood for quality – from the creativity in storytelling to the production value in every aspect. Garage Team Mazda and REVERSE have surpassed our expectations and we are proud of the creative work they’ve accomplished with the film.”

For the second consecutive year Garage Team Mazda, a WPP agency, was engaged to create a short film to promote the festival. Erich Funke, Garage Team Mazda chief creative officer said, “As a local agency, it’s great that Garage Team Mazda can support and promote an exciting event that’s part of our community, and that stands for everything we believe in as creative thinkers.”

The script, written by Garage Team Mazda creative director Melissa Webber and writer Daniel Bremmer, aims to follow the success the agency achieved with their acclaimed work on the 2018 promotional film “Quota,” named on Adweek’s Best 25 Ads of 2018.

“Our goal is always to make a promotional film as compelling as the films accepted into this intensely selective festival,” said Melissa Webber, Garage Team Mazda creative director.

“Play: The Power of Ideas” was executive produced by REVERSE founder Thibaut Estellon and directed by Johan Stahl, whose short films and documentaries have garnered Sundance and Robert Awards (the Danish Oscars). The production team also featured an all-star cast that included award-winning feature director of photography Shelly Johnson, ASC. The team approached the project with a lot of thought into finding the right balance juxtaposing traditional dramatic cinema techniques with elements of the gore genre.

“By grounding the story in an easily relatable reality — a classic divorce scenario with familiar tropes and gender roles — it sets the viewer up to quickly see the disparity between the parents’ world and the boy’s world, and ultimately, express central themes around imagination, cinematic storytelling, and the theme of this year’s Newport Beach Film Festival: ‘The Power of Ideas,’” said Johan Stahl, REVERSE director.

“This was a super fun, collaborative, dream project for me,” said Stahl. “Props to Thibaut and the team at REVERSE for leading an A-list crew to bring this bold and equally ambitious project to life.”

“Play: The Power of Ideas” will open the festival and screen before each of the 350 films on this year’s program. The festival runs April 25 through May 2.

About The Newport Beach Film Festival

Celebrated as one of the leading lifestyle film festivals in the United States, the Newport Beach Film Festival seeks to bring to Orange County the best of classic and contemporary filmmaking from around the world. Committed to enlightening the public with a first-class international film program, a forum for cultural understanding and enriching educational opportunities, NBFF focuses on showcasing a diverse collection of studio and independent films from around the globe.

Founded in 2010, GTM is formidable WPP integrated team agency founded in partnership with Mazda and located in Orange County, Calif. GTM has vast capabilities ranging from traditional agency services, PR, digital and social, Hispanic, motorsports, retail marketing, analytics, and data and oversees all advertising and marketing for the automotive brand.

REVERSE is a bicoastal commercial production company ready to put a stake in the uncharted. We represent an international roster of directors who bring a keen sense of what the future of production will look like — and are devoted to helping brands and agencies worldwide trail-blaze what content can be for tomorrow’s marketplace.

Casting: Face In The Crowd Casting