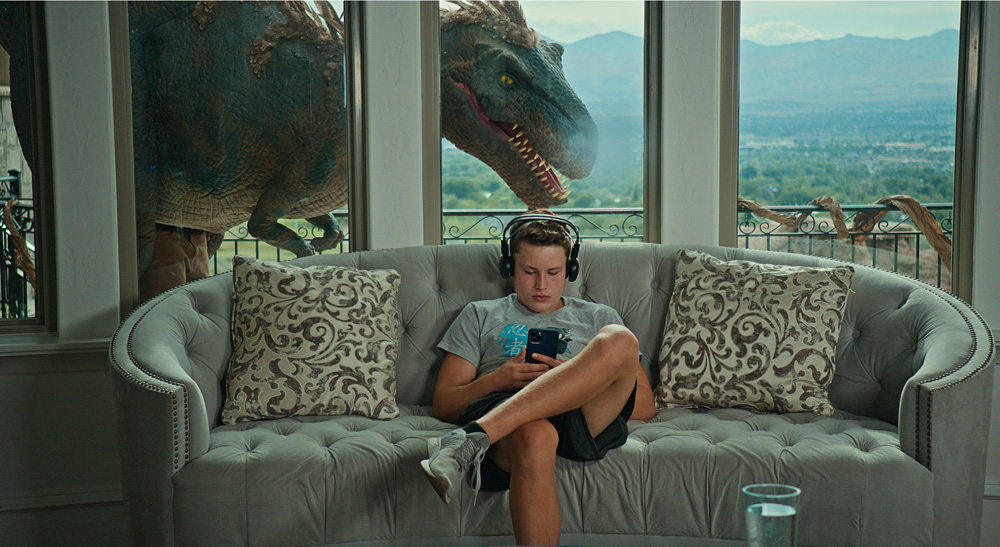 Ninja Kidz TV was created in 2017 to provide family friendly entertainment and to inspire people to seek adventure, learn new skills, develop confidence and to encourage a healthy lifestyle. The channel follows the adventures of martial arts trained siblings Bryton, Ashton, Paxton and Payton and with more than 15.5 million subscribers and almost seven billion views is one of the most popular YouTube channels in the world.

Dinosaur attacks and hijinks have been a recurring theme for Ninja Kidz, with most of these films shot using highly realistic and mobile practical dinosaurs sharing the screen with the Ninja Kidz, who take advantage of their various black belts and gymnastics training to perform all of their own stunt work. This new video included all of those, as well as a number of live and CG snakes and stop motion invading plants, as the Ninja Kidz are stuck in a video game and have to work to find parts to build a new dinosaur and end the game.

Matt Oliveira directed and produced the film alongside DP Alberto Nunes. Oliveira, who has worked on films, TV shows, commercials, MMA spots and a number of YouTube videos including child actors, previously worked with Blackmagic Design cameras and DaVinci Resolve on a number of projects, and knew the Pocket Cinema Camera 6K Pro would give him the flexibility and image quality he needed for this project.

Oliveira explained: “The Pocket 6K Pro was a perfect camera for this for many reasons. I absolutely love the colors and the dynamic range that these cameras are capable of reaching. And even though we had it rigged almost like a full cinema camera, the size and the light weight of the whole rig allowed us to move much faster with a small crew and know that we were capturing a cinematic picture.”

The project included shooting indoors in a kitchen, living room and hallway containing all of the siblings interacting with the dinosaurs and a live boa constrictor. Oliveira and Nunes had to develop a set of shots that could capture all of the action in a small space, but also provide a high dynamic range image to allow fake CG poisonous snakes to be added in post.

Oliveira said. “So we had practical dinosaurs that weigh anywhere between 35-50 pounds each and live animals. And we had the kids. Usually when you have kids and live animals on set, it becomes really challenging. But the kids did so well and it was so easy to work with them. The snakes not so much. I’m not a big fan of snakes.”

He continued: “In the kitchen scene for example, the idea was to duplicate something similar to Jurassic Park where the kids are hiding are behind the counters and the raptor is looking for them. I had that scene in my mind and I knew exactly what I needed to capture, and the size of the Pocket 6K Pro made it possible.”

Oliveira and Nunes shot the scene with the Pocket Cinema Camera 6K Pro and a wide angle 15mm lens, which allowed them to see the kids, the set and the Raptor approaching in the background.

Footage was sent to Josh Garretson for editing and color grading, with the color work completed using DaVinci Resolve Studio. Being able to bring the footage directly from the Pocket Cinema Camera 6K Pro to post saved Oliveira precious time and resources.

“I love how easy the post production is when working with Blackmagic cameras. No matter what I shoot in, it’s always a delightful process in post. The flexibility to push the image is incredible and the simplicity to color Pocket Cinema Camera 6k files is a lifesaver,” Oliveira said.

Ninja Kidz and the “Dinosaurs In Our Home” can be watched now at www.youtube.com/NinjaKidzTV.

Press Photography
Product photos of the Pocket Cinema Camera 6K Pro, DaVinci Resolve Studio, as well as all other Blackmagic Design products, are available at www.blackmagicdesign.com/media/images.