Non-Linear Editing and the Arrival of Avid

Even in the 1980s, both film and video editing was linear. Film editing involved manually cutting and pasting strips of film. Video editing was the same — edits had to be made in sequential order.

The first linear film editor was the Moviola, invented in 1924 by Iwan Surrier. It was used to edit and trim the unwanted scenes in movies. The machine is still in existence and is used in Hollywood for some film productions.

In non-linear editing, edits are specified and modified by specialized software. A pointer-based playlist, effectively an edit decision list (EDL) for video and audio, or a graph for still images, is used to keep track of edits.

Each time the edited audio, video or image is rendered, played back or accessed, it is reconstructed from the original source and the specified editing steps. Although this process is more computationally intensive than directly modifying the original content, changing the edits themselves can be almost instantaneous, and it prevents generation loss when the audio, video or film image is edited.

The move to non-linear editing was a long and rocky road. The first truly non-linear editor, the CMX 600, was introduced in 1971 by CMX Systems, a joint venture between CBS and Memorex.

It recorded and played back black-and-white analog video recorded in “skip-field” mode, a process in which only one field — half of a frame — of video is recorded in order to conserve recording media space. The system used modified disk pack drives the size of washing machines. They were commonly used to store about half an hour of data digitally on mainframe computers of the time. A DEC PDP-11 computer served as a controller for the whole system. It was crude, to say the least.

In the early 1980s, Ediflex from Cinedco came along. It used a bank of Sony JVC VCRs for offline editing. At NAB Show, 1984, the EditDroid, which was developed by a spin-off company of Lucusfilm, was introduced. It was a joint venture of DroidWorks and Convergence Corporation. It used computers coordinating multiple LaserDiscs or banks of VCRs.

Also at that same NAB Show, the Montage Picture Processor was introduced. The Montage used 17 identical copies of a set of film rushes on modified consumer Betamax VCRs. A custom circuit board was added to each deck that enabled frame-accurate switching and playback using vertical interval timecode. Intelligent positioning and sequencing of the source decks provided a simulation of random-access playback of a lengthy edited sequence without any rerecording. The theory was that with so many copies of the rushes, there could always be one machine cued up to replay the next shot in real time.

All of these early efforts were compromised. Then, at NAB Show in 1987, Avid Technology, founded by inventor Bill Warner, showed the first protype of the Avid Media Composer in a hotel suite. It opened the door to genuine non-linear operations. Warner had been dissatisfied making home video since he was a kid with a portable camcorder. He wondered whether computers could be used to edit video images rather than standard video production equipment. Linear editing was too hard and cumbersome, and he started Avid with a single goal: to provide a new, faster way to make media productions.

As with many inventions, it took a convergence of technology to make Warner’s dream come true. One important key was the Apple Macintosh. By 1989, with the help of the Macintosh IIx CPU with 5MB of RAM, the Avid/1 Media Composer became a real product. The system had real-time video compression techniques to display edited sequences instantly, direct from digital disk.

The Avid/1 provided random access to digitized video and audio, offering from two to six hours of storage capacity. With its three processors working in parallel, the Avid/1 could simultaneously handle full-motion color video at 30 FPS and two channels of 44Khz, 16-bit sound. Editing had changed forever.

At that first NAB Show, Warner recalled the time. “I could taste it. I wanted that machine. I just had to have it. So we shipped the machines by FedEx to the NAB Show. Our machines were lost in shipping. Then they found them in good in time, but we were sweating bullets,” Warner recalled.

“Just to show you how much money meant to us at that time, we were thrilled because we got the shipping for free. And it was like $1,000 to send these big machines, but they had been lost for a few hours. We got our machines and we set it all up in the suite. We called people at their hotels to make sure they would come. And they did. We got our first $500,000 investment at that NAB Show.”

At the 1989 NAB Show, Avid began selling its system. At the end of that year, it sold its first handful of systems, mostly to editors making commercials in New York City, because the company wanted to cut its teeth outside of LA. The system was still immature, and the kinks needed to be worked out before tackling Hollywood, the big time in editing

The video quality of the Avid/1 (and later Media Composer systems from the late 1980s) was somewhat low (about VHS quality), due to the use of a very early version of the Motion JPEG (M-JPEG) codec. In 1991, when Avid implemented JPEG compression, picture quality improved dramatically, making the system a versatile solution for professional editing. 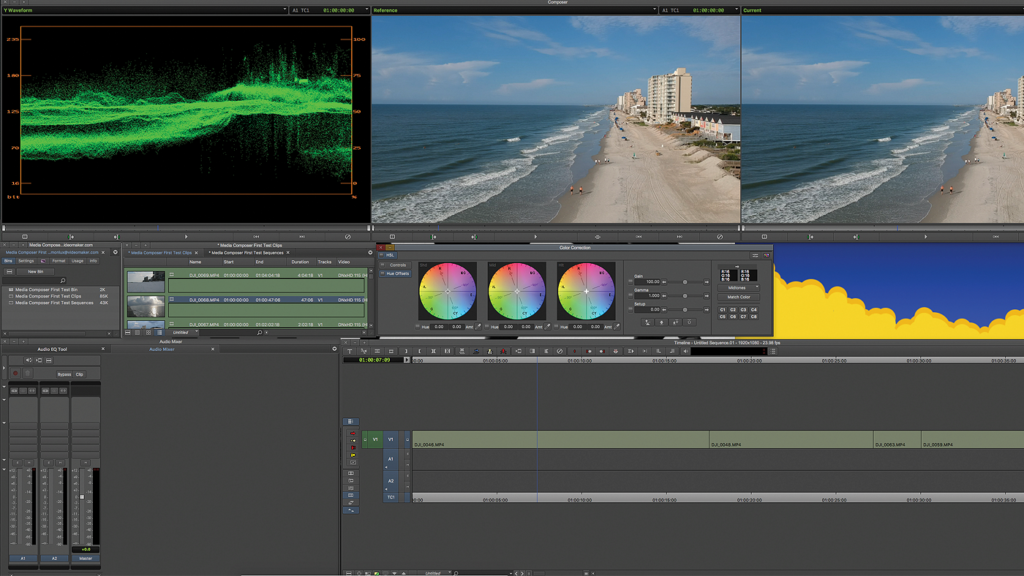 In 1992, Avid came to LA. In August of that year, Steve Cohen began editing Neil Simon’s Lost in Yonkers on Avid’s first Film Composer system. After an initial process shakedown, the Film Composer performed flawlessly. It was the only electronic editing system that operated as “virtual film” at a true 24 fps, with no locked out frames or fields, and no “cheat” edits.

With no cheats, Avid’s cut lists were 100 percent accurate, consistent and stable over editing changes. Over the years, many optical-heavy shows have appreciated this accuracy and stability, when every scene comes out to the frame, every time.

Avid took off like wildfire. Warner had invented a way to make instantaneous changes at anytime and anywhere in a video or film program. It set a new editing standard. By the year 2000, more than 100 television shows and movies such as Titanic and The Matrix were edited with Avid products.

By 2018, Avid’s editing products, including its premiere audio editing app, Pro Tools, were used in 70 percent of commercially published music, 90 percent of original content from the leading streaming providers and nine of ten leading international news networks. Avid has won a Grammy, 16 Emmys and two Oscars. The company went public in 1993.

Development of the Avid Media Composer over the years has been a series of significant challenges. The industry was surprised when the first product ran at 30 frames-per-second, showing editors every frame of their original material. The Avid pioneered the on-screen source and record monitor and an interactive timeline. Most importantly, the system was extremely fast, allowing editors to find their footage, make edits and see the results instantly.

In addition to his digital editing work, Warner has worked over the years on improving hand-pedaled cycles. He founded Wildfire Communications in 1992, based on his invention of a telephone-based, voice-activated virtual assistant. Wildfire was sold to France Telecom in 2000. Referring to himself as an “engineering entrepreneur,” Warner today is building a business around personalized maps. He received a Bachelor of Science degree in electrical engineering from the Massachusetts Institute of Technology.