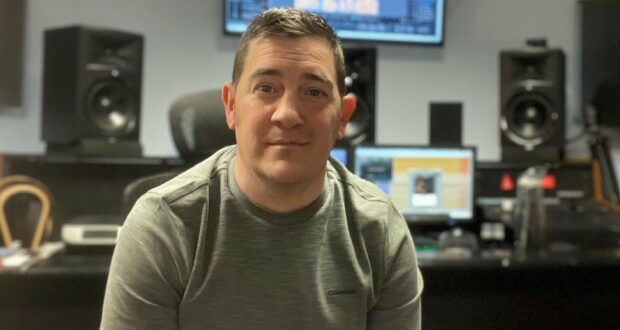 ENFIELD, CT, OCTOBER 27, 2021―While it begins as a “dull, dark and soundless day,” the famous Edgar Allen Poe short story, The Fall of the House of Usher, is anything but boring or quiet. In fact, the chilling tale of Roderick Usher, a man living alone, seemingly descending into madness, comes to life in the upcoming horror/thriller film 3 Days Rising. As the film’s gruesome story unravels, sound plays a pivotal role in telling the tale. But that was not without its challenges.

Portrayed by Actor Peter Greene, Roderick (Eric in the film), is soft-spoken and often mumbles to himself. There are also crucial moments in which haunting noises surround Eric as he descends further into his madness. Both factors presented a challenge to the film’s sound designer, Bob Pepek, owner of MelonCollie Productions. To properly capture all the terrorizing nuances of the story, Pepek turned to NUGEN Audio, most notably the ISL2 True Peak Meter and SEQ-S plug-ins, to ensure the audio supports the chilling vibe of the film.

Pepek, a singer-songwriter turned audio engineer, has been a fan of NUGEN Audio for years. He uses NUGEN for all his post-production audio needs. This includes everything from the animated children’s series Astro Blast and LEGO product animations (for which he has won two Telly Awards), to commercial work and feature films, like 3 Days Rising. He refers to NUGEN’s assortment of plug-ins as essential, and says they are always in his palette. “I consider myself the Bob Ross of audio engineering and NUGEN plug-ins are my ‘happy little trees,’ ” he says.

This was especially the case with the NUGEN SEQ-S and ISL2 plug-ins. Pepek says they were particularly helpful to ensuring Greene’s dialogue was seamless between the lavalier and boom recordings. The production crew often needed to switch between both microphone styles, depending on the shot, which can cause inconsistent audio capture at times.

“It becomes difficult in those situations, because sometimes the lavalier is the better microphone option in a scenario, such as a wide angle shot,” Pepek explains. “Not every lavalier mic has the same EQ pattern or timbre as a boom mic. NUGEN SEQ-S has been vital to matching the EQ from the lavalier and boom, making them as seamless as possible.”

“When you do a bulk load of commercials that will air in various cities and regions, you’re doing a lot of versioning,” he explains. “So, you don’t have time to really check in on your mix to ensure it is meeting broadcast loudness specs. It’s beautiful to have a ‘set it and forget it’ plug-in like the ISL2. I don’t have to second guess my mix. I know everything is going to come out clean and transparent. It’s a time saver.”

For Pepek, NUGEN’s plug-ins have always been rock solid, reliable tools for his various projects. And, he says, they’re not just a one-trick pony. “SEQ-S is not simply an EQ plug-in, it’s just chock full of other useful features. If it were any other brand, I’d have to go spend money on another six plug-ins to accomplish everything that SEQ-S gives me. For me, it’s the best bang for the buck.”

3 Days Rising was written by Derek Cukrowski and directed by Craig Cukrowski. The film also stars Mickey Rourke and Ice-T and does not yet have a release date.

MelonCollie Productions is an award-winning, boutique, full-service sound design and post-production studio, based in Enfield, CT. Founded by Bob Pepek in 2016, the studio creates and maintains relationships with filmmakers and digital media creators through design-focused audio post-production. Its world-class engineers deliver audio production, creative sound design and studio direction for TV, cinema and radio advertising; branded content for web and mobile; and short and feature-length films.