LOS ANGELES, OCTOBER 23, 2019 – It’s no secret that Academy Award-winning filmmaker Quentin Tarantino sets out to create one-of-a-kind masterpieces packed full of the industry’s most highly respected artists. What might be lesser known to the general viewer, however, is the full scope of the director’s attention to detail. One of the biggest components of his productions is the immersive nature of the audio that complements the visuals. Not least among these is his latest film, Once Upon a Time in Hollywood, for which Tarantino’s long-time re-recording mixer Michael Minkler, and veteran music editor Jim Schultz delivered an unrivalled audio production. As the film relied on well-known original radio broadcasts, songs and scores from the 1960s era in which it was set, the duo selected NUGEN Audio’s Halo Upmix plug-in to allow them to mix from stereo to 5.1/7.1/Dolby Atmos and back again. 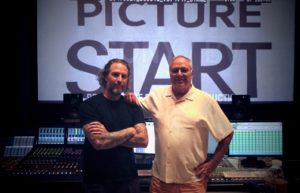 Taking into account Tarantino’s desire to bring audiences into the film, the pair chose to incorporate NUGEN’s Halo Upmix for its ability to preserve the natural sound of the audio source. “Quentin values the authenticity of his material, from the master recording through to the reproduction and re-recording, and how it’s used in the film,” explains Schultz. “One of the most important things I think we do with Quentin is to stay true to the original source as close as we can and work it into the film in a way that serves the narrative and serves the authenticity of the recording.”

For Tarantino, the immersive nature of the film’s audio starts with the dialogue. “Everything has to be real on the set; he never loops any production dialogue,” says Minkler. “Whether it’s music or dialogue, we must always work from the original source, that’s the one that’s gold and you can’t change it. For this film, he had to lighten up on that quite a bit because there was so much music involved – at last count, we used 107 drops of music. Jim spent a tremendous amount of time using the original source, but then Quentin gave us the flexibility to experiment with newer vinyl, digital and broadcast recordings, with the caveat that it had to be the exact pitch and time as his original to ensure there was no disjointed audio. So, Jim spent a huge amount of time doing that.”

Halo proved extremely helpful in creating an exact pitch to the originals. “Some of these sources were mono or two-track stereo; nothing was five-channel or higher,” continues Minkler. “We’re living in a 7.1 world now, so Once Upon a Time in Hollywood had to fill up the room, but only to the level that fits and sustains the flow of the film. Sometimes we stayed within three or five channels and other times we’d go up to seven channels or Atmos. In some cases, however we had to upmix to 7.1 from a mono source, which is a little trickier but with NUGEN’s Halo Upmix, we were able do it successfully.”

From their many years working with Tarantino, Minkler and Schultz know that you don’t have to make big sound just because you can, but rather that you should do it when it serves the film and the narrative. “Halo Upmix came into the picture successfully when we needed our audience to experience the film in a much more immersive way,” adds Schultz. “We were able to create an environment that speaks to the way the characters are experiencing the music from an internal narrative standpoint. In instances when music is playing in the background and a character gets into a car, the music might begin as the radio version once the car starts, but as the actors drive along, it may transition to a full dynamic surround upmix allowing the audience to experience the song on a more visceral, emotional level. This is something we didn’t want the audience to notice was happening. It had to be completely organic and transparent so that, all of a sudden, the viewer feels as though they’re being swept along through the film. NUGEN’s Halo Upmix made it possible for us to provide the unique ebb and flow of the production.”

Schultz says that his strongest takeaway from working with the NUGEN software is the flexibility that is coded into it. “Halo really gives the end-user the flexibility to dial-in the type of upmix they want,” he says. “That includes everything from center channel diffusion, to low-frequency loading and dispersion out of the center channel to width of the surround as well as the diffusion into the surround. For creative upmixing, there’s not a one-button set-it and forget-it process. We really need the tools to be able to dial it to our taste and intent, especially on a film like this. Halo Upmix was a welcomed addition to our workflow on Once Upon a Time in Hollywood, and we made good use of it, too – nearly every featured song in the film went through the software. The NUGEN team was great to work with, too. From the minute I reached out and told them what we were working on, what we wanted to try and what we were looking for, they were eager to help out and their communication was on point.”

Information about the NUGEN Halo Upmix, along with NUGEN Audio’s complete product family, is available at www.nugenaudio.com. For all other inquiries, please email [email protected].

NUGEN Audio is a manufacturer of innovative and intuitive professional audio tools that provide the broadcast and post-production industry’s most advanced solutions for surround upmixing and end-to-end loudness management, metering, and correction from content acquisition through to playout. Reflecting the real-world production experience of the NUGEN Audio design team, the company’s products make it easier to deliver high-quality, compliant audio while saving time, reducing costs, and preserving the creative process. NUGEN Audio’s tools for audio analysis, loudness metering, mixing/mastering, and tracking are used by the world’s top names in broadcast, post-production, and music production. For more information, visit www.nugenaudio.com.