Lavalier microphones are not a new concept — they were invented for telephone operators in the 1930s. In the broadcast industry, lavs came of age during the early era of live television in the 1950s. Before then it was impossible to hide microphones. They were too bulky and had to be hung from a boom.

The term “lavalier” referred to a small microphone that could be hooked into the buttonhole of the lapel of a coat. The main purpose for “lav” microphones was freedom of movement.

In 1953, Electro-Voice introduced the Model 647A, a small omnidirectional dynamic microphone fitted with a cord to go around the neck. The body of the 647A weighed two ounces and appeared about the size of a small link of sausage. In 1954, Shure introduced the larger 530 Slendyne, which could be handheld, mounted on a stand or worn around the neck on a “lavalier cord.”

On NBC’s TODAY show in the 1950s, host Dave Garroway made portable microphones famous. He wore an RCA BK-4A “Starmaker” microphone on live TV. Weighing about a pound, it was held by what appeared to be a harmonica holder around his neck.

RCA billed the Starmaker as “the vanishing microphone,” though it was easy to see by anyone but the blind. It contained no tubes and — according to RCA’s marketing material, “used principles of modern camouflage” to blend with the user’s clothing.

The golden age of lavs came in 1969, when Sony introduced the revolutionary ECM-50, the first truly tiny condenser lavalier microphone. It took the television production world by storm.

Now, more than 50 years later, there are a range of different lavalier designs at various cost levels. Each one is built for a unique application. Some are waterproof, but the main differentiators are either omnidirectional and directional pickup patterns and proximity versus transparent sound quality.

Omni lavs don’t need to be lined up with the mouth. Some lavs are used very close to the mouth — such as with earsets, headsets and head-worn mikes. Omni lavs are more convenient for video makers because of their flexibility for rigging and mounting. These mics can be attached to ties, collars, shoulder straps, hats, eyeglass frames and in the hair. The angle of the microphone is not important — only the distance.

For lavs used further away from the sound source — such as for a choir or on a podium — a mic with a cardioid or hyper-cardioid pattern is best. These mics are always pointed toward the speaker’s mouth, and work best for sound reinforcement of live lectures and presentations. Directional lavs are also often used in broadcast studio situations when the talent doesn’t move around and there is no concern about seeing the mic.

When using directional lavs, remember the mics are highly sensitive to handling and wind noise — far more so than with omni mics. Wind protection and other mounting aids are recommended to help reduce noise with this type of mic.

Another way to categorize lavalier mics is by the way they sound. A mic sounds natural (ortransparent) when the audio is the same at some distance from the sound source. Mics that emphasize and boost the voice up close are proximity types. The best way to determine the difference is by testing the mics.

A good test for this, says Audio-Technica, a manufacturer of lavalier mics, is by holding the lav up to the chest and begin speaking. Continue speaking while slowly moving the microphone further and further away. Transparent lavs will show a slight decrease in volume, but will retain the mic’s overall tonal quality a full arm’s length away.

If there’s a noticeable drop off in fullness and volume after about a foot, it’s a proximity lavalier. This type of lav emphasizes the human voice, providing a rich, announcer tone. Proximity mics have less reach, so they must be mounted a few inches from the subject’s mouth.

Broadcasters prefer proximity lavs, which are excellent for video interviews, news anchors, studio television production and any application where there is a need to isolate the speaker from the surrounding environmental sounds.

Today’s condenser microphones are so tiny, most are barely visible to the eye. With the trend to hide microphones on camera, sound operators have spent years developing techniques to protect these miniature microphones from picking up unwanted noise.

Lavs have always been suspectable to both clothing and acoustic noise from human movement. When used outdoors they can easily be affected by wind noise.

Noise can result from clothing rubbing directly against either the mic’s capsule or the cable, which can be equally sensitive to movement. Because of this, a whole bible of techniques has been developed to keep lavs from creating various kinds of noise.

It normally starts with careful positioning and taping down the mic and cable. Secure the clothing on both sides of the mic capsule. This can be accomplished by sandwiching the mic between two sticky triangles of gaffer’s tape. Fold this tape into a small flag. By securing the mic between two layers of clothing, the possibility of rubbing against the mic is eliminated.

If the lav has to positioned between skin or clothing, or attached directly to skin, then use medical/surgical tape that won’t irritate the skin.

Once the mic capsule has been secured, the cable needs to be restrained. It is best to make a small loop just under the mic capsule to eliminate noise. Sometimes two loops is necessary if the mic is highly sensitive. Use a thin strip of tape — sticky side out — to preserve the loop. But make it loose enough to absorb cable pulls and tugs.

It is useful to put a few inches of tape along the cable below the loop. In this way the tension on the cable is absorbed. The end of the mic connector should also be secured against a jerked cable. 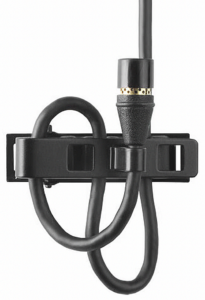 Even when using an outside tie mount for a mic, it is still important to create cable strain relief. When the cable loops downward, it should be inserted between the jaws of the tie clip and the back of the garment.

It’s more difficult to control acoustic clothing noise. Sometimes there is no simple remedy — only prevention. Some tools can help. RØDE created the InvisiLav, an adhesive shield designed to conceal lavs.  The shield’s soft material absorbs noise and vibration, while the wide, flat panel provides coverage from the elements.

InvisiLavs come with pre-cut adhesive that’s safe for human skin. It can be used to mount to either the body or to fabric. A pack of three is $18.

Lavalier microphones are very useful tools for video production. They can be purchased at a wide latitude of prices. Understand, however, exactly which type you are buying in advance. Having a large number of choices can be good, but only for the educated shopper.