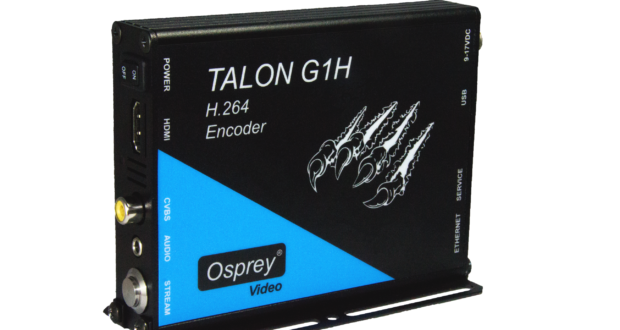 Hardware Encoders
Osprey Video‘s line of hardware encoders — launched at last year’s NAB Show with the award-winning Talon G1 three-channel streaming contribution encoder — continues to mature with the addition of new models, new features, and new and tighter integrations with some of the industry’s leading streaming platforms. Such integrations, a key focus for Osprey Video this year, reduce complexity for the user by creating streaming solutions for multiple applications in numerous industries.

One of Osprey Video‘s encoders is the new Talon G2, which will be on display at the 2017 NAB Show. Designed for organizations that use a single encoder in narrowcasting scenarios, such as corporate communications departments and houses of worship, the Talon G2 offers professional-level features in a device that’s easy enough for volunteers or other novice users to run. For example, like its Talon G1 predecessor, the Talon G2 includes an SDI input that allows it to connect to broadcast-grade cameras, but with a touch-screen LCD display and a simple start/stop feature that require little to no broadcast knowledge to use. Also like its predecessor, the Talon G2 integrates with the Wowza Streaming Cloud” service and YouTube, in addition to new integrations with the Zixi Platform and others.

Capture Cards
Osprey Video‘s capture cards are the company’s bedrock, and the proven technology behind those cards serves as the basis for every other Osprey product. As such, Osprey capture cards continue to evolve based on customer input and industry trends. This year Osprey Video will launch its new 900 Series capture cards with several features its customers have been requesting, such as bidirectional ports and support for 4K, UHD, 12G, HDMI 2.0, IP, and quad-channel HDMI up to 4K. Visitors to Osprey Video‘s booth at the 2017 NAB Show will get the first glimpse at this new generation of capture cards.

Converters
As part of Osprey Video‘s lineup of end-to-end live-streaming workflow products that complement its flagship capture cards, the company is continually building upon its family of converters. In addition to SDI-to-HDMI and HDMI-to-SDI converters and miniconverters that are already available, Osprey Video‘s converter roadmap includes scaling converters for 3G-SDI to HDMI and vice versa, along with 6G-SDI, 12G-SDI, and HDMI 2.0 fiber extenders.

One converter product that will be on display at the 2017 NAB Show is the Osprey Video SDI multiviewer, which has four 3G-SDI inputs, two 3G-SDI outputs, and one HDMI output. The multiviewer is capable of up/downscaling, frame rate conversion, color space conversion, and deinterlacing, while information overlays depict resolution, frame rate, channel identification, and audio meters. Users can operate the unit via DIP switch or Ethernet controls.

USB Capture Devices
Built on the trusted technology behind its popular capture cards, Osprey Video‘s external capture devices connect directly to a user’s computer via USB 3.0 to capture video from either 3G-SDI or HDMI inputs. Both the 3G-SDI and HDMI versions offer hardware scaling, status display, and a push-button user interface. Compatible with Windows(R), Mac(R), and Linux operating systems, the devices are ideally suited for laptop-streaming applications using the standard UVC and UAC drivers. Both versions of the USB capture device will be on hand at the 2017 NAB Show.
Company Overview

About Osprey Video
Osprey Video‘s premium video-capture technology has long driven mission-critical video delivery in industries ranging from broadcast, internet TV, and surveillance to enterprise, government, and aerospace. Now the technology in its flagship capture cards and drivers is the foundation for its end-to-end line of live-streaming and encoding products, which allow customers to satisfy increasingly higher expectations for online video in all environments, including more traditional A/V environments such as education, corporate communications, and houses of worship. The company is continually expanding its product portfolio to meet customer demand for high-quality, reliable tools in ever-evolving video applications — from video over IP to closed captioning, mobile streaming to 4K capture and distribution & and beyond. More information is available at www.ospreyvideo.com.