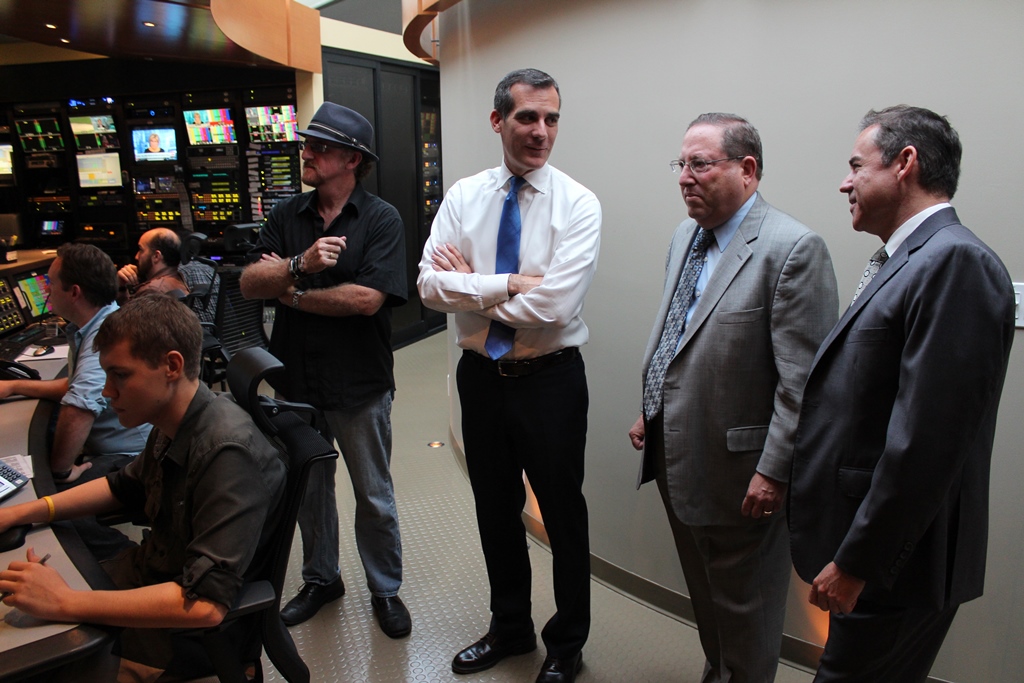 LOS ANGELES, OCTOBER 20, 2014 – Pacific Television Center (PacTV), a Los Angeles-based independent global transmission and production company, recently hosted Los Angeles Mayor Eric Garcetti and Councilmember Paul Koretz at the company’s Motor Avenue headquarters. The visit was part of the Community Day in CD5 tour, focusing on local businesses that support economic development in the 5th council district of Los Angeles. One of seven businesses chosen to participate, PacTV was selected not only for the high-tech nature of its broadcast operations, but also for its recent expansion, supporting job opportunities and economic development in the area.

A resident of 3440 Motor Avenue for more than 20 years, PacTV has been a leading transmission and live production provider to the global broadcast industry since 1980. Earlier this year, PacTV announced that it completed the acquisition of its current building. This purchase cements the future of the company’s physical location and is a positive investment in the neighborhood’s economic future. Over recent years, Motor Avenue and the surrounding area have been evolving into a major business hub, with an increase in many corporations calling the area home.

“When I toured Pacific Television Center (PacTV) a few months ago, I was tremendously impressed by the innovative engineering that the company brings to broadcast production and transmissions to cities across the world,” says Councilmember Paul Koretz.  “That’s why I thought it would be great to invite Mayor Garcetti to see, firsthand, PacTV’s thriving business, high-tech nature and the positive impact of its expansion in Council District 5.  Specifically, I wanted to showcase PacTV’s integral role in job creation and economic development, because it is crucial that we highlight one of the District’s largest and most vital assets, the Entertainment industry.”
Richard Neri, president of PacTV, hosted Mayor Garcetti and Councilmember Koretz, giving them a tour of the company’s Master Control Room (MCR), HD studios and its 15-dish satellite farm. The trio spent time discussing PacTV’s history in the area, highlighting how the company evolved from an adhoc broadcasting start-up into a state-of-the-art HD-ready, full service global content aggregation studio.

“It was such an honor to welcome Mayor Garcetti at our headquarters,” says Neri. “PacTV has made Los Angeles its home base for a long time and we have seen many positive changes over the years. We are so happy that Councilmember Koretz orchestrated this tour. PacTV is firmly planted in the intersection of broadcast and IT, two of the most active, innovative markets today. We are proud to have our innovation promote job growth and economic development in this area, and are so pleased to have the support of the local government to help us continue to do so.”

For more than 30 years, Los Angeles-based Pacific Television Center has been a leading transmission and live production provider to the global broadcast industry offering its clients around-the-clock support and services in fiber connectivity, satellite coordination, receive and records, multi-format tape play outs, live shots, satellite media tours and voiceovers. On a local level, its broadcast facility in Los Angeles connects to the ATT Hollywood Hub and The Switch Los Angeles; in New York, it connects to Encompass/Waterfront, The Switch New York and Azzurro; and in London, its facility has multiple circuits to and from The BT Tower.