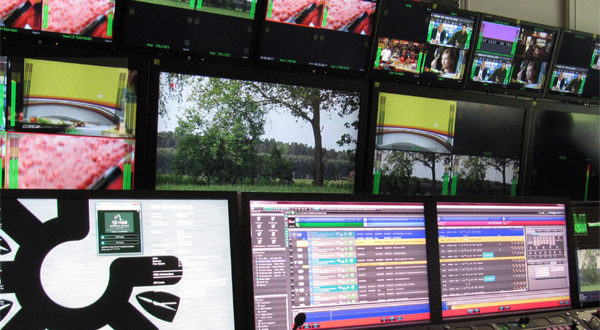 Pebble Beach Systems recently announced that it has completed an upgrade of the broadcast operations for Quebec-based Groupe V Media, one of Canada’s largest French language broadcasters. Pebble Beach Systems upgraded their broadcasting capabilities with their Marina and Dolphin products. Dolphin is their low cost integrated channel device with Marina being the company’s extremely powerful ingest, multi channel automation and content management solution.

Pebble Beach Systems, based in Weybridge, Surrey, UK, is a world recognized leader and innovator in channel-in-a- box, automation as well as integrated and virtualized playout technology. All of the company’s products are scalable and specifically designed for efficient multi channel transmission as well as for both sports and news broadcasts. The company’s systems are installed in over 70 countries around the world with system solutions designed for one to 150 channel operations.

Groupe V Media, based in Montreal, owns a large broadcast network in addition to two smaller networks in the country. Groupe V Media went to Pebble Beach with the challenge of wanting to simplify its entire infrastructure operation and consolidate all of its broadcasting operations. In addition, they wanted their new automation and playout systems to work together effortlessly with their established Louise traffic system.

Danick Beaulieu, Group V Media’s Director of Operation stated that, “One of our primary objectives was to make sure that our new system would not only work seamlessly with our existing traffic system but also offer a smooth migration from our legacy Sundance and Florical systems. We conducted a very thorough evaluation and were impressed with the ease of integration and flexible workflow offered by Dolphin and Marina, along with Pebble’s ability to really listen to our needs.”

Replacing all of their older devices with the upgrade of Marina and Dolphin, Groupe V Media will now be capable of using their three Dolphin integrated channels servers with the Marina operation. This will let them have full control of all playout of videos, subtitles and graphics of their leading master channel in Montreal as well four other regional and two specialty channels.

Groupe V Media’s Vice President of Operations, Richard Roy commented that, “One of the key benefits of the Dolphin/Marina system is that it just pretty much runs on its own. There’s no need for 24/7 staff and we feel confident when we go home at night.”


AlertMe
Kevin Sawyer
Mr. Sawyer is a freelance writer, editor and journalist from Tampa. He has written thousands of articles for hundreds of magazines and news sites on countless topics including science, the media and technology. He is also the author of many white papers, special reports and ebooks covering a wide range of subjects.
Latest posts by Kevin Sawyer (see all)
Broadcast Engineer Broadcast Engineering integration Video Engineer 2016-12-29
Kevin Sawyer
Previous: College Student Tech
Next: Pixel Power’s ChannelMaster Launches New Channels @pixel_power