LOS ANGELES – To bring back the era of “Old Hollywood” for a recent Badgley Mischka bridal photo shoot, photographer Catherine Asanov set the mood in the historic Roxie Theatre in downtown Los Angeles with a cockatoo, a model, and a swing.

To begin the day, Asanov and her crew rigged the swing above the area that once held rows of audience seats. Once the shot was complete, the swing was removed and other setups were 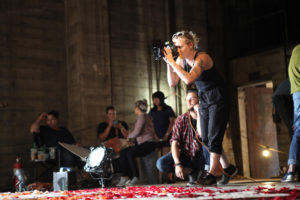 staged throughout the venue.

“We wanted to do something different that hasn’t been done in a bridal campaign and create a mood,” Asanov recalled. “The location choice and lighting direction were vital to the outcome. The Hollywood glam vibe is so important to Badgley Mischka as a brand, so we really wanted to bring back that timeless element of elegance back.”

Before four daylight-balanced Zylight F8-200 LED Fresnels were used to light the talent, they had a more practical purpose. It was only the second booking since the 1930s theater location was reopened as a rental space for professional film and photography shoots, and there were only two working lights (practically household bulbs) in the large venue. The battery-powered Zylights were able to illuminate the area while Asanov and her crew started a generator to power other lights and equipment.

“Zylight just lit up the whole space for us,” Asanov said. “We needed a constant light. The modeling lights on my strobe would not have done that for me. Zylight really got us through the day.”

Asanov had previously used Zylights for other shoots, and said the F8-200s were effective as both accent and broad light sources during the shoot, particularly for wide shots that included large areas of the theater. Some of the F8-200s were 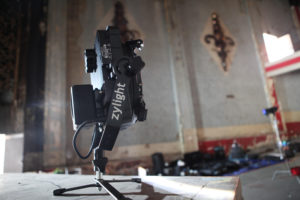 even used on the set as props to recreate Hollywood glamor lighting. “Zylight filled in any harsh shadows that we didn’t want,” she explained. “They also became part of the shoot itself.”

While Asanov rarely uses constant light, the Zylights were helpful during the Roxie Theatre shoot. “With constant light, you pretty much light it up and you know how it’s going to look on camera,” Asanov said. “Having a Fresnel with such a thin and lightweight design is amazing for a photographer, and it makes me want to explore more with constant lighting.”

One shot featured the model sitting on a couch that is surrounded by rose petals. Asanov needed the wall behind the Fresnels in the frame to be illuminated, so she used one of the off-camera F8-200s to provide a constant light source.
“Zylight is my go-to constant light source,” Asanov added. “I like the design – reminds me of the old school Fresnels, but has the intelligent technology that old school equipment does not offer. Just what a modern day lighting geek needs.”

ABOUT ZYLIGHT LLC
Founded in 2003, Zylight LLC is the leading manufacturer and distributor of intelligent LED lighting instruments for the film and video production industry. Every model in its easy-to-use lighting system produces fully calibrated bright white light, while some also provide a spectrum of adjustable colors without gels. Full wireless control and DMX integration are included, and AC or DC power options are available. The Zylight state-of-the-art LED system is truly the most unique and flexible lighting system on the market today. With more than 100 dealers worldwide, Zylight continues to develop innovative LED lighting solutions to help make your job easier. More Than Bright – Zylight. Find out more at www.zylight.com.