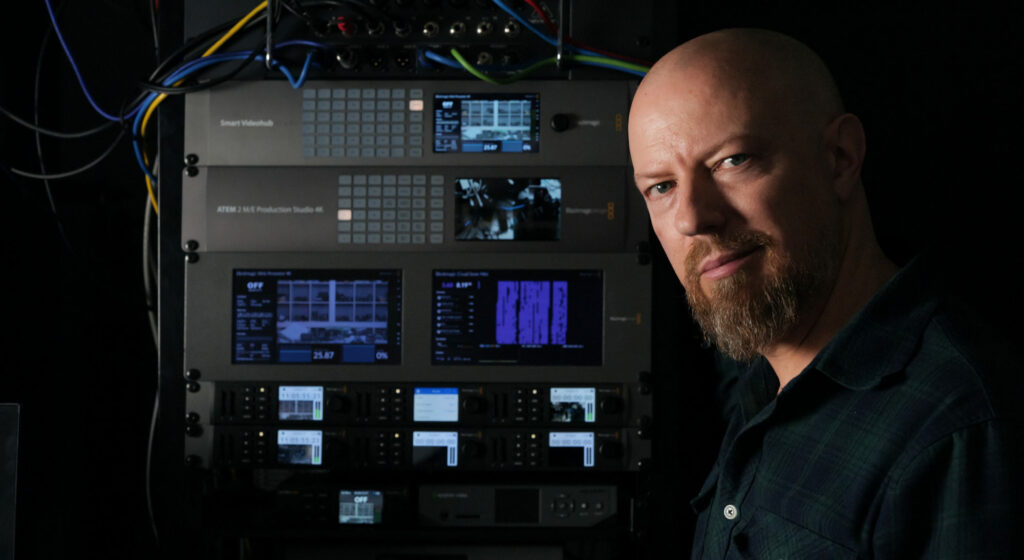 PhotoJoseph launched his YouTube channel in 2016 as a resource for aspiring photographers and filmmakers, initially live streaming up to five times per week to explore the techniques and gear behind the industry, and eventually changing formats to primarily edited content. In 2021, he made the switch to fully complete all of his post production work in DaVinci Resolve Studio. In addition to the video content posted on the channel, PhotoJoseph still live streams regularly and discusses new industry tools as well as tutorials for his viewers, all from his studio.

Just recently, PhotoJoseph added a Blackmagic Cloud Store Mini and standardized on Blackmagic Cloud to accommodate his growing team and outsource editing. With two assistant editors based out of Ukraine, and a new Spanish language localization team in Colombia, PhotoJoseph needed a way to share and collaborate on his large project libraries with his remote team.

“I love the clean, seamless workflow of the Cloud Store Mini,” he said. “I use a SmartView Duo monitor in my rack or another monitor at my desk to keep an eye on the live status of my Cloud Store Mini via its HDMI monitoring output, including storage maps, speed graphs, active users and more. It’s such a cool feature to see what’s going on in real time.”

With a multi camera setup to shoot his video content, PhotoJoseph relies on an ATEM 2 M/E Production Studio 4K live production switcher and six HyperDeck Mini broadcast decks for recording. Ultimately storing the footage captured on the HyperDeck Minis to the Cloud Store Mini via a 10G network, PhotoJoseph relies on the Blackmagic Proxy Generator App to generate proxies from the original footage which are then automatically synced to Dropbox for his editors to access remotely.

“Depending on the project, my assistant editor may begin editing a rough cut of my video on Blackmagic Cloud,” PhotoJoseph explained. “I’m then able to review their edits and make changes myself from my laptop, anywhere in the world. With Blackmagic Cloud and the collaboration features in DaVinci Resolve 18, I’m no longer constrained to my office, which has really opened my creativity.”

He added, “Blackmagic Cloud has also allowed me to expand my team beyond my local talent. I can now hire anywhere in the world, and truly collaborate with the best in the business.”

PhotoJoseph reflected that he was originally drawn to DaVinci Resolve Studio’s color grading features but soon found himself using additional tools. “I use the Fusion page to create simple effects, like animated titles or a touch effect on an iOS screen, and occasionally dive deep into that rabbit hole creating wild compositions seemingly beyond my abilities, while Fairlight is particularly helpful for sweetening my dialogue and balancing the sound. Overall, DaVinci Resolve Studio allows me to create better looking and sounding content, all within a single platform.”

Looking ahead, PhotoJoseph is using his Blackmagic Cloud workflow to help set up his newest venture, PhotoJoseph Español, a Spanish language version of his YouTube channel. PhotoJoseph is already starting work with a remote team in DaVinci Resolve to dub his videos, provide Spanish subtitles and update the titles and text.

PhotoJoseph concluded, “With Blackmagic Design, I can accomplish so much more and work on projects that I could have never done before. I’m excited to see what I can create next!”