Stand Z1-111, CABSAT, Dubai, 8 – 10 March 2016: Pixel Power, the automation, branding and graphics innovator, is drawing on its pedigree of nearly 30 years of uncompromised excellence for a new generation of automated production products. Already proving popular in the Middle East, these systems will be showcased at CABSAT 2016 (World Trade Centre, Dubai, 8 – 10 March).

“Our Clarity platform has been an unrivalled leader in broadcast graphics, for its creative freedom as well as for its technical quality,” said James Gilbert, CEO of Pixel Power. “What we have long recognised is that real-world broadcasters need to balance creative freedom with operational efficiencies, automating repetitive tasks and freeing the creative experts for tasks that really need their skills.”

Pixel Factory draws on the Clarity 3D graphics engine. Its automation layer allows it to generate large numbers of sophisticated clips, such as promos, trailers and marketing content. It uses templates, information entered by the commissioning producer, and direct access to the asset management system. Pixel Factory automatically generates all versions of a clip – “coming soon”, “tomorrow”, “later” and “next”, for example, as well as multiple resolutions for broadcast and online services – thereby completely eliminating much unproductive manual work.

Pixel Factory is widely used at MBC in Dubai for automated trailer production. MBC estimates that automated content production has halved the post production requirement for trailers and promos.

StreamMaster is the newest solution from Pixel Power aimed at assisting the move to an IP workflow. It also builds on the Clarity 3D graphics engine, this time to create an integrated playout platform. The modular software platform can run on dedicated hardware, virtualised in a data centre or in the cloud. Because it is a software-defined system it is format agnostic and capable of continuous scaling and flexibility, allowing it to support even complex channels. This results not only in impressive cost savings but also allows new pricing models, including pay-as-you-go for trial channels and pop-up services.

“The Middle East and North Africa market has always been very important to us,” said James Gilbert, CEO of Pixel Power. “We have sales and support resources based in the region, and we appreciate the way that broadcasters here are open to new ideas, exploring ways of creating a more effective, more engaging and more efficient operation.

“At this year’s CABSAT we are showcasing our latest, proven products, and taking technology that has proved popular, implementing it in software, and placing it at the heart of a software-defined, IP future,” he added. “Our format-agnostic, future-proof automation and graphics software modules could represent the last decisions you ever need make in graphics and automation.” 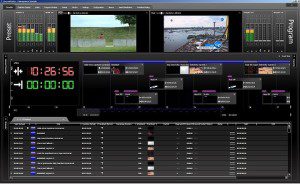