NEW YORK, AUGUST 16, 2016 – Boasting more than 100 practice rooms, 35 private teaching studios and six performance venues, The Juilliard School at Lincoln Center is the world’s most renowned school of performing arts. To meet the critical needs of its productions, Juilliard employs Pliant Technologies’ Tempest900 wireless intercom systems in four of its theaters, including the Peter Jay Sharp Theater, Stephanie P. McClelland Drama Theater, The Harold and Mimi Steinberg Drama Studio, and most recently the Rosemary and Meredith Willson Theater. Julliard’s recording department also uses Tempest900 as a roving system that moves between two different spaces for a total of five Tempest900 wireless intercom systems throughout the facility The Tempest900 wireless intercoms will facilitate production of dance, opera, orchestra and special events. 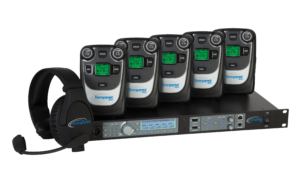 Implementing wireless RF audio devices of any kind at The Juilliard School was a challenge considering the school occupies eight levels, several of which are underground. The main theater – the Sharp Theater – is partly underground, and the building is constructed of dense walls that can create RF barriers. In the past, this had made wireless communications coverage a challenge. Initially the school attempted to use another wireless intercom technology in the Sharp Theater that limited the coverage of the system to only the stage area. The dressing rooms for this facility are on multiple levels and are also constructed of dense walls so it was not possible for other systems to maintain communication between the stage and the dressing room areas.

Pliant Technologies’ Tempest900 wireless intercom proved to be the solution that Juilliard needed, offering reliable coverage at an attainable price point. Tempest900 is a digital wireless intercom system operating license-free in the 900MHz ISM band. Tempest900’s longer wavelengths allow signals to pass through structural objects increasing usable range. The Tempest900 system is able to provide coverage across all three floors of the Sharp Theater. Due to the success it found in the Sharp, McClelland, and The Harold and Mimi Steinberg Drama Studio theaters, the school added a Tempest 900MHz system into the Willson Theater.

Installed in the Sharp Theater are two Tempest BaseStations and ten BeltStations. The McClelland Theater, Rosemary and Meredith Wilson Theater, The Harold and Mimi Steinberg Drama Studio and the roving system each employ one BaseStation and five BeltStations. The flexibility to easily change setups ensures Juilliard’s production department that the Tempest900 system can effectively handle all of their intercom requirements regardless of the production. Since it is compatible with 2-wire and 4-wire systems, Tempest900 easily integrates with Juilliard’s existing wired intercom system.

Tempest employs Frequency-Hopping Spread-Spectrum (FHSS) technology, which allows the RF to change frequencies hundreds of times per second, avoiding conflicts with other RF devices. As a result, frequency coordination between intercom and wireless microphone systems is not required. An added bonus is that due to Tempest’s 900 MHZ frequency range and FHSS technology, the Juilliard venues have increased access to more UHF frequencies for use with wireless microphones, instrument systems and in ear monitors.

More information about Pliant Technologies is available at www.plianttechnologies.com.

About Pliant Technologies
Pliant Technologies, the new professional intercom division of Auburn, Alabama-based CoachComm, has been created to address the unique needs of customers in the professional marketplace. CoachComm is best known for the revolutionary Tempest wireless intercom system, which is used daily in more than 40 countries in industries such as broadcast, live-sound, theater, theme park, event management, and maritime, as well as in many other applications. Developing communication technologies that are dependable, durable, and easy-to-use has made CoachComm the worldwide leader in critical communication solutions