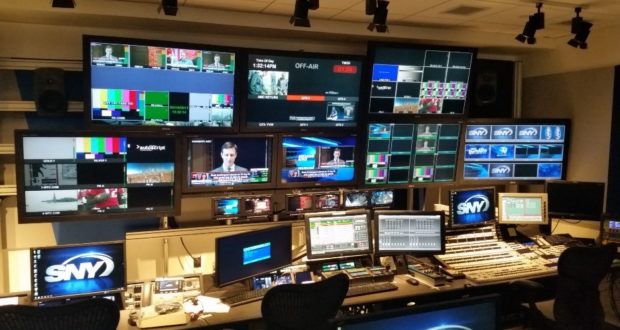 SportsNet New York, aka SNY, the official television home of the New York Mets, Jets, and all things New York sports has recently relocated from midtown Manhattan to 4 World Trade Center in lower Manhattan, sky high to floor 50 and included in the fold were a total of 90 new and existing Plura  monitors ranging from 9” to 55”.  SNY’s selection of using Plura came close to 9 years ago. The experience since 2009 is nothing short of bright with years on end without an issue.  A range of display sizes from 46” and 55” multi viewers to 32” program and preview displays to 17” & 19” QC monitors that are generally used, must match exactly over time and the Plura displays have proven themselves project after project.

Plura monitors have easily reached their 5 plus year operational life span to a 365 day 24/7 operation that services New York, Connecticut, New Jersey, and northeastern Pennsylvania, and nationally on DIRECTV, Verizon FiOS, Comcast Cable, and AT&T U-Verse. With a ”jaw-dropping” 30,0000hrs of use with calibration when needed, the usage of one calibration tool kit for the entire facility has made Plura the standard for SNY. Edit rooms, graphic rooms and control rooms are fully outfitted to meet the demanding broadcast needs with failure not being an option for this high powered operation.

“The Plura monitor product line has every type of monitor you need from an economy application to the highest end. The price points and feature sets runs the gamut from the top to bottom. You can always find a fit for Plura in your facility”, said Alex Blanding, Vice President of Engineering at SportsNet New York.

Plura Monitoring & Timing solutions are used extensively throughout the facility and control rooms to provide consistent SMPTE calibrated colorimetry and intelligent MTDoE technology (Multi-Time  Display  over  Ethernet).  MTDoE  is  an  exclusive studio-timer  solution  was developed and designed by PLURA to deliver reliable, accurate and feature rich system. Selection of the Plura displays and MTDoE over others in the market was not difficult as Plura products offered the performance we were looking for and the product support history confirmed by other installations in the market place. The Plura “SPT“ Studio Production timers are operator friendly, can be configured at any workspace, has swift implementation using Ethernet infrastructure, PoE capable and can sync to NTP as reference source.

For more information on the most powerful and highly reliable monitoring line on the market go to: www.plura.tv/