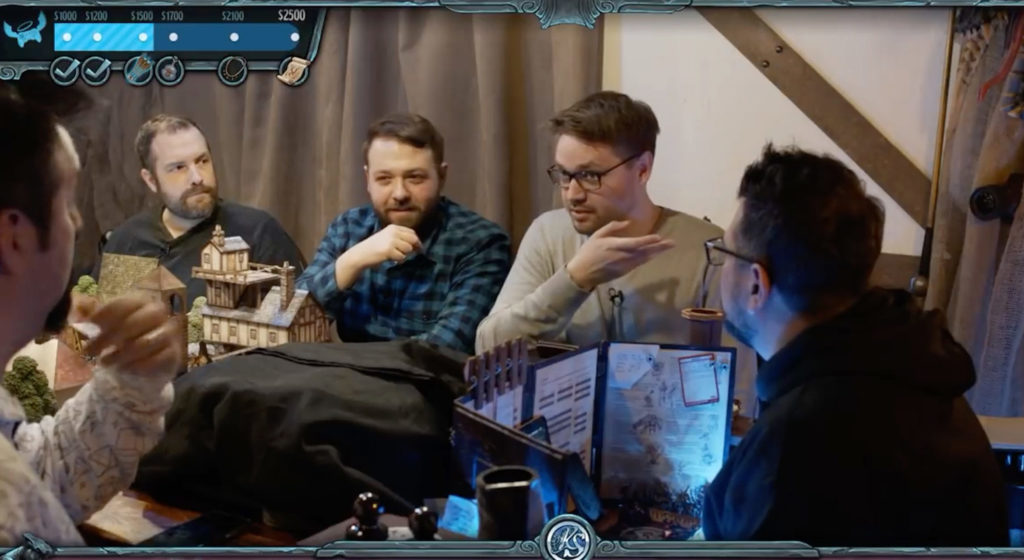 Fremont, CA – May 4, 2020 – Blackmagic Design today announced that RealmSmith.tv is using its products to live stream the hit tabletop gaming series “Into the Mist” on Twitch, and using DaVinci Resolve Studio’s cut page to quickly edit each show’s highlights for YouTube.

RealmSmith.tv is a Toronto, ON based live streaming and tabletop gaming company, and “Into the Mist” features improvised live play of Dungeons & Dragons’ “Curse of Strahd” campaign setting. Jason Azevedo, founder and president of RealmSmith.tv, acts as Dungeon Master alongside weekly players gathered around an immersive table setup, where players and viewers are made to feel they are part of the game experience. Joel Augé, co owner of RealmSmith.tv, manages all aspects of the stream’s production and workflow.

When RealmSmith.tv embarked on “Into the Mist,” they decided to produce the show as a multi camera live stream to keep viewers entertained throughout the episodes. They initially invested in an ATEM Television Studio HD live production switcher, two Blackmagic Micro Cinema Cameras and two Blackmagic Pocket Cinema Camera 4Ks to achieve a more cinematic feel. They later incorporated two additional Pocket Cinema Camera 4Ks so they could further enhance the experience by capturing more camera angles.

“While a lot of live streams are based on a single, frontal view where players call in from their own homes with webcams, we wanted ‘Into the Mist’ to show everyone in the same room with multiple camera angles and proper lighting,” said Azevedo. “We really separate ourselves by having such a professional, cinematic look to our live streams.”

Additionally, RealmSmith.tv uses an ATEM Television Studio HD to switch between the cameras and to map out sequences of camera changes and animations. Since starting their live stream in a garage just two years ago, having gear like the ATEM Television Studio HD has helped keep RealmSmith.tv’s stream professional, regardless of the physical location they are shooting.

“The ATEM Television Studio HD is the brain of the live stream,” explained Augé. “Without it, we wouldn’t be able to do title shots on the fly and switch a dynamically produced live show at home.”

When the team has to stream remotely, Augé uses a Blackmagic Web Presenter to power his workflow from home. “It’s been a workhorse for when we’ve had to adapt our normal workflow and stream the series remotely, helping us deliver a high quality stream even when battling lower bandwidth situations,” said Augé.

Following each week’s three hour live stream, which airs on Dungeons & Dragons’ and RealmSmith.tv’s Twitch channels, RealmSmith.tv uses DaVinci Resolve Studio’s cut page to create a recap for the beginning of each show on their respective YouTube channels.

“We go through the full stream the day after a show goes live and highlight markers and times in the episode that we want to emphasize in the recap, and then pass that on to the editor,” said Augé. “He then takes the live stream files and brings them into DaVinci Resolve Studio’s timeline, using the cut page to edit together the recap.”

Being able to see the full three hour gaming session on the cut page’s timeline allows RealmSmith.tv to navigate as quickly as possible from one cut to the next.

“Essentially, three hours of game play is cut down to about three minutes for the recaps. Using the cut page’s streamlined editing workflow allows us to quickly turn around the content, so we can post it to YouTube as soon as possible. Without DaVinci Resolve Studio, it would be a much longer process and we’d have significant lag time between the live streams and final videos,” explained Augé.

RealmSmith.tv also used DaVinci Resolve Studio to create the popular intro to the “Into the Mist” series, an animated sequence that reveals each player, blending together their real life selves with their characters. The team relied on the edit page’s Retime Curve tool to create the dramatic effect of smoke going through the characters during the intro. They then modified the video’s speed by mapping out different segments of audio with markers and then timed the video clips to the music.

“Like any small business, budget is very important to us. Having affordable, feature rich gear that delivers great cinematic quality like the Pocket Cinema Camera 4Ks and DaVinci Resolve Studio made Blackmagic Design perfect for us from the start,” concluded Augé.