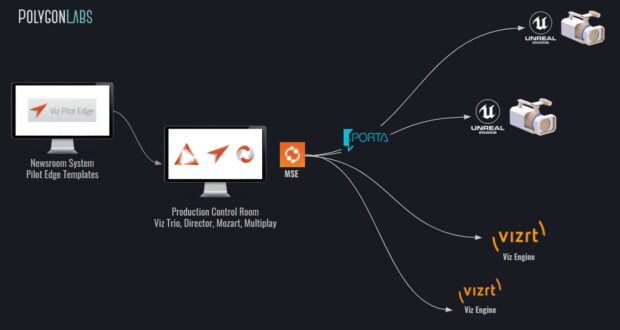 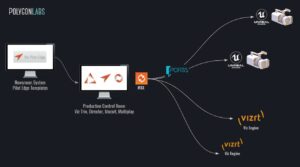 Polygon Labs, an innovative studio pushing the boundaries of interactive data applications and visual branding, has announced the expansion of Polygon Porta Gateway, the company’s workflow enabler that bridges the gap between TV content production workflows and the Unreal Engine 3D visualization tool for broadcast production.

Porta, which is used by a number of broadcasters including Univision, RTL, The Weather Channel and others, makes it possible for Vizrt control tools to send data and commands to Unreal Engine, with users able to control both Vizrt and Unreal Engine graphics simultaneously to join the two workflows. It also helps broadcasters to seamlessly integrate their newsroom and control room graphics workflow with Vizrt’s cross-platform template-based system, Viz Pilot Edge, and any playout control solution from Vizrt, with Unreal Engine. Porta sends data and commands coming from the Vizrt system to the Unreal Engine blueprints, allowing operators to seamlessly control multiple Vizrt and Unreal engines on a single playlist or automated show.

In combination with Polygon Labs’ recently launched Visual Data Plug-Ins (VDPs), journalists and producers can build data-driven graphics in Pilot Edge from their newsroom desktops and play them out with Viz Trio, Viz Director, Mozart or Multiplay and render them in Unreal Engine using Polygon Labs’ VDPs to visualize real-time data with bar, line, pie and other types of graphs.

David Jorba, Polygon Labs’ Chief Strategy & Business Development Officer, comments, “We see these new offerings as a way to simplify and streamline content production and broadcast production workflows among our users. It gives them a new opportunity to make the most of the best solutions available in the market today.”