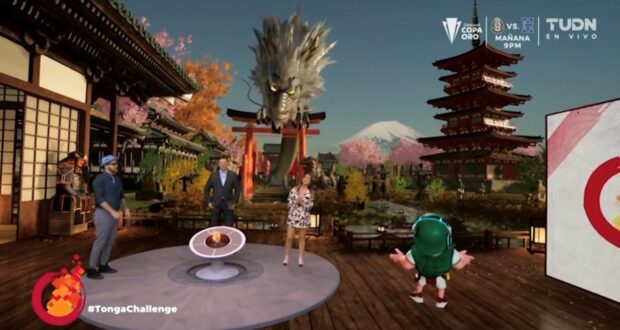 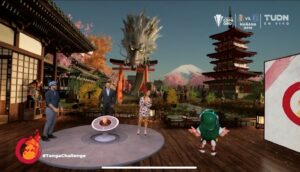 Polygon Labs, an innovative studio pushing the boundaries of interactive data applications and visual branding, has announced that it has completed the creation of a sophisticated virtual set for popular sports channel TUDN, which is owned by Univision and Televisa. The virtual set was built specifically for the show Tokio Nos Une and allowed the presenters to appear in four different worlds, all with a Tokyo theme. Tokio Nos Une is a two-hour program that aired recently daily during a primetime slot.

The sets were built by Polygon Labs using Epic Games’ powerful real-time 3D creation platform, Unreal Engine 4. The technical setup uses a Vizrt workflow, which includes Polygon’s Porta solution, providing a gateway between TV content production workflows and the Unreal Engine. Polygon Porta allows the operator to access the Viz Trio control interface to control the Unreal Engine at the same time, and with the same playlist, used to control Viz Engines. The production uses Viz Engines for lower thirds and full-screen content and Unreal Engine for other aspects, all from a single playlist thanks to Porta teams. The four-camera Unreal Engine virtual set uses stYpe Follower tracking, Stypeland UE plugin and Green Killer as the internal keyer.

Marco Antonio Abad, Director at Televisa and TUDN, commented, “This highly innovative technology allows us to be both creative and efficient. It means that whilst our presenters are hosting the show in Mexico, they all appear to be in Tokyo bringing sophisticated graphics to our viewers without leaving the Televisa studios in Chapultepec. The Polygon team quickly understood our ideas and were able to bring our creative vision to life with these four virtual worlds that mix with the real-life programming in a spectacular way. When you produce highly sophisticated live content like this, you can’t just use any company and expect these perfect results.”

“We’re really proud of this project for TUDN, which proved to be a highly creative collaborative process with everyone involved,” said Miguel Yabrudes, Polygon Labs’ Chief Creative Officer. “TUDN came to us with the four-world Tokyo concept and we all worked tirelessly over a four-month period to create this exciting Japanese virtual world. The finished designs look incredible and we couldn’t be more pleased with the results.”

According to recent stats, the cumulative audience for TUDN’s sports broadcasts and programs on its Channel 5 and Nu9ve channels have reached 136 million viewers, a figure 37 percent higher than that of its closest competitor and 112 percent higher than the second. Tokio Nos Une is one of the shows used to provide statistical analysis along with La Jugada, Sports Contact of the Tokyo 2020 Olympic Games and Action of the Tokyo 2020 Olympic Games (for their two broadcasts). Each of these shows is the highest rated in its time slot.