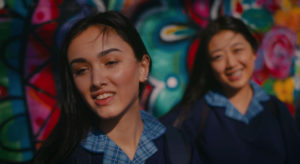 To film the show, Forster and Rowland chose to use the URSA Mini Pro as their primary camera, with the Pocket Cinema Camera 4K used for various tight or hard to reach shots in each episode.

“The show follows the lives of a number of teens, day and night. When shooting, there was a wide mix of low light, bright natural lighting and indoor nighttime shots where there was the potential for losing details in the shadows. So we had to plan for a huge number of different shooting sce-narios, all while having a small crew and tight budget,” said Forster. “The combination of the URSA Mini Pro and the Pocket Cinema Camera 4K freed us to be creative while knowing we were going to get the highest quality footage possible.”

“The cameras gave us a huge amount of dynamic range, and the footage looked great without a ton of artificial lighting. Instead of spending money on extra lighting, we could put our resources into getting exactly the shots we wanted and being as creative as possible. The cameras’, especially the Pocket Cinema Camera 4Ks, dynamic ranges are amazing and gave us the leeway to shoot in low light and know nothing was going to be blown out or lost in the shadows. On top of that, the skin tone we got was beautiful,” he continued.

On a tight budget, Forster and Rowland decided to use Blackmagic RAW, which allowed him to save resources on storage. Blackmagic RAW is a new codec that gives stunning image quality and fast performance in an intelligent new file format, offering both the quality and benefits of RAW with the speed, ease of use and file sizes of traditional video formats.

“Blackmagic RAW is great. We can shoot all day and not have to change cards, and we could just bring all the RAW files directly into DaVinci Resolve, so the post production workflow was easy,” Forster said.