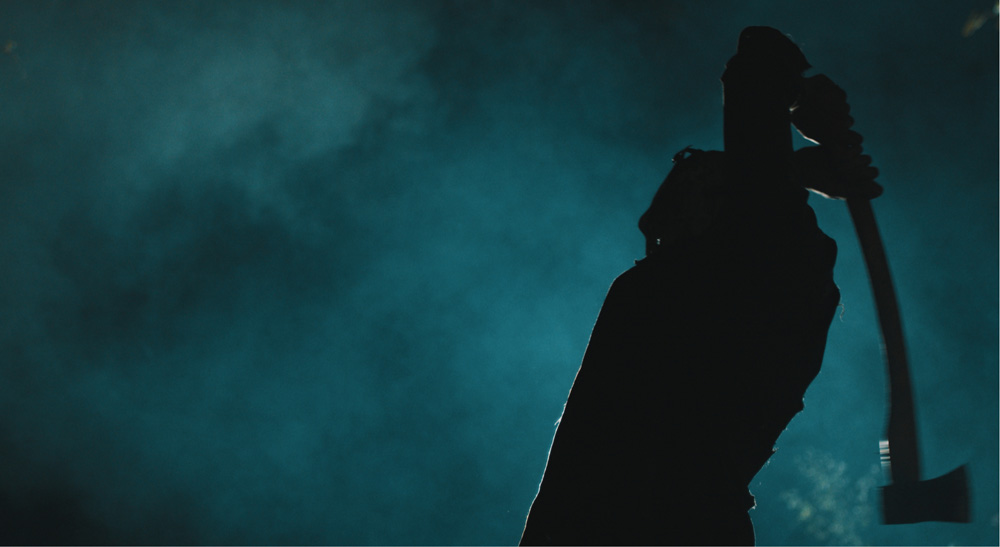 Fremont, CA – October 13, 2021 – Blackmagic Design today announced that “Jason Rising,” a hugely popular fan fiction film based on the Friday the 13th world, was shot using multiple Pocket Cinema Camera 4Ks and graded on DaVinci Resolve Studio. Shot on a micro budget, the film has been viewed more than 300,000 times by viewers all over the world in only three weeks of its release.

The film follows an escaped fugitive who is on the run and is hunted by an elite group of trackers and bounty hunters. The hunters become the hunted when they enter the campground haunt of the hockey mask wearing killer, Jason Voorhees. Starring Dan Kyle, Kyle Vahan, Anna Campbell and Jerry Ball Jr., along with original Friday the 13th star Adrienne King, the film is the creation of James Sweet and Oregon based filmmaker and musician Karl Whinnery.

Whinnery, whose roles included executive producer, cinematographer, editor, VFX supervisor and colorist, worked on the film for more than two years, including a year of pre production and a production schedule that was impacted by Covid and then massive wildfires in Oregon.

“I wanted to capture the magic of the first four films in the Friday the 13th franchise. This was a self funded film and everything was on a tight budget, but that in no way kept us from making a film that had the same quality as a Hollywood blockbuster. The Pocket Cinema Camera 4Ks were a huge part of making that possible and were the perfect fit for this scary low budget feature,” Whinnery said.

Going for a look that was a mix of the foreboding Friday the 13th horror feel, the haze and surreal lighting of the Evil Dead and the high action pace of Predator, Whinnery shot the film entirely on Pocket Cinema Camera 4Ks, capturing in Blackmagic RAW and with up to five cameras available.

On set, the crew typically had two handheld Pocket Cinema Camera 4Ks used with Flycam Flowline backpacks, one camera on a DJI Ronin S or S2, a camera on a tripod or dolly and a camera on a jib.

Whinnery continued: “I have been using Blackmagic cameras for years, and knew that they would get me the image quality I needed. But just as important was the fact that they let me be efficient. The camera’s menu and small size meant that my set up time between takes was a couple of minutes instead of the normal 10 to 20 minutes with other cameras. When you are filming late at night, no one wants to wait for 20 minutes as you balance a gimbal or rig up the jib.”

With the affordability of the Pocket Cinema Camera 4K allowing Whinnery to own numerous cameras, he was able to plan multicamera takes, quickly jumping between handheld and tripod shots.

“One of the big advantages of the Pocket 4K is the easy to use menu. We found ourselves switching between 24 fps and 22 fps for certain fight scenes. With the Pocket menu, we were able to set frame rates on multiple cameras and toggle back and forth. Along with being able to set presets for false color and frame guides, we were able to quickly get to filming instead of playing with settings,” he continued.

Due to the nature of the story, most of the film was shot at night and in the Oregon wilderness. Relying on the Pocket Cinema Camera 4Ks low light capabilities, Whinnery shot mostly at ISO 3200 while using the camera’s Dual ISO feature.

“Being able to shoot at ISO 3200 and knowing the footage would look good allowed us to use smaller and more portable lights. They were all LED lights that sipped on battery power instead of the more traditional M18s or 1Ks and generators. Our sound guy appreciated that as well,” he said.

Whinnery finished: “The usability on the new Pocket 4Ks was amazing and the Pocket 4K camera’s footage is beautiful. The image quality and the ability to record RAW is incredible. You simply can’t find a better camera for the price.”