NEW YORK—Spotlight, director Tom McCarthy’s powerful, new drama, tells the true story of the Boston Globe’s investigation of child molestation by Catholic priests and the subsequent cover-up by the local archdiocese. The film, released by Open Road Films, was edited by Tom McArdle in his fifth collaboration with McCarthy, dating back to 2003 and The Station Agent, the director’s feature debut.

McArdle and his crew spent 10 months cutting Spotlight at PostFactoryNY’s facility, with eight months devoted to picture editing, and two to sound, music and visual effects. The set up included editing and assist rooms along with offices for McCarthy and Post Supervisor Kelley Cribben. The main workstation was an Avid Media Composer v 6.5.4 on a 12-core Mac Pro with 16 gigs of RAM. The production stored 5 TB of media data on PostFactoryNY’s central ISIS server. 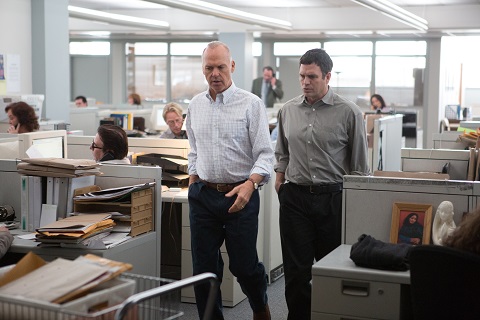 McArdle has cut each of McCarthy’s films at PostFactoryNY. “We are very comfortable there,” he says, “and that high level of comfort allows us to focus on the work.  It’s the best place in New York for editing movies; everyone wants to cut there.  A lot of talented people were working on our floor—Paul Haggis, David Simon, Brian Koppelman, et al.  PostFactoryNY has big rooms and a nice atmosphere.  Their Avids and tech support are top-notch.  It feels like a big rustic house for moviemaking.”

Stylistically, Spotlight has a similar feel to the tough, realistic dramas of the ‘70s, but more tightly wound. “The fact that it was based on real events and a real investigation influenced things,” McArdle says.  “It gave it a gradual build.  During the months of editing, we tried to make the film tighter so that there were no unnecessary moments.”

McCarthy likewise describes an editing process that was focused and deliberate. “It was all about pace and clarity in hopes of maintaining the tension and tone of the picture,” he recalls. “I usually take a few weeks off after the shoot and then Tom and I sit down and watch his first assembly. Then we go out for a steak and a few martinis, and wash it off. We get to work the next morning and keep editing until we think it’s ready. We do a number of small screenings along the way to push the cut forward.”

The film includes several montage scenes used to convey the scope of the newspaper’s investigation. McCarthy says they were among the most difficult sequences to cut. “The process is very tedious, going through directories and knocking on doors, that sort of thing,” he explains. “It took a while to get the pace right. We wanted to feel both the drive of the investigation and the tedium of the work. It was a fine line to walk.” 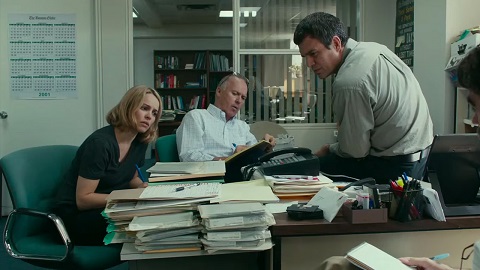 McCarthy says that PostFactoryNY provides an ideal environment for serious filmmakers to do great work. “It feels like home,” he insists. “It’s a unique place. They take very good care of you, big or small film, and they are good people.  They take film seriously and you feel that in their approach and support. Alex Halpern sets the tone for a staff that is consistently top notch.  And they were very kind to my dog—and she’s demanding.”

Backed by Toronto-based investment firm Granite Partners, the SIM Group is a leading supplier of production equipment, workflow and post-production solutions, with offices across the US, Canada and China. Our diverse services can be utilized on any production at any stage. In Canada, our offices in Toronto and Vancouver service grip and lighting from PS Production Services and can be complemented with SIM Digital cinematography and playback equipment for any production’s needs.  Bling, Chainsaw, Pixel Underground, Tattersall Sound and Picture and PostFactoryNY provide an array of services from dailies, to online and offline editing, to final color/DI and visual effects, to sound editorial and mixing. Bling’s services, which include a comprehensive workflow solution, are offered at all offices across the US and Canada, as well as off-site service through POD (Post on Demand).  Chainsaw’s full-service facility in Hollywood provides creative editorial and extensive finishing services with some of the top colorists in the industry. Rounding out the family of companies are Pixel Underground, a Toronto-based post-production company, and its associated service, StationEX, which provides physical and file-based media fulfillment and encoding/distribution services, Tattersall Sound and Picture, a provider of sound editorial and mixing for motion pictures and television and Post Factory NY, one of the East Coast’s top independent post-production facilities. For more information, visit simgroup.com