Presteigne starts 2016 with a bang

Presteigne Broadcast Hire supplied and co-ordinated the facilities for all programme transmission feeds for the ‘Bryan Adams Rocks Big Ben Live’ concert, fireworks, and outside broadcast for the BBC and its international and news clients on New Year’s Eve.

The scheme had the advantage of providing high quality feeds from and between the concert OB site at Central Hall Westminster, the fireworks OB site on Richmond Terrace, and BT Tower for inter-site and BBC network contribution feeds while simultaneously providing talkback circuits via the BT switch and permanent BBC tielines.

Presteigne backed up the terrestrial microwave links with a slightly slower, completely independent route via satellite, therefore establishing circuits with no single points of failure.

Presteigne CEO Mike Ransome said, “Our IP Mesh network enables us to monitor and control everything on the system at any point. For the New Year’s celebration, the terrestrial links and Comrex units at Richmond Terrace, as well as all IP network nodes, were all monitored and controlled from the main OB site at Central Hall.

Though used for non-broadcast services worldwide, the IP mesh network service is unique in broadcast hire to Presteigne and can be used to provide audio, data, IP and low bit rate interconnectivity for up to 15 separate sites over wide areas. As a private IP network it offers secure data transfer and is extremely reliable because it operates with RF filters on a single PMSE-licensed frequency.

Ransome added, “London’s world-famous fireworks display over the River Thames, and the coverage of them, are iconic. As well as thousands of people lining both banks of the Thames, and millions watching the concert and fireworks on TV around the world, the event has in recent years been one of the UK’s most-watched live TV programmes, so it’s important to start the New Year right, and we did. The rig, and operation, worked perfectly.” 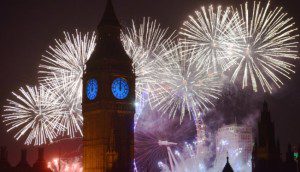