Authentic natural sound can make the difference between a powerful and compelling video and a bland, weak production. In many cases, sound is more important than the video image.

When Charles Kuralt hosted CBS Sunday Morning in the early 1980s, my Miami-based video crew often shot the end of show’s “nature” segments. We might be anywhere — even in countries at war — looking for the serene natural locations that are still popular with viewers today. A key component that made those segments so compelling was authentic natural sound.

Natural sound consists of the ambient auditory sensations that define a place. It should never be confused with sound effects, foley or music. Yes, you can buy sound backgrounds, but they are rarely as effective as recording the genuine sound at the actual place.

When shooting video, it is important to capture this natural environmental sound in every shot. In the analog era, we recorded natural sound directly to the video sound channels. Today, with high-quality, portable multitrack digital recorders, sound is often recorded in either stereo or immersive formats for syncing with the picture.

As a rule, never record natural sound with the internal microphone of a camera. Perhaps have the mic activated to hear the scratch track for syncing purposes, but the sound from internal mics is not good enough for production. Many people have learned this the hard way.

It is important that sound operators always be aware of the sonic environment they are working in. In a factory, natural sounds of machinery are essential to the images. On an open highway, cars whizzing by are an important background sound. In pristine surroundings, the subtle sounds of the quiet environment are neccesary to making the scene authentic.

Now, with a wide choice of low-cost equipment, some video makers record natural sound on iPhones or other low-cost recorders. Since most “content creator” gear is designed for voice or music recording, this can be a problem. Nature recording tends to demand higher-quality, lower noise recordings made at high bit rates.

Natural sounds exist without dependence on humans. Even the most uninhabited places have unique sounds. This could be trees rustling in the wind, the patter of rain drops or the sound of birds chirping. These are universal sounds that inspire relaxation and serenity.

Recorded environments can be natural, human-made or a blend of both. Human sounds exist solely because of the activities of people. An example of these human-produced sounds are motor vehicles, machines and or background chatter. 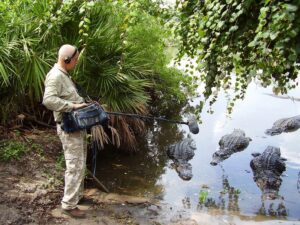 Combined natural and human-made sounds are most prevalent, and it is often difficult to record one without the other. This a fact of life for audio recordists working in the field. Even in the most isolated spaces, it can be difficult to record uninterrupted natural sounds for modest periods of time without human interference.

There is some natural sound almost everywhere (perhaps with the exception of sonically sealed studios). No natural place on earth is totally silent. Even in the quietest areas there is at least the sound of weather. Since we live in a natural world, the audio recordist must listen to it carefully and be aware of even the most subtle sounds.

This level of listening can be surprisingly difficult for beginners. A good starting point can be to just listen and focus on a single sound. Be aware of what the camera is seeing and find a sound that suits that scene. One has to train the ear to hear sounds in a place. Most of us ignore the ambient sounds around us.

For newcomers, it is helpful to listen to the work of experienced sound recordists. This can open the door to new techniques and approaches to recording. For example, experiment with different microphone placement since some sounds are different when recorded from above rather than below. And pay attention to the time of day of the recording. Sound can change depending on the time it is recorded.

As for the right gear, a high-quality portable audio recorder with a wind-protected cardioid shotgun mic is common for network crews. Recording the sound with an M/S stereo microphone adds sonic realism and is easy to match with the picture in post.

A recent technical breakthrough is the new generation of 32-bit float recorders, which offer high dynamic range without having to set levels. New 32-bit float portable recorders from Sound Devices, Zoom and Tascam are excellent for capturing the wild fluctuations of sound levels in the field.

Sennheiser, RØDE and Zoom make four-channel immersive microphones that can help record powerful 3-D sound for video. Immersive or spatial audio allows the viewer to hear sounds with not only the ears, but feel it in the body.

Say a huge tree falls in the forest. When the tree hits the ground, the audience both hears and feels the impact of it. Water running in a nearby creek is very relaxing. Beyond hearing it, immersive sound affects your body’s whole energy field. This type of sound can be subtle, but it can make a major difference in the overall visual experience.

Immersive sound is relatively new and opens huge new possibilities for natural sound recording, both for video and audio-only programming. The technology has now reached a point in development where it is possible to record and listen to immersive sound in home environments or on headphones. Leading technologies in this work are Dolby Atmos, WFS, Auro-3D or Sony 360.

Creative natural sound recording has long been a powerful aid to visual storytelling. With immersive technologies, the possibilities are now endless. Never take environmental sounds for granted. They are a key to adding impact to your video production.