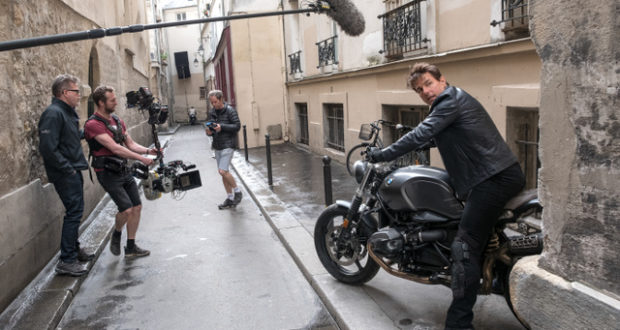 Left to right: Director Christopher McQuarrie, B Camera/Steadicam Operator Marcus Pohlus and Tom Cruise (right) on the set of MISSION: IMPOSSIBLE – FALLOUT, from Paramount Pictures and Skydance. The Lectrosonics SMV transmitter is located next to the wind-protected shotgun microphone. 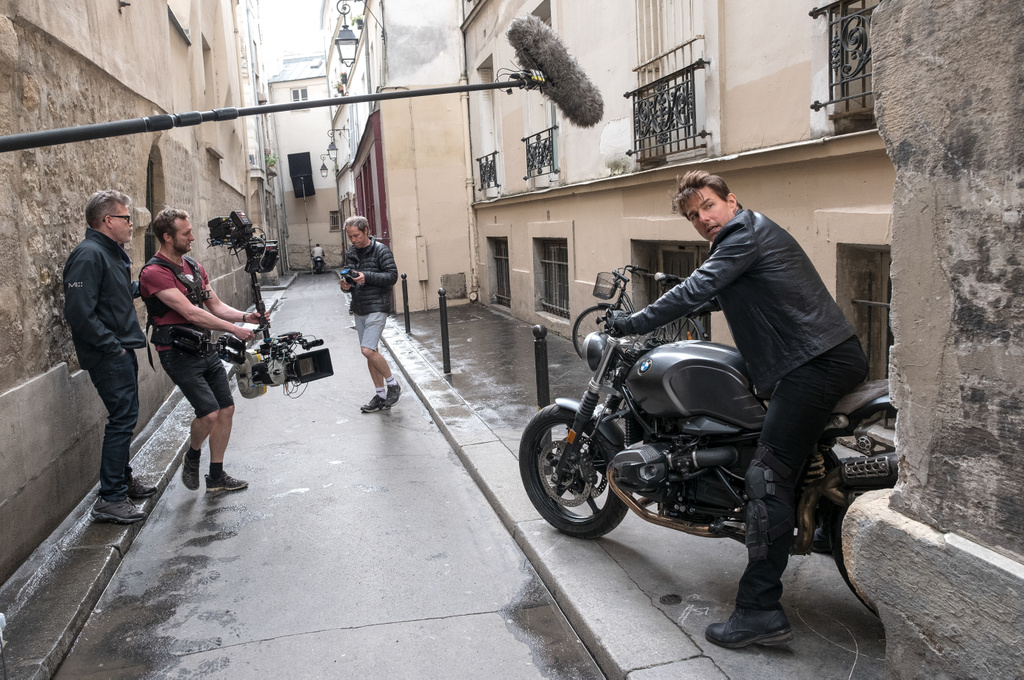 Oxfordshire, UK (August, 2018) — Tom Cruise, who famously performs many of his own stunts, doubles down on the derring-do in MISSION: IMPOSSIBLE – FALLOUT, the latest installment of the spy thriller franchise. Multi-award-winning British production sound mixer Chris Munro had to up his game to cleanly capture Cruise’s dialogue as the action star clambered aboard a moving helicopter, leaped from a high-altitude jet and sped through the streets of Paris, using Lectrosonics PDR Portable Digital Audio Recorders, as well as his existing arsenal of Lectrosonics Digital Hybrid Wireless equipment.

“I used Lectrosonics on M:I – FALLOUT because of the range that could be achieved during the challenging car chase and helicopter sequences,” says Munro, who relied on SMb transmitter belt packs for this production. For those situations where it was impractical to use wireless mics, including the skydiving sequences and some of the helicopter sequences, Munro used Lectrosonics’ PDR, a device the size of a small body pack that captures 24-bit, 48 kHz digital audio onto a Micro SD card with synchronized internal or jammed external timecode.

“We used the Lectrosonics PDR recorder quite a lot, mainly for the small size, but also for the timecode capability, as we were shooting very long takes on the helicopter sequences,” he says. “We also used a PDR to record all of the helicopter comms. This was particularly useful for the editor, as he could hear directions from the director, Christopher McQuarrie, which allowed him to identify which parts of the film were to be used.”

HALO or High Altitude Low Opening is a military technique that minimizes the time a parachutist spends in the air, free-falling at terminal velocity for a period before opening the parachute as low as 2,000 feet above the ground. For the film, Cruise jumped from a Boeing C-17 transport jet flying at 25,000 feet.

“The bone conduction units that I used were specifically designed for military use,” Munro elaborates. “I used them with the Lectrosonics PDRs, connected to the helicopter avionics using interfaces that were designed and built by our technical engineer, Jim McBride.”

Munro got his start in production sound in the early seventies and has been using Lectrosonics since his first film project in the United States. He didn’t own any Lectrosonics equipment until the mid-nineties, when the company introduced versions that operated in Europe’s radio frequency spectrum.

Munro says, “I typically use six channels of radio mics, though of course it could be more,” although he uses booms mics whenever possible for their superior fidelity. “That is not to say that I don’t appreciate radios,” he says, “but that I value them as tools that contribute to getting the best sound possible.”

MISSION: IMPOSSIBLE – FALLOUT was filmed at locations around the world. Despite the density of RF traffic at some of the locations, Munro and his team had no major problems, he says. “We were very fortunate in New Zealand as frequencies were not an issue. Paris and London were a little trickier, but my crew and I always take time to make a good frequency plan.”

About Lectrosonics
Well respected within the film, broadcast, and theatre technical communities since 1971, Lectrosonics wireless microphone systems and audio processing products are used daily in mission-critical applications by audio engineers familiar with the company’s dedication to quality, customer service, and innovation. Lectrosonics is a US manufacturer based in Rio Rancho, New Mexico. Visit the company online at www.lectrosonics.com.