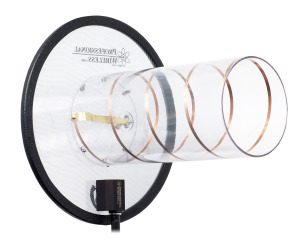 The Latin GRAMMY Awards, presented by the Latin Academy of Recording Arts & Sciences, recognize outstanding achievement in the music industry. Unlike the regular Grammy® Awards, which primarily honors music produced in the United States, the Latin Grammys recognize music recorded in either Spanish or Portuguese, produced anywhere in the world.

During the festivities, the PWS team, led by lead RF coordinator James Stoffo, was onsite to monitor the RF spectrum and ensure that the show ran smoothly, with any potential interference issues quickly resolved. Brooks Schroeder was the lead coordinator on the green carpet, coordinating and managing all pre-show frequencies and working alongside Stoffo to ensure that there was no interference leading up to the main broadcast. In total for the evening, PWS coordinated and managed more than 200 frequencies.

This marks the first year that the event was held at the MGM Grand, which presented some new challenges for the PWS team. “The MGM facility is not shielded, so we were being bombarded with a significant amount of television frequencies inside the venue, which we hadn’t experienced in prior years,” says Stoffo. “We also had to coordinate frequencies with KÀ, the neighboring Cirque de Soleil show, which in itself uses 100s of frequencies within the spectrum. It was a big undertaking but one that we were able to manage as a team through constant communication.” 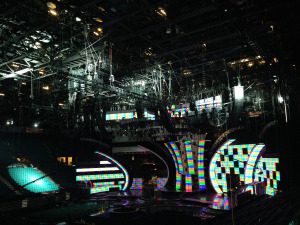 For the pre-show green carpet activities, PWS supplied six Telex BTR-800s, as well as multiple Lectrosonic IFB systems and Shure UHF-Rs. For the live broadcast, PWS supplied four Telex BTR-800s, along with four PWS Domed Antennas and four PWS Helical Antennas. PWS also utilized a RAD UV-1G Enhanced Narrow Band™ wireless intercom system for the main event, which provided PWS with the ability to use frequencies that would not interfere with the more than 200 existing frequencies already in use for the live broadcast.

Aside managing the abundance of active wireless devices during this event, PWS was also faced with a challenge in terms of the layout of the hardware on stage. “The PWS antennas were all at concourse level, positioned behind video walls,” says Stoffo. “The video walls not only radiated RF interference but also blocked the antennas from picking up the microphones on stage by obstructing the clear line of sight. We were able to resolve the issue through the use of highly filtered wireless microphone systems and our helical antennas, as the circular motion of the RF field emitted by the helical antennas reduces the risk of drop-outs and guarantees the strongest possible signal.”

With PWS’ support, the Latin GRAMMY Awards’ live broadcast remained free from interference for a successful event. “Doing a live broadcast from the Las Vegas Strip always presents a unique set of challenges from a wireless coordination standpoint,” says Jim Van Winkle, general manager, PWS. “It was great to be able to work alongside the talented professionals at ATK Audiotek, which supplied the show’s PA and monitor systems, as well as the wonderful team at Univision, once again. With our experience and expertise, the services and equipment we provided helped to ensure that the show once again went off without any hitches.”