Writing a screenplay is not only a craft in storytelling but also in formatting. Studios have teams of script readers who filter hundreds of submissions, passing along the most substantial scripts. If your screenplay is not in the correct format or looks hard to read, it goes in the trash.

Screenplays require a particular page layout. This sets the standard of one written page equaling one minute of screen time. When it’s set correctly, this is a reasonably accurate approximation.

This article isn’t going to focus on margin setting; instead, it shows some best practices when writing your screenplay to give it the best chance of getting past “the gatekeeper.” 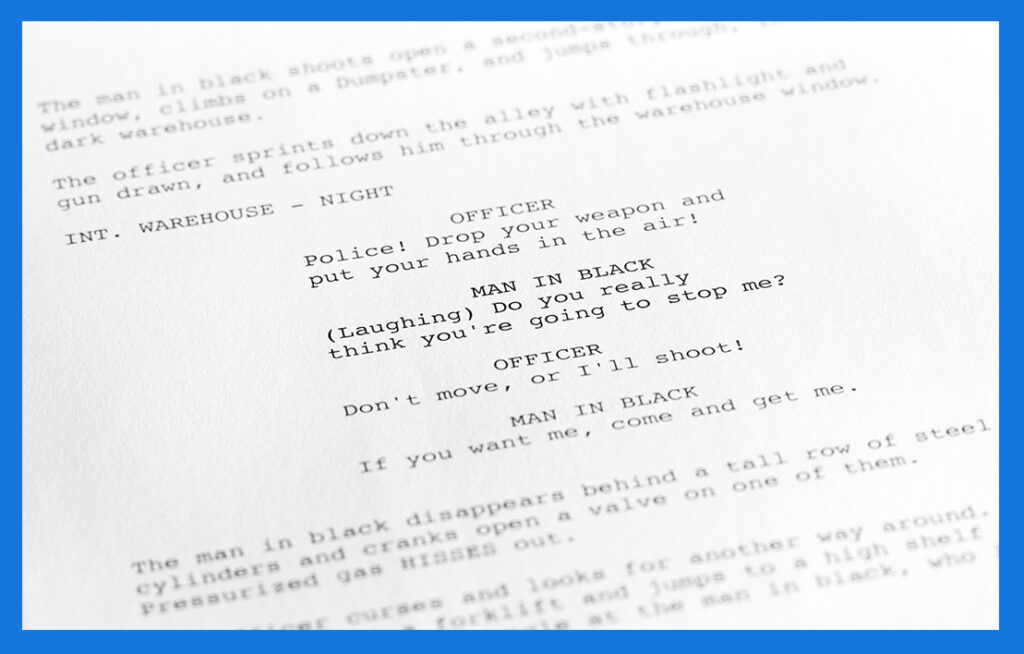 Screenplays are not novels. They need to be restricted to what will be seen explicitly on screen. Artistic prose only adds dead weight. Each scene has a specific title on its own line, followed by a brief description below it and character dialogue formatted near the center margin of the page. There are a few common variations of this format, namely the Cole & Haag and Warner Bros. layouts. They are virtually identical, with only minor differences in margin measurements.

The safest option is to use an application called Final Draft. The margins are preset and almost universally accepted across the industry. All you have to do is understand a few rules and then start typing.

The title page is painfully simple. It should only feature the title of the screenplay and the writer’s name in the center of the page and contact information on the bottom left. If it’s based on another work, you can note that below the writer’s name, but other than that, the title page is complete. Do not include fancy fonts, text effects, images, borders, unique stationery, taglines, summaries, or any additional information.

Do not include page numbers on the title page, nor does the title page count as page one. The first page of the actual screenplay is the “fade in” page and does not display a page number. Numbering begins on page two and is consistently formatted as the number with a period, “2.” Every page from here follows this format.

Scene headings identify where a scene is and when it is taking place. It also determines if it’s an interior or exterior setting. They are always on their own line and look like this:

In a screenplay, a scene is defined as a change in time or location, and these changes must result in a new scene heading. If John is at the beach until nighttime and walks to the bar and goes inside, those are four distinct scene headings: 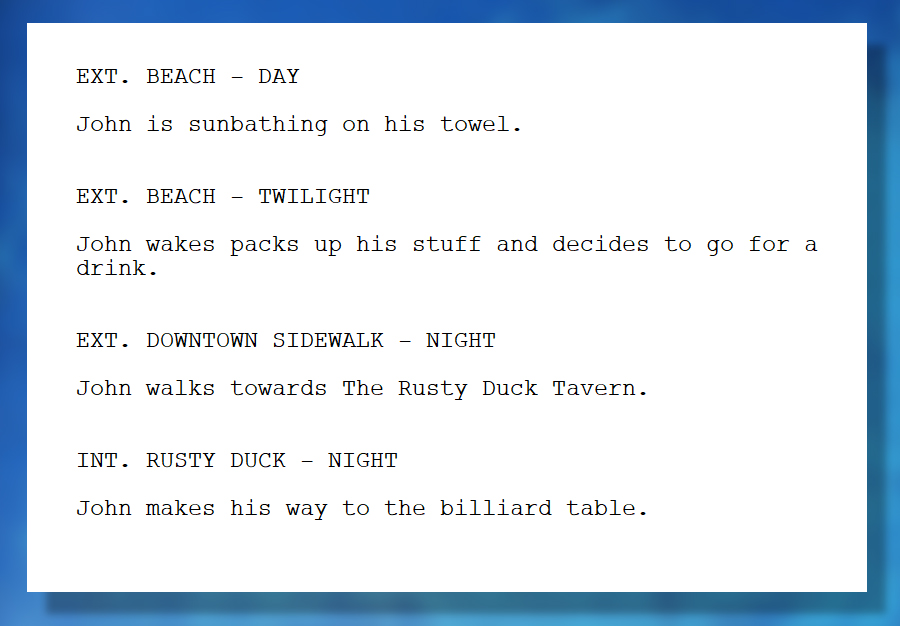 The format keeps the script looking clean and aids in pre-production organization. Do not label your scenes with numbers unless this is a shooting draft. That is typically reserved for the director’s script and the production team.

Scene descriptions serve only to set the scene and do not include anything that cannot be visually represented on screen (such as backstories or character thoughts). Descriptions are always written in the present tense and don’t include vocabulary such as “we see” or “we hear.” This is redundant; we assume anything written will be seen or heard.

Avoid specifying scene transitions unless it is integral to the storytelling, and never include any camera direction (professional faux pas) unless you are producing this film yourself.

When introducing a character, format their names in all caps to indicate that this is their first screen appearance. All subsequent mentions are formatted normally. Limit character descriptions to vital information (age, identifying features, gender, etc.). Loud sounds, cues, or anything that stands out in a scene should also be capitalized. (DOORBELL).

You can use character actions to paint settings more effectively than static descriptions. Instead of:

Writing character interactions is where many new screenwriters tend to trip up. There are many subtle rules and standards that are expected—dismissing these screams “amateur.”

For dialogue, the character name is written in all caps, located near the center margin with their lines centered below. This layout makes script reading flow better and adheres to the one page to one minute guideline.

New writers tend to over-direct their characters and abuse the “parentheticals.” These are actions or notations written in parenthesis between the character’s name and spoken dialogue. These parentheticals can be valuable tools but should be implemented sparingly. Most of the time, character reactions can be derived contextually from the scene and not have to be spelled out. For example: 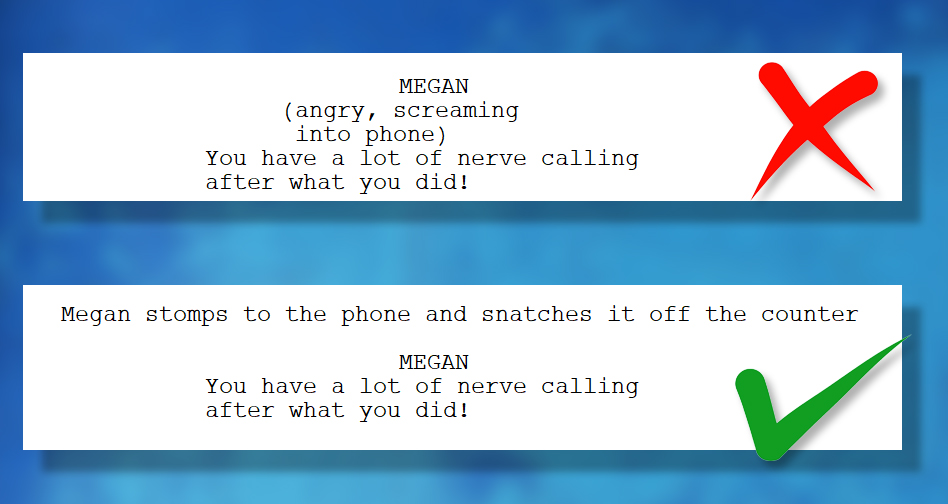 Many professional actors are irritated by excessive parenthetical direction. It is their job to give a character life, and a good actor will take the scene’s context and carry it.

That said, there are several ways to use parenthetical directions effectively. If a character is speaking off-screen or off camera, then (O.S.) or (O.C.) is acceptable. (V.O.) is used to distinguish a voice-over, and (BEAT) or (PAUSE) can be used to point out a break in their delivery.

Parentheticals can help distinguish who dialogue is directed at; (towards June) if there are multiple characters in a scene.

If your character speaks another language, do not write their dialogue in that language. You risk losing the reader if they cannot read it, so the better practice is to write the dialogue in the same language as the script and use the parenthetical to declare a different language: (in Spanish, with subtitles).

If two characters are speaking at the same time, a “Side-by-side” format is used.

The true art of writing a screenplay is being able to convey a strong story through a tightly woven format. Scenes should be direct, and large blocks of text should be avoided. The more white space on a page, the more appealing it is to the script reader who has another hundred submissions to get through after yours.

The Final Draft application comes with a suite of screenwriting tools and is one of the best purchases a screenwriter can buy. Visit www.finaldraft.com and start working on your masterpiece.