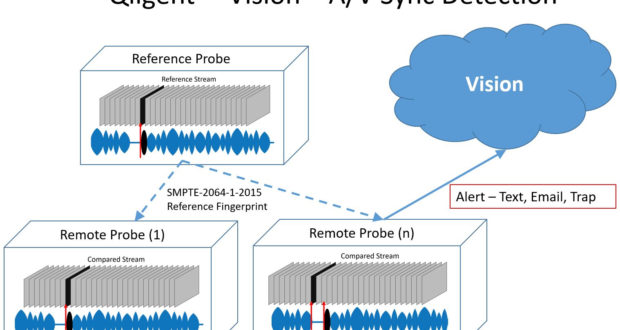 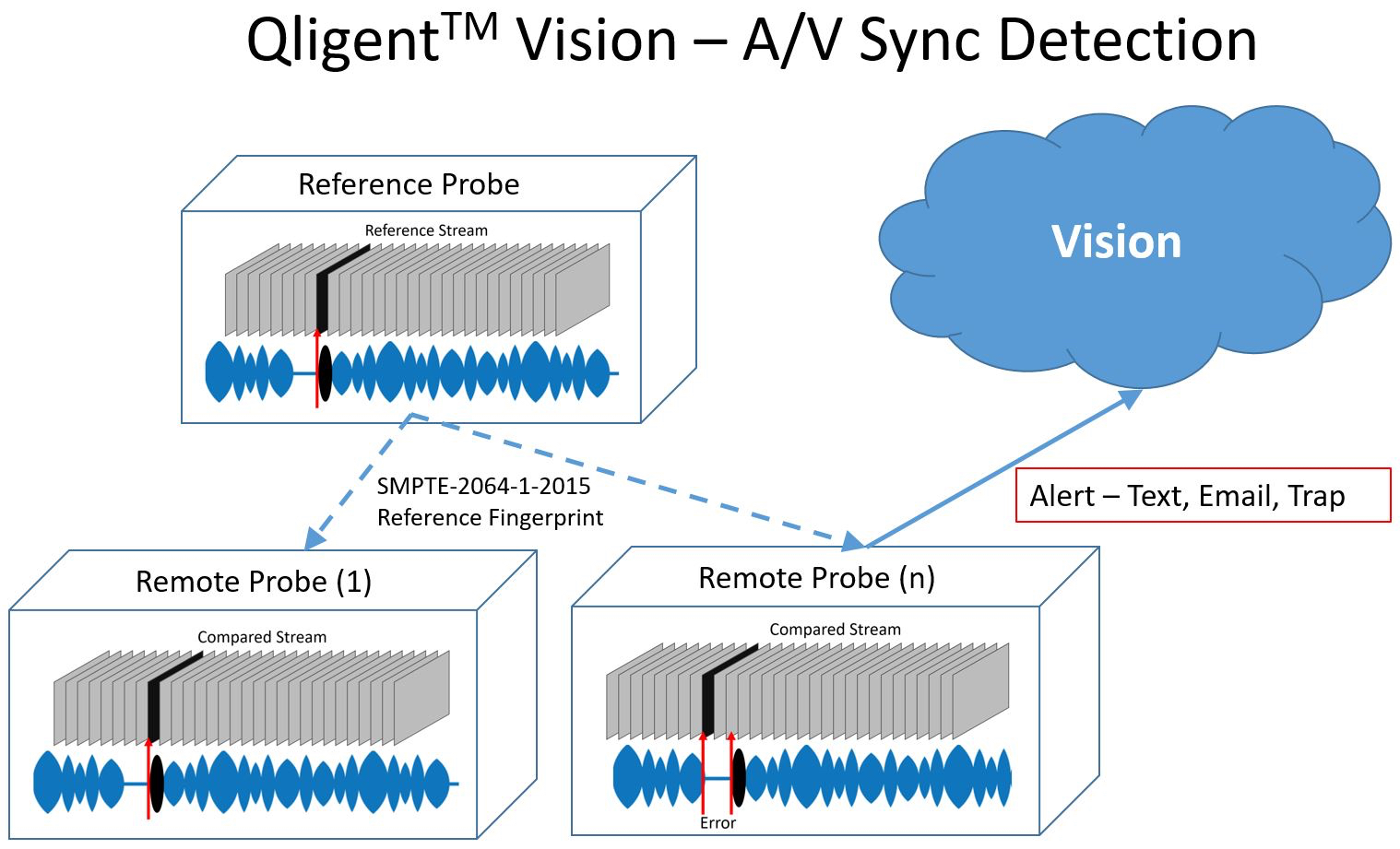 As a new feature within the Qligent Vision’s Match module, A/V Sync Detection provides an automated, software-based way to spot A/V sync (or lip-sync) problems that may have occurred anywhere in the distribution domain to the last mile—including over the air, satellite,cable, IPTV, or OTT media distribution—and alerts on-air operators so they can take the appropriate action to get them resolved quickly.

More importantly, this real-time feature is self-synchronizing and doesn’t require any sort of test signal to work. Based on Vision’s Match technology, A/V Sync Detection works by comparing the audio portion of downstream video with its original “known good reference” to determine if the A/V is in sync, or if it has drifted out of sync.

To do this, Vision probes gather key data at various points along the distribution path, including content origination, satellite up/downlinks, head-ends and even out to the homes, and the platform-wide trend analysis and cross-correlation engine compares all the findings.

“If the probes detect that the video and audio are out of sync, whether leading or lagging, they report every instance where the variations occurred and for how long, down to millisecond accuracy,” said Ted Korte, Qligent’s COO. “Systems administrators can then use this frame-accurate data—which is reported as a text, email or other type of notification—to deduce the root cause of the problem.”

As a platform-independent solution, A/V Sync is also not tied to any particular physical layer, codec, or distribution platform. And, as a SMPTE 2064-compliant technology, A/V Sync Detection works in all types of signal environments, including SDI, IP, or any of the new SMPTE 2022 and SMPTE 2110 SDI over IP standards.

“Despite the industry’s best efforts, lip-sync issues have plagued Media & Entertainment professionals since the dawn of broadcasting. Any media processing step that’s done at any stage of content distribution—such as encoding, multiplexing, splicing, insertion or transcoding—can knock a program’s video and audio out of sync,” Korte said.

“It’s become even more challenging today because many third-party networks can carry and deliver a program to the viewers, and no one entity controls the end-to-end chain anymore,” said Korte. “We’re empowering broadcasters by giving them the means of determiningwhere the A/V sync fell apart, even if it occurred on a third-party distribution platform, so they can alert the responsible parties and maintain quality control.”

A/V Sync Detection is a component of the Vision Match module, which handles a broader array of broadcast monitoring and QC functions. By performing real-time automated comparison of the transport stream’s video and audio, Match can flag a wide range of program-related inconsistencies that are otherwise difficult to detect as the signals move across today’s multi-platform distribution platforms, including:

Vision customers will be able to download the affordable new A/V Sync Detection software as soon as it becomes available, sometime later this year. By unveiling this new capability at IBC 2017 (at Stand 8.E47), Qligent executives hope to spark discussions with interested broadcasters about their A/V Sync challenges, and show them how this new feature will go above and beyond to address the problem throughout the delivery domain.